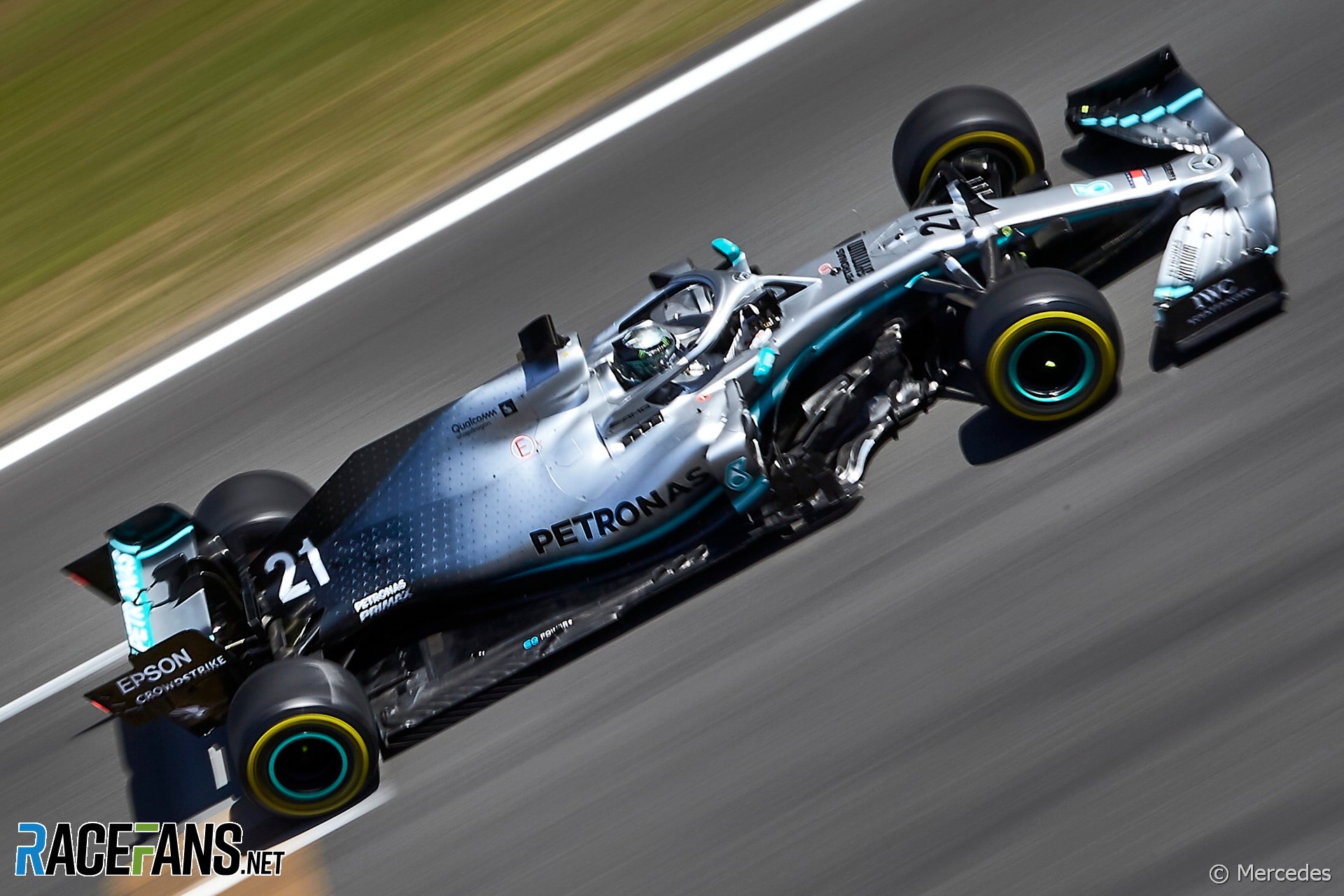 The 2019 F1 season will be remembered as the year Lewis Hamilton won his sixth world championship, Honda rediscovered their winning ways with Red Bull, and Charles Leclerc made his remarkable debut for Ferrari.

A few other surprising stories flew under the radar. Here are a few notable but not-so-memorable moments from the past 12 months.

After being taken over by Lawrence Stroll’s consortium, Force India needed a new name. They eventually settled on Racing Point, but as RaceFans revealed they nearly revived the old Lola name for 2019.

They might not be Racing Point for long – earlier this month we broke the news Stroll could be about to buy into Aston Martin.

Daniel Ricciardo gets an enormous amount of attention at his home race, but recently said he wants to scale back his commitments when he returns for the season-opening Australian Grand Prix next year.

The 2019 race – his first start for Renault – got off to a terrible start. Just seconds after the lights went out he strayed onto the grass run-off and ripped the front wing off his RS19. Fortunately his season eventually improved.

Not much went right for Pierre Gasly at the start of the season. In Azerbaijan the then-Red Bull driver missed the weighbridge when summoned during practice, meaning he would have to start the race from the back.

Qualifying therefore became an irrelevance. Yet surprisingly he set the fastest lap in Q1 – the only time he headed a qualifying round all year. Suspicions arose when his time was then scratched by the stewards, who ruled his fuel mass flow had exceeded the maximum permitted rate.

Had the team taken advantage of the opportunity to run some more aggressive settings on his car? If not, it was quite a coincidence.

It was a doubly frustrating Friday for Williams in Baku. First George Russell’s car was seriously damaged when he hit a loose drainage cover.

Then his Williams was further damaged when the recovery truck driver hit a bridge, spilling hydraulic fluid onto the FW42. The race promoters sent Williams flowers and an apology.

Later on in the same qualifying session, Mercedes pulled a fast one on Ferrari. With the slipstream proving so powerful on Baku’s long straights, they wanted to ensure other teams – especially rivals Ferrari – wouldn’t be in a position to benefit from it.

They cooked up a cunning plan. Valtteri Bottas and Lewis Hamilton pulled out of their pit boxes late in Q3, prompting Sebastian Vettel to follow them. His team mate Charles Leclerc had already crashed, so the silver cars represented his best chance of getting the vital slipstream.

But Hamilton and Bottas pulled over at the pit lane exit, ostensibly to perform ‘practice starts’. Vettel drove past, set his lap time without a slipstream, qualified behind the Mercedes pair – and finished the race there too.

Nikita Mazepin made up the numbers in Formula 2, scoring just 11 points in a campaign which was chiefly notable for the huge crash he triggered in Russia. But he also managed to land himself a Mercedes test gig.

He was quickest of all on his day in the car, 1.3 seconds ahead of the next-quickest driver. However Mazepin couldn’t quite match Bottas’s time in the W10 at the Circuit de Catalunya.

Perez almost ran over a marshal

One of the more shocking moments of the season came at Monaco, where Sergio Perez had a near-miss with two marshals who were standing where they shouldn’t during a Safety Car period.

Ferrari initially announced their team would be officially called Scuderia Ferrari Mission Winnow in 2019. However after a few races the controversial branding, linked to tobacco brand Philip Morris International, disappeared. It returned later in the season, but the logos were missing from their car for most of the season.

Kubica was un-voted Driver of the Day

Robert Kubica initially topped the official Formula 1 Driver of the Day poll for the Austrian Grand Prix. This seemed an odd achievement for a driver who finished three laps down in last place and was almost lapped by his team mate.

Following an investigation, F1 decided some of the votes it had counted for Kubica were “incorrect”, and confirmed he hadn’t even been among the top three drivers.

Gasly had to be told to let Verstappen pass him

While Gasly’s difficult season went on, he didn’t exactly endear himself to Red Bull by failing to play the team game. Having been warned several times by his race engineer not to hold Max Verstappen up at Silverstone, team principal Christian Horner had to get on the radio to tell Gasly to move aside.

Mercedes sponsored the German Grand Prix and turned up in a retro livery to celebrate 125 years of motorsport. The part-white colour scheme referenced a (debunked) story about how the team once scraped the paint off its cars in a bid to save weight.

Amusingly, applying the new livery for this race had the opposite effect on the W10. “In all the briefing sheets prior to this weekend the engineers pointed out ‘too heavy stickers’…” team principal Toto Wolff remarked to RaceFans. Nor did it help their cause – the team posted their worst result of the season at their home race.

Lando Norris almost crashed his McLaren before the wet German Grand Prix began. He was the first driver to discover how treacherously wet the drag strip run-off area at the final corner had become, a detail he kept to himself.

“Obviously I’m not going to tell anyone because I’ll let them try it out,” he admitted afterwards. It was a detail his team mate might have liked to know – Carlos Sainz Jnr spun on the same patch on lap 19 of the race and nearly crashed out.

Gasly went off three times in four laps in Germany…

Red Bull team principal Christian Horner was not too impressed with Gasly’s efforts in Germany, pointing out he went off three laps in a row at turn one. It wasn’t quite that bad – but it wasn’t far off.

… and Hamilton nearly gave up a points finish

For the second time in his career, Hamilton ended a season having scored points in every race. That wouldn’t have happened had the team retired his car in Germany as he asked them to after crashing and spinning to the rear of the field. He finished 11th on the road, but was promoted to ninth place and two points due to penalties.

Renault crashed on their way to a race

The Hungarian Grand Prix went wrong for Renault before they even got there. One of their trucks left the road on a motorway.

Things didn’t improve much once they arrived at the Hungaroring, as neither Daniel Ricciardo nor Nico Hulkenberg finished in the points.

The black-and-white flag reappeared – then disappeared

During the Hungarian Grand Prix race control grew concerned by Kevin Magnussen’s defensive moves against Ricciardo, and gave the Haas driver a verbal warning. At the following round, Spa, FIA race director Michael Masi reinstated the use of the black-and-white ‘unsporting conduct’ flag for this purpose, which he described as being F1’s equivalent of football’s yellow card. During the race, Gasly became the first driver to receive the signal for nine years.

The flag reappeared a week later, more controversially, as it was shown to Charles Leclerc after he squeezed Hamilton during their fight for the lead. Some felt Leclerc had been fortunate to get away without a penalty. The flag wasn’t seen again for the rest of the season. Will it return in 2020 or has it been quietly dropped?

Qualifying descended into farce at Monza

F1’s draggy 2020 cars liked a slipstream, and that made for some interesting tactics at tracks with long straights. At Monza the 10 drivers in Q3 spent so long dawdling behind each other trying not to be left without a tow that almost no one got their final laps done before the chequered flag fell.

Nico Hulkenberg, Carlos Sainz Jnr and Lance Stroll were all reprimanded for the shambles. Amusingly the latter was making his first appearance in Q3 for a year, yet failed to set a time in it because of the time he wasted backing off.

Ricciardo was disqualified for a ‘0.000001 second’ advantage

When Ricciardo was thrown out of qualifying in Singapore because his MGU-K momentarily delivered too much power, Renault claimed the performance advantage was incredibly small.

Between them Mercedes, Ferrari and Red Bull had led every lap of every race for more than four years. But in Singapore, thanks to Ferrari telling race leader Leclerc to run a very slow pace at the start, that finally came to an end.

When the front-runners pitted Antonio Giovinazzi inherited the lead. The Alfa Romeo driver’s four laps at the front of the field were the only ones not headed by one of the ‘big three’ teams all season.

Last year the Canadian Grand Prix finished early when an error meant the chequered flag was waved too soon. In a bid to prevent that happening again, the FIA announced that from 2019 the flag itself would not officially signal the end of the race, and that a chequered flag light panel would be used instead.

But at Suzuka that light panel was shown too early, and the result had to be taken from the end of lap 52 instead of lap 53 as a result. This meant, among other things, that Sergio Perez still scored points despite crashing out on the real final lap.

That rules change has already been reversed for next year.

While some drivers refused to let their team mates pass them when they were told to, one voluntarily gave up a place when his quicker team mate caught him. Norris let Sainz by in Brazil, helped his team mate to the team’s first top-three finish for five years. Perhaps he felt guilty about Germany…

Ferrari came out to play

Having previously refused to take part in F1’s official ESports series, Ferrari finally joined in and were glad they did. Their driver David Tonizza won the championship.

Only one Mercedes driver didn’t get a power unit penalty

Mercedes’ power units have previously been bullet proof. But in 2019 five of the six Mercedes-powered drivers exceeded their maximum allocation of parts and had to take grid penalties.

Who was the only Mercedes-powered driver who avoided a penalty? World champion Lewis Hamilton.

In 2005 back-of-the-grid strugglers Minardi infamously ran Chanoch Nissany in one of their cars during first practice for the Hungarian Grand Prix. He was hopelessly off the pace, lapping almost seven seconds slower than Robert Doornbos in their other car, who himself was five-and-a-half seconds off the pace setters.

The back-of-the-grid strugglers of 2019, Williams, returned the Nissany name to F1 in post-season testing. Nissany’s son Roy drove the FW42 at Yas Marina, and was at least closer to the pace that his father was. He ended the test 3.7s off the next-slowest car…

What are your favourite stories from the 2019 Formula 1 season? Share them in the comments below.

9 comments on “Forgotten these already? 24 unusual tales from the 2019 F1 season”