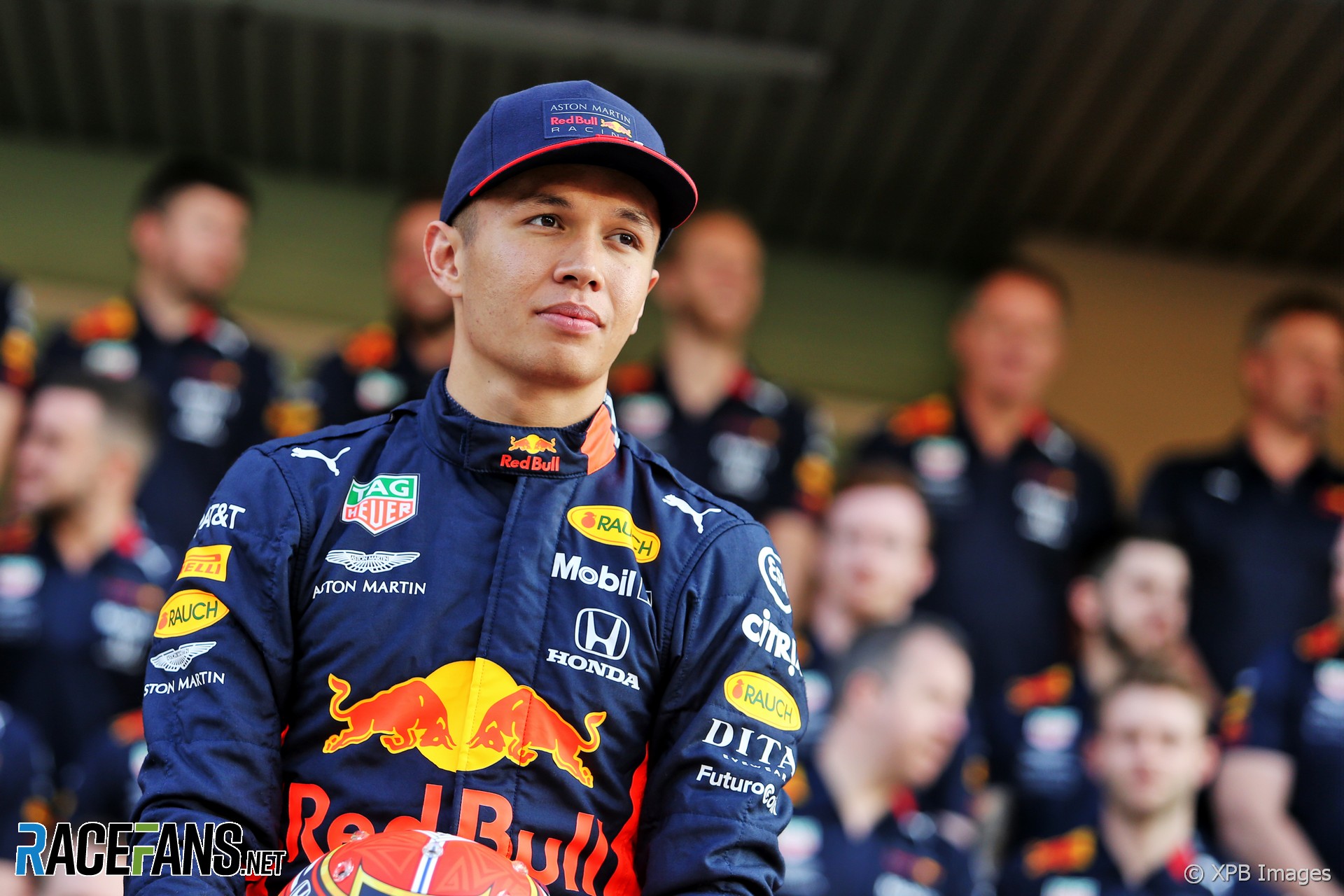 Alexander Albon was the unexpected success story of last season.

Just 12 months ago he was yet to drive a Formula 1 car. By August he had been promoted from Toro Rosso to Red Bull – a remarkable rate of progress.

While Pierre Gasly’s difficulties at Red Bull created the opportunity for Albon to move up, his steadily improving performances for Toro Rosso gave Red Bull the confidence to take a gamble on him.

Albon named Silverstone and Hockenheim as two of his stand-out performance at Toro Rosso. To that we could add his debut points finish in China, achieved despite a heavy crash which ruled him out of qualifying.

Moving up to Red Bull inevitably meant a direct comparison with one of the best in the business – Max Verstappen – who was already well-versed in the nuances of the RB15. The result was predictable – Verstappen out-paced his team mate by an average of more than half a second.

Albon believes the key to narrowing that gap is to “focus on myself” and shut out external distractions. “It is a team sport but it’s very individual in the way that you have to approach your driving.

“Putting myself first in terms of questioning where I need to improve and what I need to do to be better, that’s been the main thing for me.”

“And just take it a bit easier in free practices,” he added. “Try not to overdrive too quickly.” Shanghai wasn’t the last of his prangs – he shunted the Red Bull during qualifying in Sochi. But again he bounced back impressively, and brought the car home fifth on race day.

After joining Red Bull in Belgium, Albon lagged further behind new team mate Verstappen than he had compared to Daniil Kvyat. He says there is a “combination” of different aspects he needs to improve such as “Driving [and] getting the confidence in the car.”

“I always put myself first,” he explains. “It’s always the driving first and then work around it.

“F1 is not that simple. It doesn’t tend to be one thing, it tends to be a group of things. And of course experience as well. Just coming to tracks, knowing what to do with whatever it will be, [using the] tools during the lap and things like that, it just takes a bit of time.”

Albon discovered new complexities to qualifying after moving up to Red Bull. “You can build up to it,” he explained. “The sim helps. And by the time you’re in final practice you more or less know what to do.

“It’s always different once you get qualifying with fuel and the track evolving so much. Tracking that progress through qualifying is a bit different. With Toro Rosso I wasn’t always in Q3, so it’s still understanding which way the track goes. Charles [Leclerc] was saying that sometimes when he first joined Ferrari that kind of understanding how the track tends to grip up, so it’s the same.”

Although at the end of last season Albon was still some way off Verstappen’s pace, he believes he can keep narrowing the gap.

“It was a bit just trying to understand the sweet spot, more or less, because I think Toro Rosso understood it a bit more,” he said in Abu Dhabi. “With this car I’m understanding it but it’s just a learning process.

“I’ve had a few instances that I haven’t done qualifying, various incidents in practice, but it’s just chipping away at it and I am feeling better with the car, always. It is still [about] trying to find the lap time out of it which, of course, Max is showing. I’m getting there.”

While Albon’s qualifying performance are the clearest area for improvement, he regularly delivered on the opportunities available to him during last season. There were only two occasions when he started inside the top 10 and finished outside it.

In Britain he was struck by a power unit problem which meant he couldn’t pit and had to run a long stint on worn tyres, ruining his race. Then in Brazil he was on course for a podium finish when he was hit by Lewis Hamilton.

He still found some positives in that Interlagos weekend despite the disappointing result. “When I look at the weekend as a whole, it was a good weekend,” he said. “There was some areas still to improve but there are more positives there.”

Following his promotion to Red Bull, Albon consistently brought his car home among the front runners, which was all that could reasonably be expected of him following such a late promotion. In 2020 he will need to make a case for Red Bull to keep him in the seat long-term. But he has plenty of causes to be satisfied with his start to life in Formula 1.

“It’s been good,” he said. “I sometimes have to tell myself that I am still a rookie because it does feel like being in Red Bull that kind of feeling goes away just with expectations and things like that.

“But on reflection, I am happy with it. Not just the good moments and things like that. I think it’s just human nature and it’s who I am, I am hard on myself and I do want to improve all the time. I feel like I don’t want it to be an excuse that I am a rookie.

“It’s part of me and it’s my drive to just improve as a driver. I know there’s still scope for me to improve.”