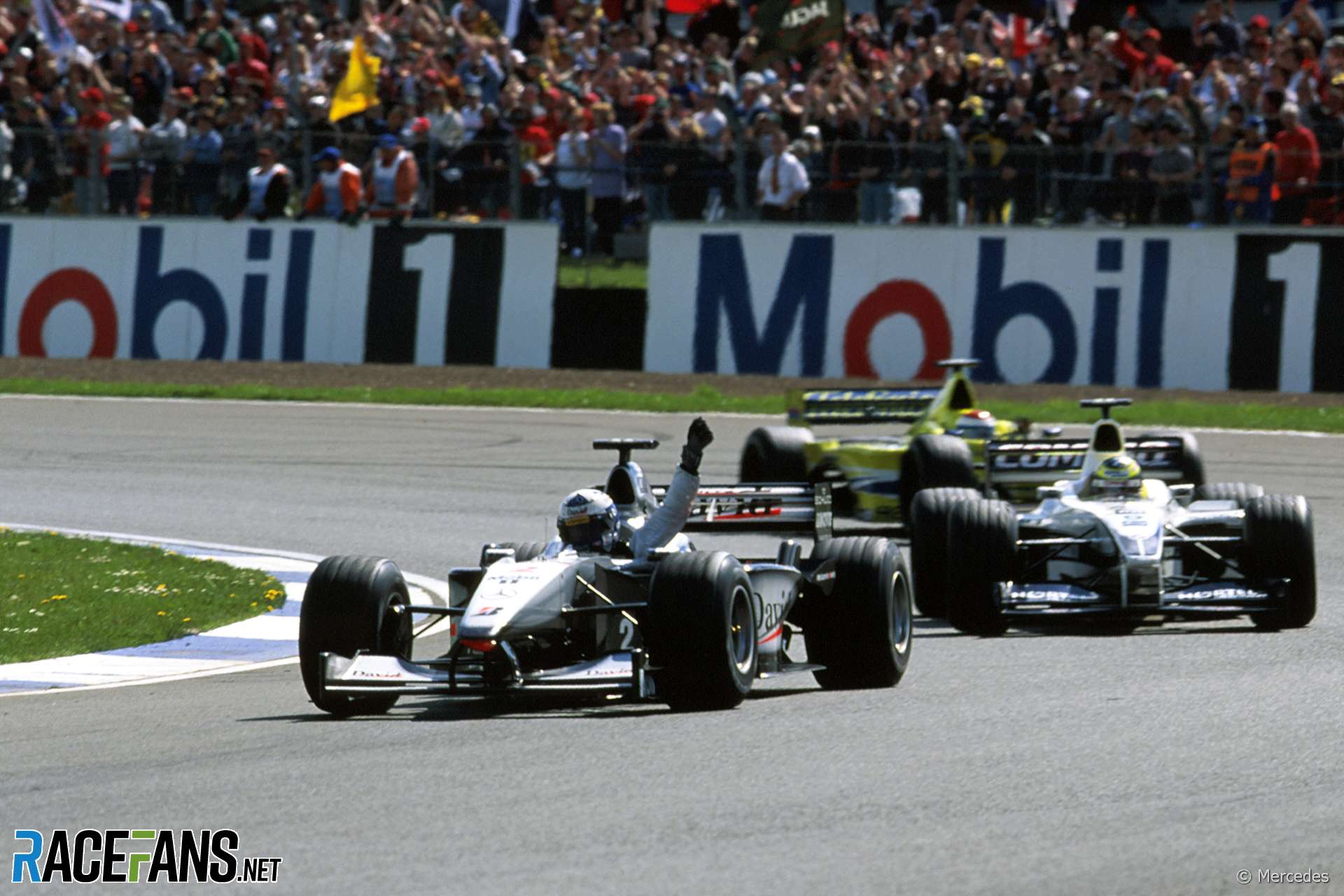 Silverstone veterans will tell you that the circuit comes with two weather settings. It’s either wet, cold and windy, or a suntrap from which racegoers emerge with a distinct beetroot hue. I once managed to return from the track with both a chill and fission-grade sunburn.

So when Bernie Ecclestone inexplicably scheduled the 2000 British Grand Prix for mid-April a wet, and changeable and very, very muddy weekend was guaranteed. Even now circuit staff preparing outer car parks come across fossilised Ford Mondeos with the tattered remains of Coulthard flags, a poignant reminder of the weekend Silverstone gave visitors to its annual F1 race the opportunity to experience conditions akin to the Great War trenches. Yet, astonishingly, the race went ahead on a dry track.

Arriving at Silverstone, Michael Schumacher had won the first three races of the season, building up a good lead at the top of the championship standings. Reigning champion Mika Hakkinen had just six points for one second place to his name, a state of affairs which was leading McLaren team principal Ron Dennis, who ordinarily make Mr Tumble seem downcast, to lose his usual ebullience.

Free practice was held in every weather condition bar snow. When Schumacher spun off during the damp Saturday morning session, suspicions were raised when the fuel filler flap on his F1-2000 popped open, then closed.

At the previous round FIA president Max Mosley had dropped a bombshell by revealing three unidentified teams had used banned traction control systems during the previous season. A rule change had been introduced preventing teams using pit-lane speed limiters for traction control. The limiter button also triggered the fuel filler flap on the Ferrari, technical director Ross Brawn confirmed, but he denied the team were using the system for traction control.

By the time qualifying came around conditions were chilly but drying. In an upset to the established order thus far in 2000, Hakkinen’s run of pole positions was ended not by Schumacher, but his team mate Rubens Barrichello. This was his career third pole position with as many different teams, having previously started from the front for Jordan and Stewart.

The top two teams found themselves locked out from the front row as Heinz-Harald Frentzen took second place, a mere three-thousandths of a second slower than Barrichello. Hakkinen and Coulthard suffered problems on their fastest laps and shared the second row.

Championship leader Schumacher was back at Silverstone for the first time since his leg-breaking crash the previous year, and paid a visit to the medical team who treated him. But he had to settle for fifth on the grid after mistiming his final lap by a tenth of a second. The distraught crowd responded by giving Schumacher a uplifting cheer as the news was announced.

Following his rough weekend at Imola, Jenson Button qualified an excellent sixth for his first home grand prix, bouncing back from a troubled free practice, and pipping the younger Schumacher by five hundredths of a second.

Race day dawned foggy. So foggy that the pre-race warm up session was delayed as the medical helicopter couldn’t land at the circuit. Attending celebrities and VIPs had to make their way into the track via shuttle bus and the drivers’ parade was cancelled. Sad times indeed.

By race time the weather had cleared Barrichello converted the advantage of pole position to lead into (Silverstone’s rightful first corner) Copse, ahead of Frentzen and the McLarens. Villeneuve made another flying start, leaping up to sixth, whilst to the crowd’s dismay Schumacher slipped down to eighth. His younger brother was among those who moved ahead, then took Villeneuve for sixth.

With most of the front runners making single pit stops for fuel and tyres, much of their work had to be done on the track, both in terms of passing and taking of clear air to over- and under-cut rivals.

Frentzen’s lap 24 pit stop crucially released Coulthard into clear air to hunt down the race-leading Ferrari. After closing up for several laps, the McLaren pilot made a bold move on Barrichello into Stowe on lap 30 – Coulthard after the event saying the pass was inspired by the similar move Nigel Mansell made on Nelson Piquet to claim the 1987 race – and immediately started to build up a lead.

Of the top runners Hakkinen was the first to pit on lap 31, followed a couple of laps later by Coulthard – both McLarens having no delay in the pits. For the Ferraris it was more dramatic, a hydraulic issue sending Barrichello into a spin on his in-lap, followed by retirement a lap later. Meanwhile Schumacher was flying on low fuel trying to make up for his slow start.

Once all the planned pit stops were complete Coulthard led the way from Hakkinen and Schumacher, with Frentzen in fourth (the highest of the two stoppers), from Ralf Schumacher and Button in the last of the points positions. Frentzen’s run didn’t last much longer with the Jordan stuck in gear, the German eventually forced into retirement after dropping down the order.

In the latter stages of the race the tension was between the leading duo, with Hakkinen steadily eating into Coulthard’s advantage, the race leader suffering gearbox glitches. However Coulthard had enough of a lead to take the chequered flag ahead of his teammate by 1.4 seconds. The Schumachers followed them, Michael ahead of Ralf and Button in the other Williams. Jarno Trulli claimed the final point for Jordan on a day when they might have hoped for much better at the track opposite their factory.

Coulthard therefore took up the running as the closest threat to Schumacher, the pair separated by 20 points with 130 still available. A largely trouble-free home race for McLaren had brought the title fight to life.

Having started its European season unusually in Britain, F1’s next stop would be the Spanish Grand Prix at the Circuit de Catalunya two weeks later. That was just about enough time for most of the Silverstone crowd to escape the car park quagmires and get back home.

I was lucky enough to watch this race in the Paddock and Paddock Club. At this time my dad worked for Arrows sponsor Orange, who arranged full access for the weekend. We were therefore fortune enough to be spared the grim experience many other fans endured trudging through the car parks – our only disappointment was the cancellation of our helicopter transfer on the Sunday morning (I’ll set up a JustGiving page for those who which to help compensate for the emotional trauma).

It was awesome. In these pre-selfie days I collected autographs and managed to meet the entire grid. Michael Schumacher made a particular impression: He was particularly polite and obliging, as were the overwhelming majority of drivers. Having spent much of the past decade in professional paddocks in a more formal capacity, I remember and slightly miss the rush of being in that environment as a truly geeky fan.

It has doubtless changed massively now, but back then, once in the paddock the drivers were quite accessible – they certainly weren’t surrounded by teams of PRs, trainers and garage feng shui consultants like today. The motorhomes by today’s standards were pretty understated, and the core business of the paddock was very much going motor racing.

I’m sure Paddock Club has evolved too, but it was pretty much everything you’d expect it to be – impeccable wining and dining, with mixed tables of business executives and the celebrities they’d invited to promote their brands and not a lot of conversational common ground.

No-one in Paddock Club was much interested in the race particularly and drifted away from the grandstand a few laps in, whilst I found it a bit of an odd environment to watch F1; to such an extent that we went to Castle Combe the next day afterwards to get our ‘proper racing’ at a clubbie.