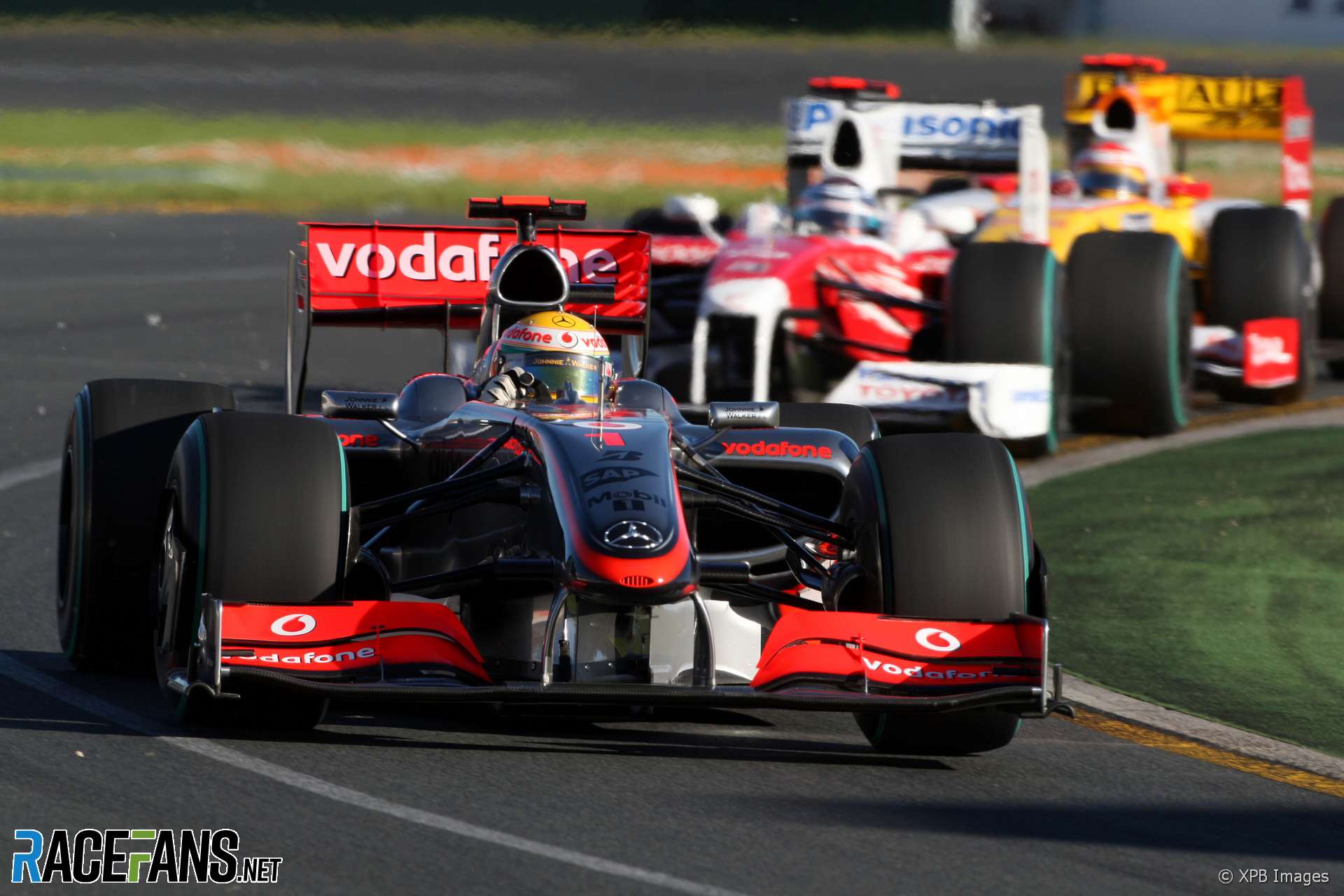 Mercedes technical director James Allison’s paen of praise for Lewis Hamilton last week cut to the heart of a divisive debate over the sport’s most successful drivers.

With six world championships and 84 race wins, Hamilton undoubtedly deserves to be rated among the most successful drivers the sport has ever seen. But has he achieved it, as Allison suggests, without as much as the merest blemish on his reputation?

“You won’t see just crude, dodgem car, bumper car stuff, or any sort of artifice to the way he drives,” said Allison.

“I hope that he manages to keep this going for the remainder of his driving career because it’s an utterly unblemished record. And I think amongst multiple world champions, it is also unprecedented to have to have all that success without anything that has even this sort of hint of a shadow of a poor sportsmanship hanging over it.”

This isn’t a claim that could reasonably be made of the driver who turfed his team mate off to win a title, or the latter when he returned the favour the following year, or the driver who attempted much the same on two other drivers during his career. But can it be made of Hamilton?

When Hamilton was asked last year whether he considers himself a cleaner competitor than other drivers he told the media: “Ultimately, it’s for you guys to reflect on how good that is.” To do that, we need to consider his entire 13-year, 250-race F1 career to date.

The astonishing aspect of Hamilton’s debut was how few incidents the rookie was involved in. Not only that, he brought his McLaren home on the podium in his first nine consecutive races.

That run ended at the Nurburgring, where Hamilton was lucky to reach the end of the race after being lifted from a gravel bed by a mobile crane. In a season of intense acrimony, Hamilton’s refusal to obey team orders to let Fernando Alonso overtake him during qualifying in Hungary was an act of insubordination, albeit a minor one. It provoked a considerably worse retaliation from his team mate, and its massive implications hurt both of them.

At Fuji, in heavy rain, Hamilton was leading the field behind the Safety Car when two drivers behind him collided. The stewards investigated the incident twice, and on re-examination softened the penalty issued to one of the drivers involved, Sebastian Vettel, but took no action against Hamilton.

Hamilton found himself on the wrong side of the law several times on his way to the 2008 title. Sometimes he was bang to rights, such as the qualifying incident in Malaysia, pit lane collision in Canada or scrappy outing in France.

On other occasions he had good cause to feel wronged, such as his harsh penalty in Japan, or the ludicrous decision to strip him of victory in Belgium.

During a Safety Car period at the season-opening race, Hamilton passed Jarno Trulli when the Toyota driver went off the track. This was legitimate, but his team believed they needed to return the place, so Hamilton was told to slow and wave Trulli through.

After the race, Hamilton and team manager Dave Ryan told the stewards he had not be instructed to let Trulli past. While Trulli was initially disqualified, once the truth came to light he was reinstated and Hamilton thrown out. Ryan lost his job over the incident, while Hamilton gave a fulsome apology to the media at the following race.

Hamilton committed surely his gravest error of judgement as a racing driver in the first race after he became a world champion. For the rest of the season – and thereafter – he hasn’t been involved in an incident of anything like this magnitude.

What has Hamilton done on-track which most angered his rivals? Overtaking the Safety Car during the European Grand Prix in 2010 would have to be a top candidate.

Hamilton was given a drive-through penalty for the incident, though due to the circumstances of the race it didn’t cost him a position. Ferrari were livid, calling it a “false race” and a “scandal”.

There were few other incidents of note that year, though he was shown the black-and-white flag in Malaysia, which didn’t reappear until last season when it was brandished at

Hamilton’s 2011 season was a ropey affair by his high standards, dogged by a series of needless collision with rivals, which along with other incidents added up to a total of nine penalties in 19 races.

He was involved in four incidents with Massa alone, and picked up three penalties in a single weekend in Monaco. That culminated in an ill-judged move, with more than a hint of ‘dodgem car’, on Pastor Maldonado, cast for once in the unfamiliar role of blameless victim.

The pair met again in Belgium when Hamilton dived past Maldonado at the end of qualifying, then was hit by the Williams driver after crossing the finishing line, suffering damage to his car. It was as if Maldonado had decided to teach him what a real ‘dodgem car’ move looked like…

Hamilton and Maldonado tangled again at Valencia the following year, but this time the Williams driver was entirely to blame, rejoining the track and thumping Hamilton out of the race.

He suffered more frustration in Spain when he was stripped of pole position for a technical infringement. His team had instructed him to stop on track due to a shortage of fuel in his car. The same thing happened in Canada two years earlier, where the team had been fined, but the rules had been toughened up in the interim.

Hamilton largely kept out of trouble during his first season at Mercedes only picked up a drive-through penalty for a tangle with future team mate Valtteri Bottas in the season finale at Interlagos.

Though Hamilton’s route to his second world championship was largely uncontroversial, the Hungaroring was the scene of another instance of Hamilton not complying with his team’s instructions.

He was told to let team mate Nico Rosberg by at one stage, but held his place and told the pit wall “I’m not slowing down for Nico”. However after the race team principal Toto Wolff said they were “ultimately comfortable” with Hamilton’s decision not to yield.

Aside from a tangle with Daniel Ricciardo at the Hungaroring, where he collected a drive-through penalty, Hamilton’s progress to a third world title saw few dramas.

In a tougher title fight with Rosberg, Hamilton picked up two reprimands for minor offences in the opening four races, and completed the season with the threat of a 10-place grid penalty for a further reprimand hanging over him.

The real drama came at the season finale where Hamilton, leading, could only win the title if Rosberg fell from second to fourth behind him. Over the protestations of his team, Hamilton slowed the pace to bring Rosberg’s rivals within range, but none were able to pass, and Rosberg clinched the crown.

Apart from being dinged for delaying Ricciardo on his way into the pits in Bahrain, it was a clean season for Hamilton. Sebastian Vettel accused his championship rival of brake-testing him in Azerbaijan, but the stewards put Hamilton in the clear, which Vettel later acknowledged.

The only infractions of note for Hamilton as he took his fifth title were a pair of reprimands for crossing the pit lane entry line. The first of these, in Germany, provoked some consternation as Hamilton stood to lose the race win had he been given a harsher penalty, though his reprimand was consistent with previous judgements.

Hamilton committed exactly the same infraction at the Hockenheimring 12 months later. This time he got a five-second time penalty as the rules had been tightened. He picked up two other penalties of note, one for impeding Kimi Raikkonen in qualifying, and another for an uncharacteristically ill-judged lunge on Alexander Albon at Interlagos.

Now in the latter stages of his career, Hamilton finds himself up in front of the stewards far less frequently than he did earlier in his career. This isn’t simply because the highly competitive equipment he’s enjoyed since 2014 has meant he hasn’t been involved in as much wheel-to-wheel racing – his growing experience and maturity were already evident in 2012 and 2013.

Nonetheless, occasional incidents are to be expected. Even the greatest drivers are going to make errors of judgement. Allison’s point wasn’t about these, it was about whether Hamilton has committed any genuinely dirty moves.

Surveying the whole of his career to date, I have to come down on Allison’s side. There’s obviously nothing which stands comparison with the four notorious title-deciding examples involving Alain Prost, Ayrton Senna and Michael Schumacher mentioned earlier.

These fellow multiple champions of Hamilton’s were also accused of other highly questionable moves such as brake-testing (Senna) or trying to stop a qualifying session by parking on the track (Schumacher). These were driving moves born of wrongful intentions. It’s this kind of behaviour Allison is referring to, and Hamilton clearly hasn’t done anything similar during his time in F1.

Melbourne 2009 was undoubtedly Hamilton’s most unsporting moment, though his key misjudgement was committed off-track, and he clearly received incorrect instruction from his team at the time. It should be counted against him, but not in a discussion about driving standards.

Beyond that, the worst you can say about Hamilton is he’s been unwilling to cede an advantage to his team mate on more than one occasion. Few other champions have.

Some criticise Hamilton’s tactics in the 2016 season finale. This strikes me as quite unreasonable, as he didn’t jeopardise his or his team mate’s ability to finish the race. Drivers regularly reduce their pace during races for different reasons, and doing because of the championship situation is no different.

If anything, Hamilton was perhaps too sporting on this occasion. Come the final lap, with nothing to lose, he could have pushed Rosberg even harder and risked a collision with his team mate, but he chose not to. It’s not hard to imagine how Hamilton could have made things much uglier.

Describing Hamilton’s record as “utterly unblemished” implies he’s never transgressed even in an innocent way. That clearly isn’t the case, as the many examples above illustrate.

But Allison’s broader point, that Hamilton has conducted himself with a level of integrity above that of other recent triple-champions, is a fair one.

The question now is whether that will hold through the final phase of his career, as he faces the new generation of spectacularly competitive talent lined up to take a shot at him.

60 comments on “Analysis: Is Hamilton’s driving as spotless as Allison claims?”