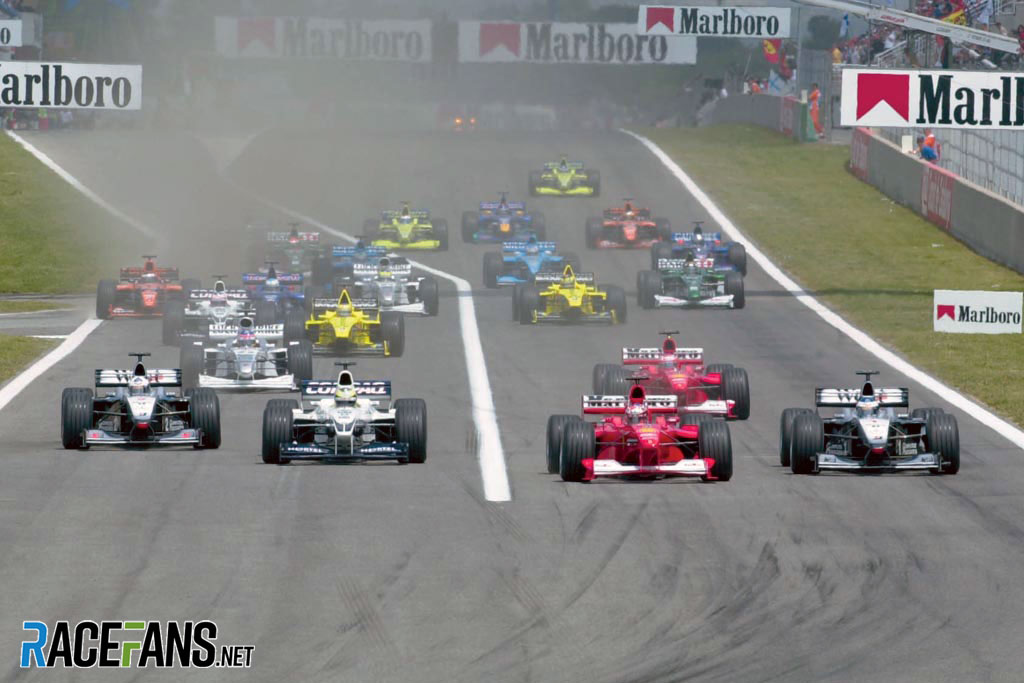 Four races into the 2000 season, the F1 title fight was beginning to come together nicely.

Michael Schumacher had racked up the wins in his Ferrari but the McLaren duo of Mika Hakkinen and David Coulthard seemed to have the edge of pace.

What we hadn’t had yet was a truly thrilling race. With a few exceptions – the damp 1991 running, Schumacher’s gearbox drama in 1994 and torrential rain in 1996 – the Circuit de Catalunya had seldom provided it. And as the teams had spent three days testing at the track the week before the race, prospects for the 10th Spanish Grand Prix at the circuit weren’t great.

There was tragic drama on the Tuesday before the race when David Coulthard was involved in air crash when his jet attempted an emergency landing into Lyon airport. Coulthard, his then-girlfriend Heidi Wichlinski and personal trainer/bodyguard Andy Matthews survived. Sadly the flight crew of pilot David Saunders and co-pilot Dan Worley died in the incident. Sid Watkins declared Coulthard fit to race, and with remarkable fortitude he participated in the weekend despite cracked ribs.

Jacques Villeneuve was also a doubt for the event, a lingering back injury from Brazil forcing him to skip pre-race testing. With the absence-enforced threat of Villeneuve’s musical side projects making a return the world’s finest medical minds combined to get the Canadian fit and on the grid.

At a track where overtaking is notoriously difficult, qualifying and strategy would be vital as ever. Schumacher topped the times during a windy one-hour qualifying session, pipping Hakkinen by just 0.078s. Their team mates lined up immediately behind, Barrichello just six-thousanths ahead of Coulthard. Both were four-tenths adrift of Schumacher, though Coulthard could attribute part of that to the extra 10 kilos of petrol he had to carry due to a fuel pick-up problem.

Ralf Schumacher underlined Williams’ progress with another strong qualifying result in fifth ahead of Jacques Villeneuve’s BAR, and the Jordans locked out row four.

Pedro de la Rosa hustled the Arrows into ninth at his home race and Eddie Irvine wrapped up the top ten. Once more it was a Saturday to forget for the Benettons and the Prosts – Wurz and Heidfeld only just escaping the clutches of the Minardis.

But there was disappointment for de la Rosa ahead of his home race. A scrutineering check uncovered a fuel irregularity in the Arrows, which Tom Walkinshaw insisted was caused by contamination during transit, and the Arrows was relegated to the back of the grid.

The race got underway in warm, dry, conditions. Hakkinen made the better start from the front row, but a characteristically aggressive move by Schumacher kept the McLaren behind. Hakkinen then got roughed up by the other Schumacher, Ralf’s Williams tipping him wide at turn one, though both continued without losing ground.

Coulthard slipped to fifth, while early incidents account for a trio of drivers. Pedro Diniz pirouetted off into retirement, while Alesi and de la Rosa collided on lap two.

Schumacher sustained his advantage through the early stages of the race and the first pit stops. But his first visit to the pits was not without drama. Mechanic Federico Uguzzoni raised his lollipop before Nigel Stepney had pulled the refuelling equipment clear, and Stepney was sent flying, suffering a broken ankle.

Back on track, Schumacher found himself pursued by Hakkinen, his charge reinvigorated by fresh rubber, having chosen a softer compound of Bridgestones than his rival. Likewise in the fight for third Coulthard was closing onto the tail of the younger Schumacher.

The second round of stops decided the race. An uncharacteristically shambolic stop from Ferrari left Schumacher static for an additional 10 seconds, allowing Hakkinen to take over the lead. A slow puncture trouble further compounded Schumacher’s woes, putting Coulthard on his tail. Schumacher was once again robust in defence, but Coulthard eventually took him around the outside into turn one.

The Schumacher brothers then engaged in battle, tangling themselves up and allowing Barrichello through for third position. Schumacher brought his Ferrari in for more new tyres, and having passed Jenson Button tried to catch up to his brother, to no avail. Button then retired with a blown engine, promoting Heinz-Harald Frentzen to the final position.

That left Hakkinen to lead Coulthard home in a one-two which further reinvigorated the team following his team mate’s victory at Silverstone two weeks earlier. Barrichello rounded out the podium in his Ferrari, from brothers Schumacher (Ralf ahead of Michael) and Frentzen in sixth.

Post-race, the fraternal battle between the Schumachers was the main talking point. The race stewards decided to leave judicial matters to their parents. Thus Michael had to do the dishes that evening, and Ralf lost a week’s pocket money.

A second win on the bounce for McLaren and a poor finish for Schumacher meant a title fight which looked one-sided after the first three races was now a much more interesting proposition. Though it remained unclear which of the two McLaren drivers would emerge as Schumacher’s strongest threat. Hakkinen trailed him by 14 points with Coulthard a further two points back.