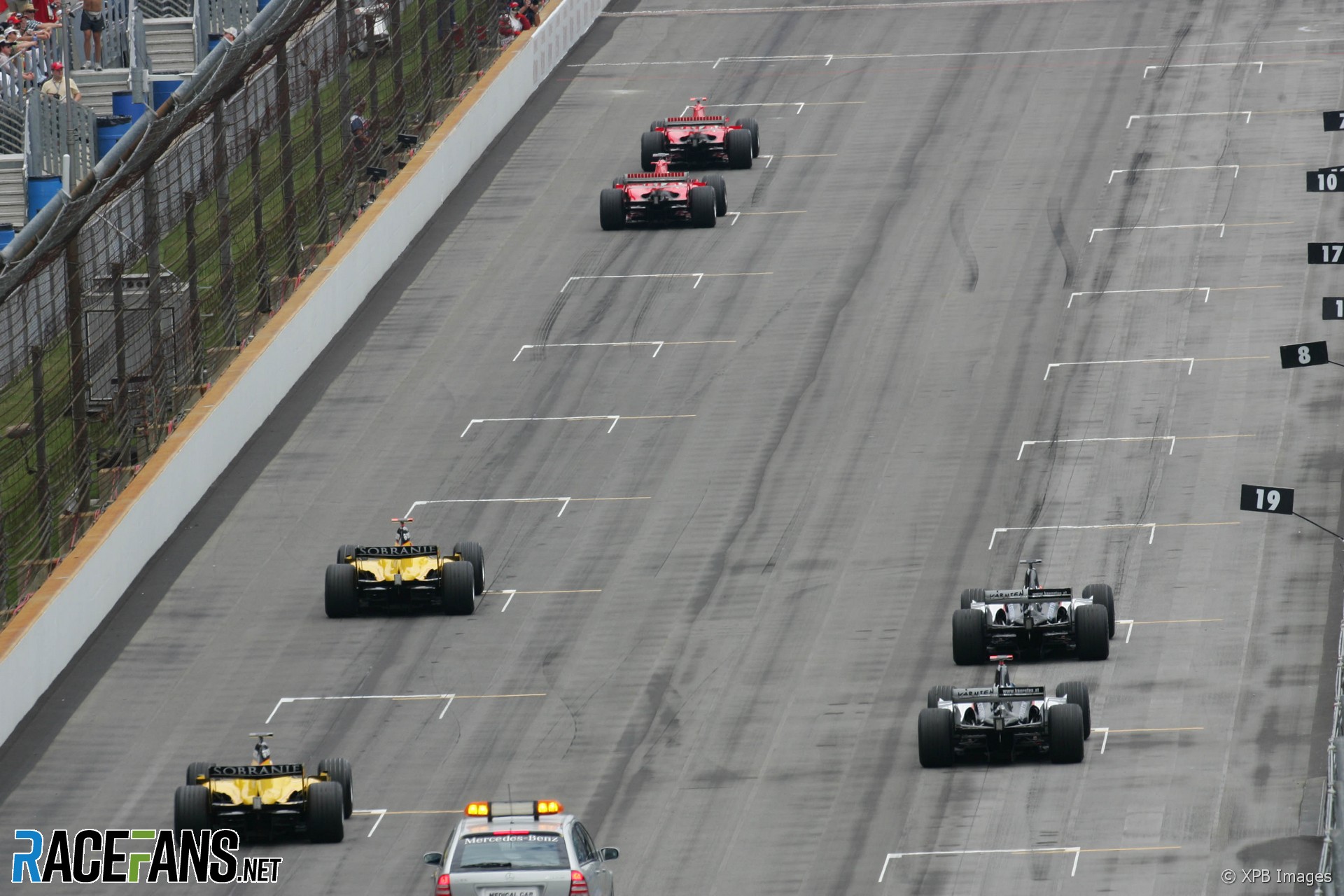 Exactly 15 years on, I recall the scene clearly. Ron Dennis, then McLaren’s head honcho, heading stone-faced down the US Grand Prix grid, stopping one by one beside selected peers – six in total – as he twirled an upward-pointed index finger in a single circle before mock-slicing his throat with said digit. Significantly, Dennis did not acknowledge Jean Todt, then Ferrari’s team boss, tending his top car, placed fifth on the grid.

Each of Ron’s respondents nodded silently in return, faces set grimly as their eyes locked with Ron’s, the gesture clearly having been pre-arranged, and the unsaid implication crystal clear to each of the team bosses. Tellingly, they all sported a Michelin logo on their team gear.

As my gaze followed him down the grid it dawned on me that this sign language spelt disaster for F1; that the single finger meant ‘one’; the circling mimed a lap, with the throat ‘cut’ being F1-speak for ‘kill engine’. My worst fears for the 2005 US Grand Prix were about to be realised: the seven Michelin-shod teams would circulate for the formation lap, then peel into pit lane without taking the start proper.

Thus, only six cars would actually take the race start: The Ferraris, fifth and seventh on the grid, plus the Jordans and Minardis, occupying the final two rows. Significantly, all Bridgestone-shod.

A power struggle between teams and authorities had reached peak damage, and F1 was about to self-immolate in the hybrid-oval cauldron at the self-styled ‘Racing Capital of the World’ to the shocking detriment of hundreds of sponsors, hundreds of thousands of spectators packed into stands and hundreds of millions of fans, the largest slice tuning in at European prime time. F1 was on a public suicide mission.

The weekend started like any other – Thursday preliminaries, Friday practice, and Toyota tester Riccardo Zonta stopped with a deflated tyre; otherwise all normal. FP2 saw the left rear Michelin on Ralf Schumacher’s explode, causing his Toyota to thud backwards into the wall.

These things happen, we though. The session was red-flagged, he’s whisked to hospital for checks, lappery resumes with Michelin-shod Juan Pablo Montoya eventually topping the time sheets in his McLaren.

Then the FIA press conference. Michael Schumacher, who had just seen his younger brother suffer his second heavy crash at ‘turn 13’ in as many years, remarked on Bridgestone’s tyre selection for the weekend. “We have left at home tyres with better performance but less durability because we knew what kind of stress the tyres would be under here, so I don’t know what was [Michelin’s] problem but this was not our problem.”

Cryptically he added, “I hope everyone understands there was nothing from our side to do in that respect.”

His comments later slot neatly into place when it emerges the track had been resurfaced then diamond cut ahead of the previous month’s Indianapolis 500, delivering better lateral grip and causing IndyCar sole supplier Firestone to revise its specifications. A Bridgestone source later admits its sister brand provided technical guidance to its F1 associates. Of course, nobody thought to tell Michelin…

Whatever, the first inkling that something was seriously amiss came on Saturday morning. No Michelin cars ran more than a few consecutive laps before pitting, whereupon engineers descended on their rear tyres. A BAR engineer told me: “We can’t do more than 10 laps with these tyres, the sidewalls collapse due to lateral forces.”

The solution seemed so blindingly obvious: Install a chicane before cars enter the fast oval banking sector to reduce loads. Much as had been done at the Spanish Grand Prix 11 years earlier.

This time politics came into play: a late change would require team unanimity and Ferrari refused. The FIA, then presided over by Max Mosley, refused to play ball, allegedly for insurance reasons – although Safety Delegate Charlie Whiting was present and could have approved modifications.

The (utterly) ridiculous solution proposed by the FIA was to force Michelin-shod cars to pass slowly through the pit lane every lap while their rivals sped by normally. Equally idiotic were suggestions that Michelin cars be speed restricted on the banking while the other six sped past them on at arguably the most dangerous point of the lap.

Proposals for a non-championship race on a modified circuit were rejected by the FIA. Michelin flew a different specification in from France overnight, but these showed the same structural problems when tested upon arrival so that was a no-no.

Pit stops weren’t an option, either: A major regulation change for 2005 was that drivers were forced to use one set of tyres for qualifying and the race. Thus a perfect storm was brewing in a major market the sport was in the process of wooing by racing at the iconic speedway. Effectively every possible suggestion was met with reasons why this or that solution was impossible.

Asked by RaceFans this week whether he recalled the race, then-F1 boss Bernie Ecclestone said with a half-chuckle, “Oh yes, of course I do – I wanted to run the race somehow, but Max [Mosley] said ‘No’.”

Whatever, power-play was par for the course F1 2005-style. We’d already had Minardi threaten to sue the FIA in Melbourne’s High Court and BAR banned for two races over fuel tank irregularities. Meanwhile, eight races into the season, the previously all-conquering Ferrari team were yet to win a race. This weekend would prove their sole 2005 victory in the hollowest of circumstances.

All 20 cars took the formation lap – ironically led by Jarno Trulli’s Toyota – but as I feared the 14 Michelin drivers all followed their teams’ instructions. As we cleared the grid ahead of that lap and headed for the media centre I hoped fervently that by some miracle the Michelin drivers would ignore their bosses – but under the circumstances that would have been sheer folly, and they all knew it.

The Indianapolis press room is situated overlooking the start/finish line, above and behind a main stand. Hence we could see clearly the shocked looks on fans’ faces as the sextet lined up, unevenly scattered in their original grid positions. 100,000-plus punters who had paid good money to see this unfolding debacle made their fury known by lambasting F1 on all available news feeds. ‘Fiasco’ was too tame a word for it.

Of course there were recriminations: Mosley and co. summoned the Michelin teams to a World Motorsport Council to explain their conduct, having charged them with five offences as per the analysis of an FIA press release, written at the time by my good friend and colleague Forrest Bond for RaceFax. It superbly portrays the politics at play while nailing the cack-handed manner in which all stakeholders – bar one – acted.

That individual is Paul Stoddard, who stood to gain the most given that his Minardi team had no chance of scoring points in a normal race but stood to finish at least fifth and sixth were the race to run with a depleted field. Yet the wily Australian pushed for solutions, and was later dubbed ‘an eccentric gentleman’ by Mosley – which in retrospect seems a bit rich. His analysis of events can be read here.

Michelin agreed to refund ticket holders via the promoter, and made 20,000 tickets available to fans for the next year. However the manufacturer left F1 at end of that season, despite having shod 2005-06 world champion Fernando Alonso’s Renault. Similarly, there was little wonder that the Indianapolis Speedway Corporation did not renew its F1 contract when it expired in 2007, and is only now mulling a return over a decade later.

The seven teams? Their suspended sentences were annulled by the FIA after they appealed, successfully arguing that to have raced on with cars in a dangerous condition would have left them open to federal charges in America, particularly if an accident with serious consequences had occurred. In retrospect one can only wonder what the FIA thought by pressing charges, particularly given that Mosley qualified as a barrister.

One knows how his success Jean Todt reacted at the time, putting Ferrari ahead of the good of F1. That, of course, was his job at the time, and its reward was a (hollow) one-two victory, the team’s only win of the season. One wonders how he would react under similar circumstances as FIA president. I’d like to believe he would have pushed for a pragmatic solution – as he has under Covid-19 – rather than stick rigidly to protocols and regulations.

Although certain F1 factions would rather the entire shameful episode were forgotten, 15 years on it serves as a reminder of the dangers of inflexibility, of entrenched thinking and of putting selfish interests well ahead of the overall welfare of F1 and by extension its fan base.

At a critical time when all stakeholders should have pulled in one direction and found a solution to unfortunate set of circumstances, every solution was opposed on principle. Ultimately they got their just desserts – a farcical event for which the players should hang their collective heads in utter shame for publicly forcing F1 into disrepute in the world’s most influential market, one F1 has still not cracked 15 years on.