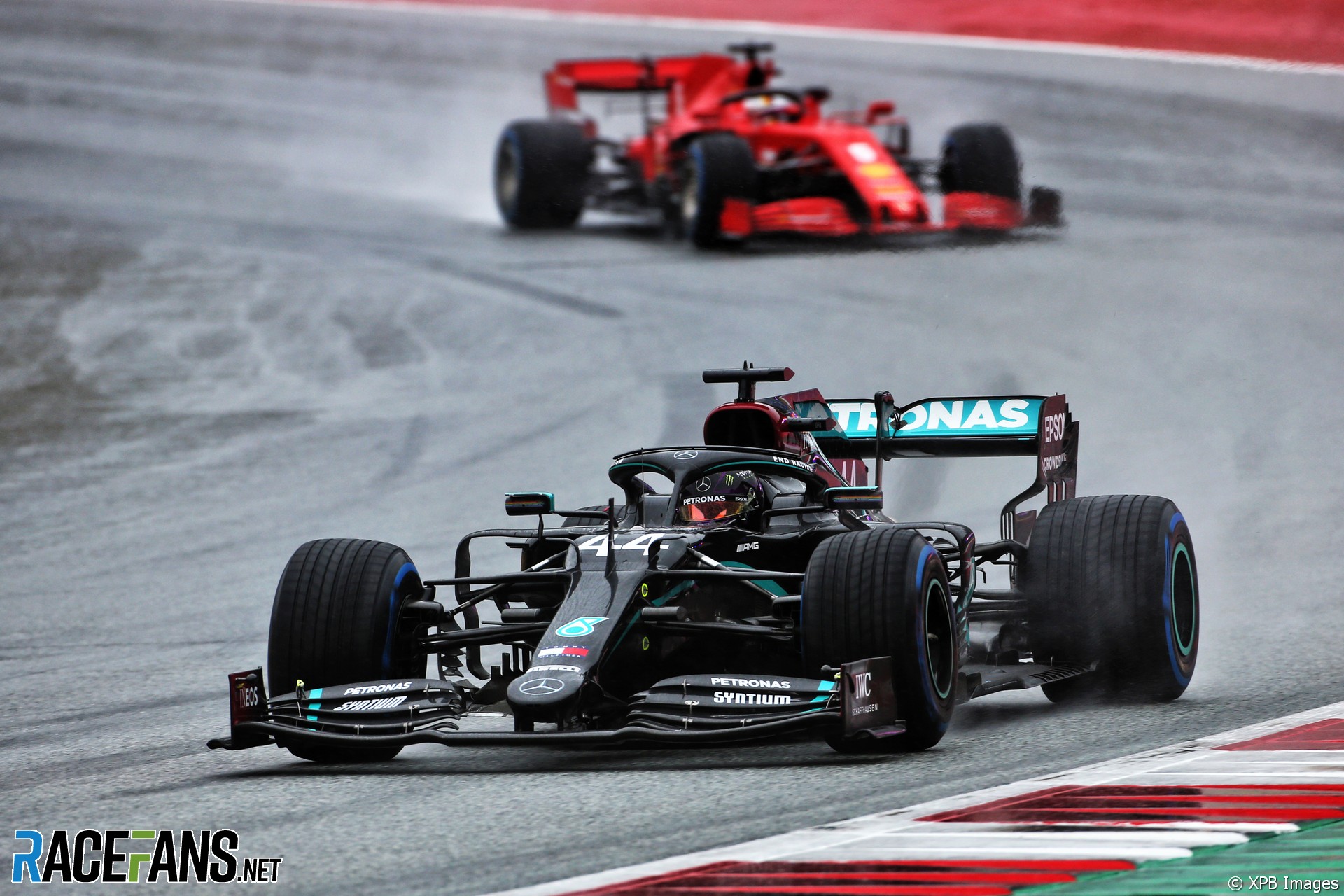 An exceptional performance by Lewis Hamilton at a rain-lashed Red Bull Ring saw the Mercedes driver take pole position by 1.2 seconds ahead of Max Verstappen.

Carlos Sainz Jnr made it three different cars in the top three. He’ll share the second row of the grid with last week’s winner Valtteri Bottas.

The prolonged period of heavy rain which arrived at the Red Bull Ring on Saturday had already forced the cancellation of final practice when the qualifying hour rolled around. Teasing, the rain relented for a while as 3pm approached, only to return with a vengeance. Clearly, qualifying could not begin at its allotted time, as was duly postponed.

It finally began after a 46-minute delay on a track which was soaked but nonetheless passable. It was full wet weather tyres all round for the field as they assembled at the pit lane exit, led by Sebastian Vettel, some queuing for more than two minutes, anxious not to miss what could be the best of the conditions.

In the event almost all of Q1 ran to schedule without interruption. Lap times steady fell throughout, but a largely flawless show of driving by the field kept cars out of barriers.

Romain Grosjean, the last driver onto the track, was the first one off it, skidding into the turn four gravel on his out-lap. He rejoined but only drove as far as the pits, where he stopped with a suspected water pump problem, and took no further part in the session.

Most drivers opted to take second, fresh sets of wet weather tyres as the session wore on, to benefit from the superior grip of unworn tread. Seven drivers resisted the temptation including both Mercedes and both McLarens. The Red Bull pair did too, though Alexander Albon was only 14th, and Daniel Ricciardo did the same. Both Ferrari drivers made it through, but

George Russell took advantage of the adverse conditions to secure Williams’ first appearance in Q2 for more than a year. But Antonio Giovinazzi brought the session to an early end, crashing his Alfa Romeo at the end of the lap. After being told to rejoin he dragged debris onto the track, then came to a stop as the session was red-flagged.

Kimi Raikkonen joined his team mate in elimination, while Nicholas Latifi was over a second off his flying team mate and also went out. Sergio Perez also dropped out along with Grosjean.

Hamilton and Verstappen swapped quickest times throughout the second part of qualifying, ending up separated by a tenth of a second. They were half a second clear of the chasing pack, which was led by Lando Norris, the McLaren driver in good shape having had therapy for the pain he suffered yesterday.

A week earlier only one of the Ferrari drivers made the cut for Q3. The same happened again, but this time it was Charles Leclerc who progressed no further than Q2. Sebastian Vettel had a messy moment on the kerbs at the exit of turn one, but gathered it up and claimed the final place in the top 10 by a tenth of a second from his team mate.

The two Ferraris were followed, impressively, by Russell’s Williams in 12th place. Daniil Kvyat, who was involved in an incident with Leclerc, joined the Ferrari driver in progressing no further. The second Racing Point and Haas, of Lance Stroll and Kevin Magnussen respectively, were also eliminated.

The conditions had visibly worsened further as the final 10 drivers took to the track for the pole position shoot-out. Verstappen set the pace initially, but Hamilton unleashed the potential of the Mercedes with his final two runs.

The first lifted the black W11 seven-tenths of a second clear of the field. His final effort added another half a second to that margin.

Red Bull told Verstappen “we’ll give you all the performance for this final lap”, and he began his decisive effort with the fastest time of anyone through sector one. But Hamilton, running behind him, soon pegged that back. Verstappen remained on course for a substantial improvement in his time, but as he reached turn nine he found a pit-bound Vettel at the apex.

The Red Bull snapped sideways, and though Verstappen’s awesome reflexes kept it out of the wall, his chance to improve was gone. Nonetheless he secured the second spot on the front row.

Pierre Gasly briefly had the AlphaTauri up in third place, but slipped back over the final runs. Sainz took advantage, placing his McLaren in a superb third, cheering “ole, ole, ole” as the team confirmed the result. Esteban Ocon, who had a disappointing qualifying session one week earlier, put his Renault an excellent fifth, Bottas separating him from Sainz.

Having been third in Q2, Norris was a disappointed sixth, which will become ninth after his grid penalty. That will promote Albon, Gasly and Daniel Ricciardo. Vettel qualified 10th.