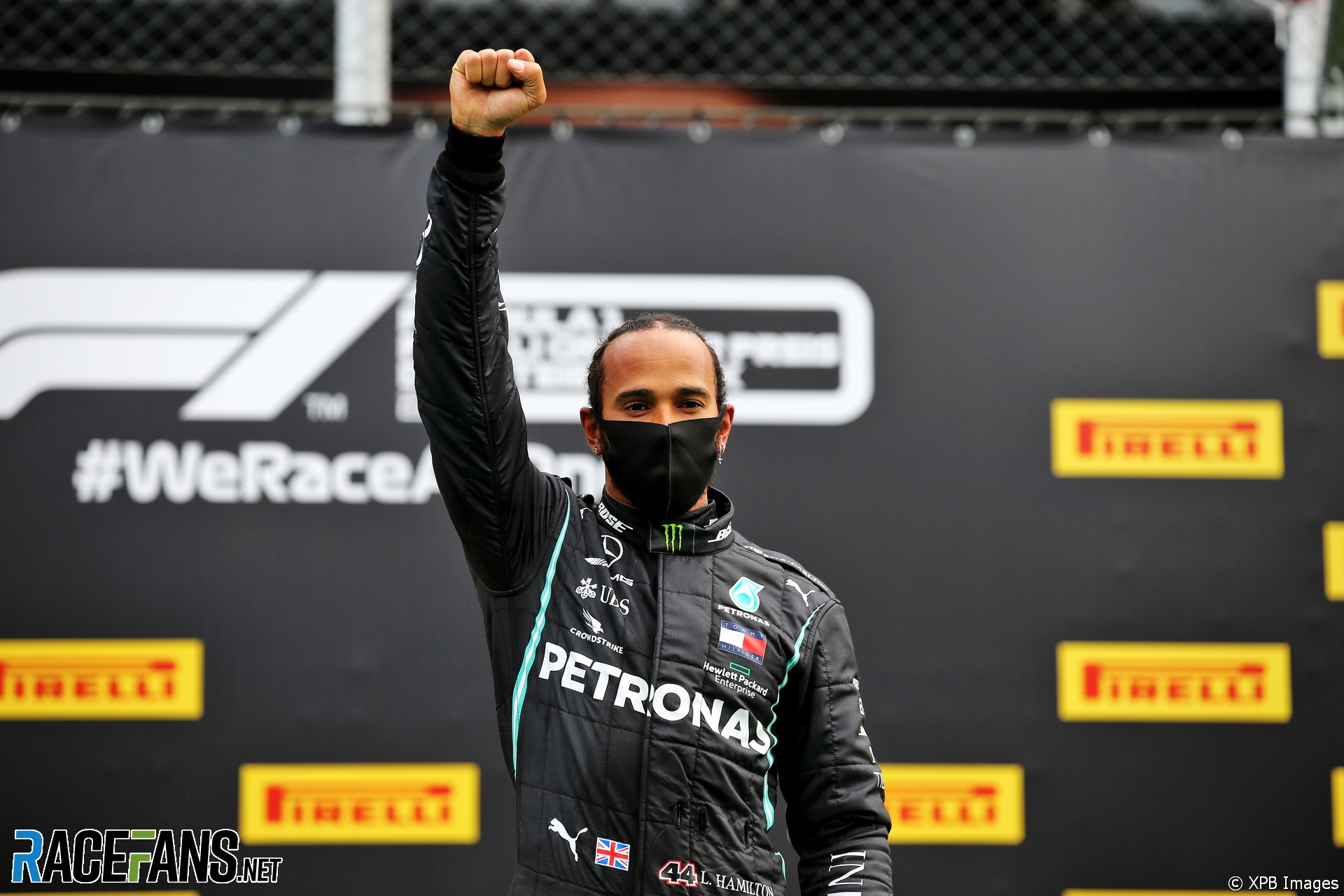 Having stumbled twice in the season-opener at the Red Bull Ring last week, Lewis Hamilton made no such mistakes in Formula 1’s unprecedented return to the second venue for two races in a row.

He took his first victory of the season comfortably ahead of team mate Valtteri Bottas, the distant Red Bulls, and everyone else at least a minute behind. Following the long delay to the start of the 2020 season, the reigning champion’s pursuit of a record-equalling seventh title is on.

The Austrian Grand Prix, Formula 1’s first pandemic-era race, had gone remarkably well. To increase the chance of a smooth start to the season, the championship organisers had decided to stay at the Red Bull Ring for a second race.

The name ‘Styrian Grand Prix’ was settled on. Curiously-named races are going to be a feature of this heavily disrupted championship – we already have the ’70th Anniversary Grand Prix’ (a.k.a. British Grand Prix II) to look forward to, and the Tuscan Grand Prix Ferrari 1000. That may be a clumsy moniker, but forgive them, for it means we will get to see F1 cars screaming around the superb Mugello course.

Ahead of another 71 tours of Red Bull’s home track, Hamilton dominated qualifying, leading the field by well over a second on a drenched track. For the second weekend in a row, however, Max Verstappen had planted his Red Bull on the front row.

The rain-hit session meant F1’s usual rule that the top 10 had to start on old tyres didn’t apply. Everyone got a free choice, as they should do at every race. However with the track washed clean by Saturday’s deluge, and several of the quicker cars ‘out of position’, soft tyres remained a logical choice for most.

Hamilton put the outcome of the race beyond doubt quickly. Following an early Safety Car period (more on that later), he scampered out of DRS range from Verstappen, and steadily increased his lead to 3.7 seconds by lap 18. Then he increased his pace, putting up to seven tenths a lap on Verstappen, whose car was tending to oversteer and increasingly had to worry about the other Mercedes behind him.

“The Mercedes drivers have been instructed to push,” Verstappen was told. “What do you want me to do?” he asked. “As you are. I know you’re pushing.”

By lap 23, with Hamilton now 5.6 seconds up the road and Bottas two seconds behind, Red Bull pulled Verstappen in. Tellingly, Mercedes didn’t bother summoning Hamilton the next time around, but were secure in his margin over Verstappen to wait three laps before responding, and still had him back on track the best part of five seconds ahead of the Red Bull.

Verstappen’s pit stop was a reaction to Bottas, not Hamilton, who was long gone. Now Mercedes could afford to leave Bottas out front, reduce the length of his second stint, and give him the chance to attack Verstappen at the end.

Sure enough, by lap 58 Verstappen’s lap times had risen into the 1’08s and never got back down. Bottas teed him up in the DRS zone heading to turn four but Verstappen responded with a gem of a re-pass on the outside of the corner, cautiously staying wide, minimise the chance of a Hamilton/Albon-style tangle.

In a just world, second place would have been Verstappen’s reward for such a move. Instead we have DRS. As the next lap began, Bottas was fractionally closer to Verstappen, the pass was a mathematical inevitability, and when it happened it was every bit as exciting as that sounds.

(The powers-that-be originally hoped to add variety to this second race at the same track through the gimmick of a reverse-grid qualifying race, a proposal panned by drivers. Happily, because this needed to be approved by the teams, wiser minds prevailed. If only they’d instead taken advantage of the opportunity to experiment with a DRS-free race by simply not designating any zones for it, a change would not have needed the teams’ approval.)

Hamilton, therefore, took a straightforward but no less impressive victory. The Red Bull Ring is something of a bogey track for him, which is to say this was ‘only’ his second win on the circuit. Throughout his run to the flag he was requesting feedback on whether he was losing time, working away on his driving. He had a near-15-second lead over his team mate, last week’s winner, when he began stroking the Mercedes home.

The race came alive in the midfield where Sergio Perez, after struggling in the wet qualifying, was carving his way to the front in a blur of pink. He dispensed with his team mate with little difficulty, and no obvious sign of interference by the team, and then began an incursion deeper in to the top 10.

While Perez relieved Daniel Ricciardo of fifth place with little difficulty, Lance Stroll found it harder going in the second RP20. “I just can’t get by, Brad,” said Stroll, finding less bite from tyres that were five laps older than his team mate’s.

Further back Lando Norris was waved through into eighth place by McLaren when he caught team mate Carlos Sainz Jnr. “Don’t fight him, he’ll get out of your way,” said the pit wall. “He’ll let you past into turn four.”

Perez was flying: For six laps in a row he set the fastest lap time of anyone on the track. He was taking up to a second per lap out of fourth-placed Alexander Albon. With two laps remaining he got down the inside of the Red Bull at turn three, and the pair touched. It looked like a replay of Albon’s tangle with Hamilton a week earlier, but this time the Red Bull emerged unscathed, while Perez’s front wing mountings fractured.

Perez lost three seconds that lap and six the next time around. Norris was alerted to the unfolding opportunity ahead. On the penultimate lap, Stroll made a do-or-die bid to take Ricciardo, throwing it down the inside of turn three. Stroll went off the track completely, taking Ricciardo with him.

As they rejoined, Norris arrived on the scene, slipstreaming past Ricciardo on the straight and coming close to getting Stroll on the outside of turn six. DRS got the job done the next time around.

Meanwhile Perez, who’d started the last lap eight seconds ahead of them, was coming into view. His front wing had now folded backwards, yet remarkably hadn’t detached and gone underneath the car, which might have caused a substantial crash. However in the quick corners at the end of the lap he was woefully slow.

Norris pounced on him for fifth place between turns nine and 10, where passes are rarely made. Luckily for Perez the finishing line is close enough to the exit of the final corner at the Red Bull Ring that he pipped Stroll and Ricciardo to it by two tenths of a second.

The drama didn’t stop there, as Renault lodged an official protest against both Racing Point cars for a technical infringement after the race. Would they have bothered had Ricciardo found the extra 0.204s he needed to finish ahead of Perez and Stroll?

Carlos Sainz Jnr and Daniil Kvyat completed the points scorers, the former’s race spoiled by a slow pit stop, though he took the bonus point for fastest lap by fitting a fresh set of tyres at the end of the race. Verstappen tried the same, but lost time in traffic, capping a disappointing day, though at least he scored his first points.

Romain Grosjean let Kevin Magnussen past when ordered to, then the pair demoted Antonio Giovinazzi, who had likewise been instructed to let Kimi Raikkonen by. Pierre Gasly fell from seventh on the grid to a disappointed 15th at the chequered flag, a switch to hard tyres having backfired badly. George Russell, who fell from 11th to 16th, was similarly disappointed with his day, spoiled by an off-track excursion following the Safety Car period.

The Safety Car had been needed because on the first lap of the race Ferrari’s season went from dreadful to worse. Charles Leclerc, the hero of the season-opener with his excellent drive to second, went to zero less than half a minute after round two started. Venturing an optimistic move on his team mate at turn three on the first lap, the back end of his car snapped sideways, and he wiped both of them out.

Surely things can only improve for Ferrari from here.

Hamilton seeks more than a title

For years it was taken as read that the only way to achieve consistent success in Formula 1 was with a single-mindedness that excluded all else. Drivers who won multiple titles did so not merely because they were talented and worked hard, but because they shut out anything that might distract them from their goal.

Hamilton has proved that wrong before. He is already a six-times champion despite filling his non-race weekends with any number of other interests in recent years, such as his fashion line or musical aspirations.

As the 35-year-old six-times champion progresses into the autumn of his career, his concern for the wider world has made him increasingly outspoken. His interests in environmentalism and veganism have prompted him to launch a meat-free restaurant chain and declare he will go carbon neutral.

But even these have been outstripped by the passion with which he has brought to the fight against racism and the drive to promote diversity. Who else on the grid would or could have the power to convince his team to re-paint their cars black as a gesture of their commitment to ending racism?

“I think ultimately Formula 1, yes they’ve taken a step forward, but there’s absolutely more they can do,” he said in the aftermath of his 85th career win yesterday. “Formula 1 has come forward and said that they are supporting ‘end racism’ and it’s amazing to see Mercedes doing the same thing. But no other team has said a single thing.”

More than any other driver, Hamilton has been at the forefront of pushing, urging and demanding Formula 1 and its teams do more to promote diversity.

Can a driver do all these things and still win a world championship? On Sunday, Hamilton took the first step towards proving that yes, you can.