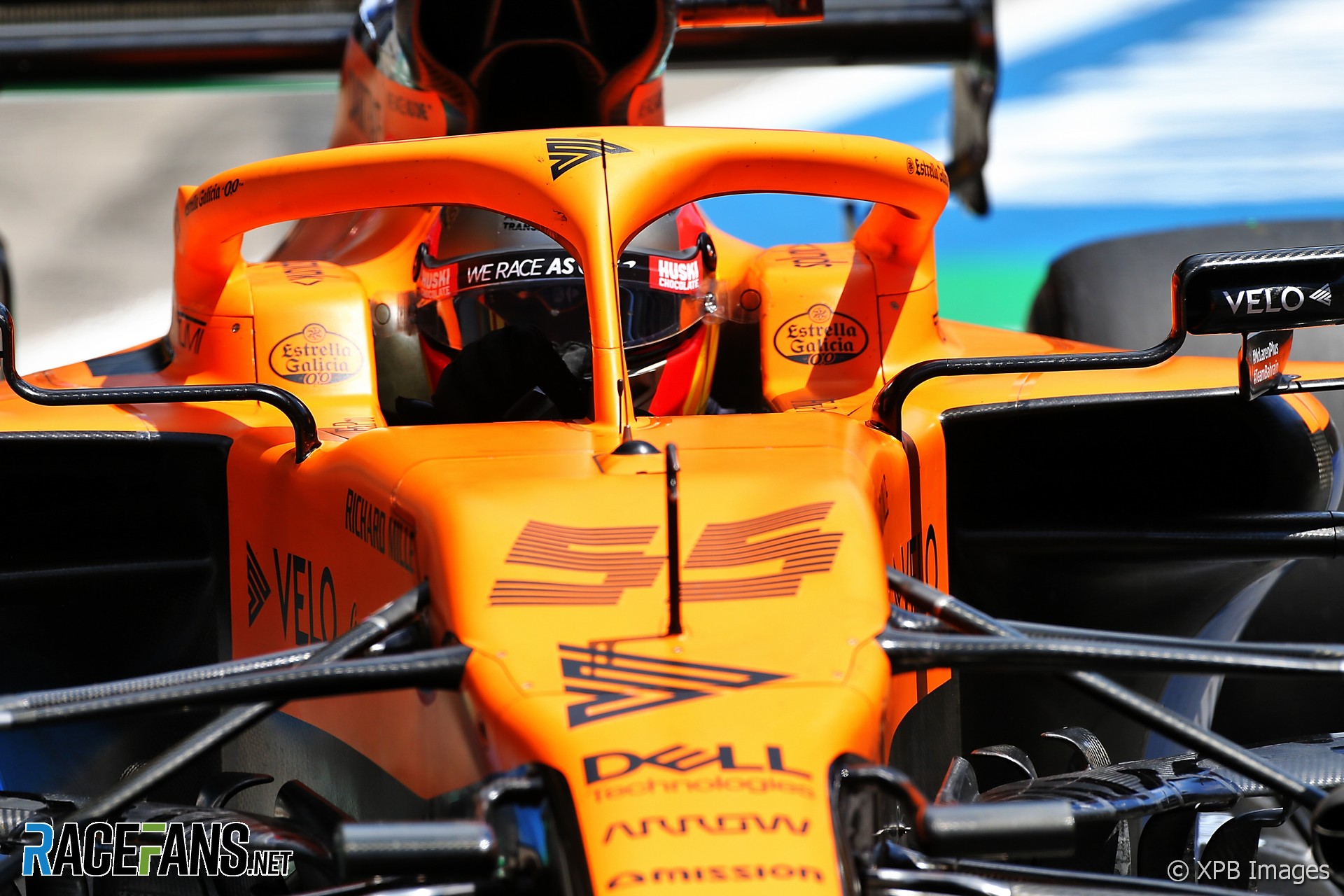 Sainz took advantage of a streaming wet qualifying session, put in the third-best time and claimed the highest starting position of his F1 career. From there he challenged Verstappen for second but sensibly kept out of trouble as Valtteri Bottas and Alexander Albon came past in significantly quicker cars.

The number 55 McLaren was running comfortably in fifth until a slow pit stop dropped him down to 13th. He recovered to eighth, then let by his quicker team mate when asked. He undoubtedly deserved better than ninth. To his two points he added a third by setting the fastest lap of the race after making an extra pit stop. Running in clear air, he was able to set a quicker time than Max Verstappen, who encountered traffic when he tried to do the same.

After a sub-par performance in F1’s first race at the Red Bull Ring, it looked like the Styrian Grand Prix would be a similar case for Hamilton. He was sixth in second practice and at risk of starting from the third row if the forecast rain led qualifying to be abandoned.

Fortunately for Hamilton, the rain eased long enough for qualifying to take place, and his astonishing touch for the very worst conditions did the rest. The track surface changed every lap as the rainfall varied. In Q3 the conditions were at the worst they had been all session, but turned this to his advantage, destroying the field by 1.2 seconds.

The race was less dramatic for the six-time world champion as he controlled proceedings from the start and quickly opened up a healthy lead over Verstappen. Unlike the first race, the team appeared to have no repeat of their reliability worries, and Hamilton won his first race of the season in dominant fashion.

Could Leclerc have possibly had two more different races at the Red Bull Ring? He dazzled first time out, salvaging a second place which was far beyond what the Ferrari deserves. Last weekend was arguably his worst performance in an F1 car.

After dropping out of the wet qualifying session in Q2, seemingly running less wing than his team mate, Leclerc became the subject of two FIA investigations. He was rightly cleared over his reaction to the red flag, but equally the stewards had him bang to rights for failing to let Daniil Kvyat through, which meant a three-place grid penalty.

His race went even worse as he attempted a late lunge down the inside of his team mate into turn three. Leclerc clambered over the inside kerb, skidded into the other Ferrari and demolished Vettel’s rear wing. Both drivers were forced to retire from the race due to the damage; Leclerc at least was wise enough to accept full responsibility for the incident after the race.

Bottas struggled with glazed brakes in qualifying and started fourth, but recovered in the race. He quickly disposed of Sainz and passed Verstappen in the closing laps to complete a one-two for Mercedes and retain his points lead.

After that, Verstappen pitted for soft tyres in an attempt to set the fastest lap of the race, but mired in traffic and nursing a damaged wing, Sainz beat him to it. He still crossed the line third behind the Mercedes. Alexander Albon dropped back early on with blistering but survived a late attack from Sergio Perez’s very quick Racing Point, which made contact with him.

That damage cost Perez fifth place on the last lap, following his otherwise impressive climb from 17th on the grid, the result of being unable to get his tyres to the correct temperature in qualifying.

Lando Norris’s weekend started poorly when he overtook under yellow flags during practice one and was given a three-place grid penalty. Starting ninth he was overtaken by Perez and Stroll early on but did the longest stint of the field on his soft tyres. Emerging from the pits in 10th, he used his fresh medium tyres to catch up to Stroll and Ricciardo who were battling for sixth. Norris took advantage of an opening on lap 70 to pick off Ricciardo and then passed Stroll and a wounded Perez on the final lap of the race for a superb fifth.

Ricciardo was out-qualified by Ocon, but was waved past his team mate shortly before a cooling problem put Ocon out. Ricciardo defended from Stroll for the majority of his second stint before falling victim to a lunge which put both off-track, which the stewards allowed to go unpenalised. Somehow, neither Stroll nor Ricciardo managed to beat Perez to the line.

Kvyat was out-qualified by his team mate but finished ahead after Gasly picked up floor damage at the start and struggled for race pace as a result. He came in 15th after making two stops, a stint on hard tyres not helping matters, while Kvyat grabbed a point for 10th.

Raikkonen dropped to last place after the opening lap, but showed great race pace to recover to 11th, aided by Giovinazzi being told to let him past again. Grosjean started from the pit lane after failing to set a time in qualifying due to a water pump problem. He led Magnussen in 13th with six laps left as they hunted down Giovinazzi and the team told Grosjean to let Magnussen through, before both Haas drivers cleared the Alfa Romeo.

George Russell made it out of Q1 for the first time in his career and nearly made it into the final 10. But he lacked the race pace to keep this position. He was defending against Magnussen on lap three when he ran wide at turn six. From there he fell to 18th but eventually recovered to finish ahead of his team mate in 16th.

Nicholas Latifi was set to make it out of Q1 as well but yellow flags in the third sector forced him to abort his final run. He finished the race behind Russell.