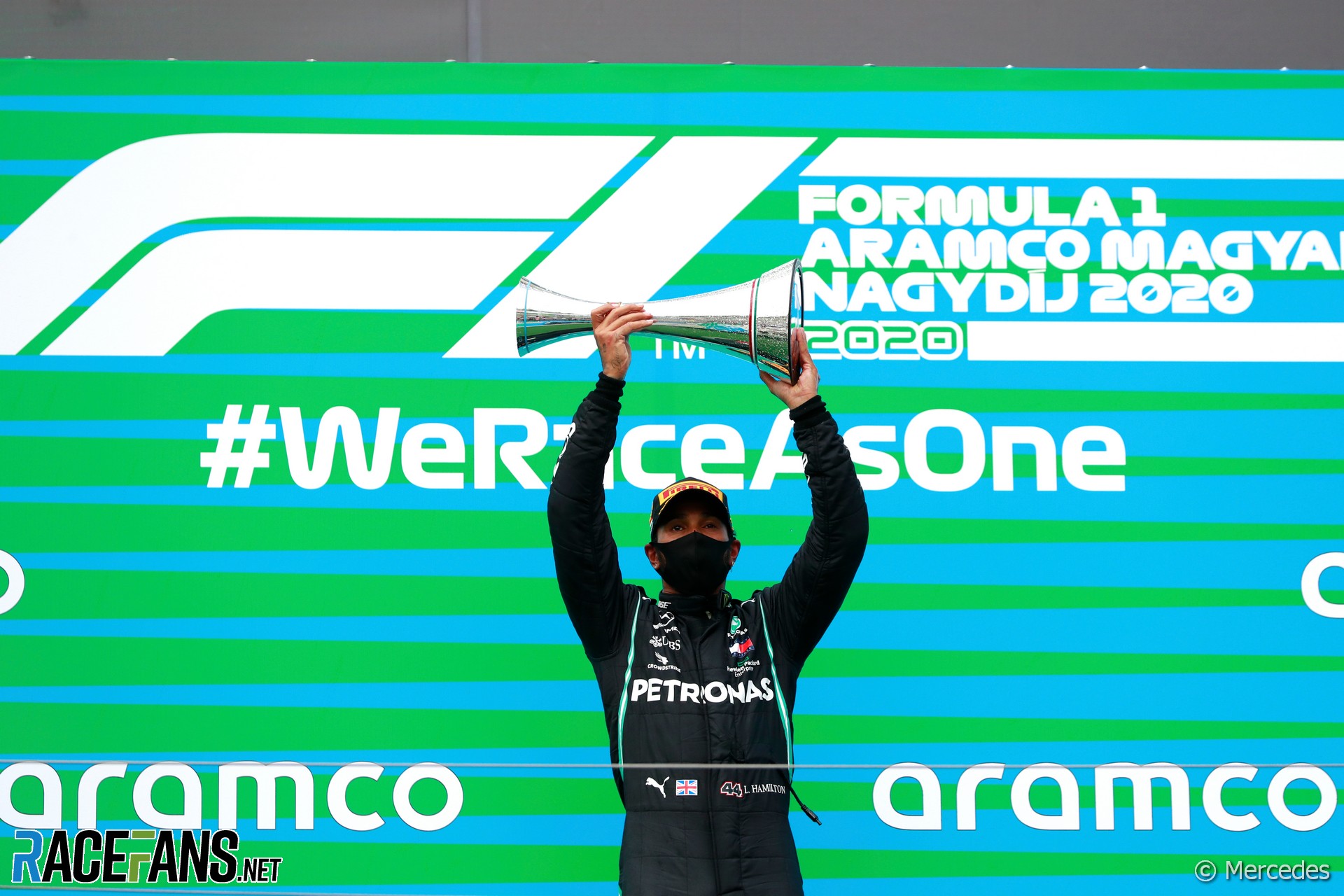 Lewis Hamilton winning the Hungarian Grand Prix has become a familiar sight. He did it for the eighth time on Sunday.

He’s been made to work harder for some of his victories than he did last weekend. Team mate Valtteri Bottas took himself out of contention at the start – actually, fractionally before it – and nothing else was quick enough around the Hungaroring to cause Mercedes the slightest concern.

Red Bull had been expected to provide the closest challenge to Mercedes, but the RB16s looked out of shape from the moment practice began on Friday. Max Verstappen, unfathomably, struggled to seventh on the grid, the best part of a second and a half off Hamilton’s pole position time.

Things looked bad enough already for the Milton Keynes squad, and they got appreciably worse less than half an hour before the start. A shower had thoroughly soaked the track, and while trying to get a feel for the conditions Verstappen snatched a brake at turn 12 and thumped a barrier. That left the front wing and front-left suspension on his RB16 was badly awry.

Verstappen managed to drag his car to the grid, which was crucial, as if repairs could be made this meant he could start from his original position. And, remarkably, Red Bull’s crack team of mechanics got the job done.

“They did that in 12 minutes?” exclaimed Hamilton when he learned of the speedy repair job in the post-race press conference. “Yeah, 12 minutes they managed to repair that, which is crazy,” said Verstappen.

“I was sitting in the car, I could see the mechanics screaming at each other like 10 seconds, five seconds, put the wheel on, everything, the final piece of tape on the suspension to make sure it was sticking. I put my thumbs up and they were like ‘yeah, it’s fixed’.”

Red Bull team principal Christian Horner put the repair time at 20 minutes which, even so, is very quick for what is typically a 90-minute repair job. Just as impressively, Verstappen’s repaired suspension felt as good as new to him.

“I said OK, well then, here we go, let’s see. I was doing the formation laps, I was checking the wheels, I was like ‘this feels alright’. And during the race, nothing weird happened so it was fully repaired.”

The off-line side at the Hungaroring tends to give inferior grip, a phenomenon which is exaggerated in wet conditions. The Formula 2 drivers had discovered that earlier in the morning and it was the case again when the grand prix got underway on a damp track.

Verstappen, on the racing line side of the grid, made superb use of his repaired car. He motored alongside his rivals on the way to turn one for fourth place, and teed up Sebastian Vettel’s twitching Ferrari for third as they headed to turn two. As lap one ended the top four places were filled by drivers who had started on the odd-numbered side of the grid.

Those on the even-numbered side weren’t helped by Bottas making a poor start from second place. He later revealed he’d been distracted by the light panel on his steering wheel and crept forward before the lights went out.

“I believe it was the main page of the dash changed to different colour or something, a pretty bright colour,” he said. “That’s all what needed for me to react.

“I thought the lights went off, I was kind of half-seeing the start lights because of the Halo and the position I was. It was an odd situation.”

As lap two began Hamilton already had a three-second lead over Lance Stroll, who was being pursued by Verstappen, the two Ferraris, Bottas and Sergio Perez – the second Racing Point driver having got away poorly from the second row of the grid.

Further back, the progress of the two Haas drivers was significant. While the rest of the field opted to start the race on intermediate tyres, Kevin Magnussen and Romain Grosjean ducked in for slicks on the formation lap – Magnussen had actually left the grid on full wets. It eventually transpired the team broke the rules through the exchange of radio messages which led to the tyre change, but the 10-second penalties the pair ultimately received were probably cancelled out by the gains they made from being the first drivers on dry weather rubber.

Within a couple of laps, everyone else had noticed the Haas drivers’ sector times and pitted as well. Verstappen opted not to follow Stroll in, so he briefly took the lead, while the Racing Point driver had to pick his way past the Haas drivers.

Stroll tackled Grosjean easily, but Magnussen proved a tougher nut to crack. “I just can’t get past” he complained, adding “it’s impossible” a lap later. “Don’t worry about that,” his engineer replied. “We expect rain to be coming.” Nonetheless, by lap 16 he’d found a way past.

The prospect of further rain shaped the early phase of the race. Ferrari put Leclerc on soft tyres, expecting he’d have to pit again soon. But the shower never came, and Leclerc had to make an early switch to hard tyres which wrecked his hopes of scoring points.

Bottas came by him on lap 10, having already moved ahead of Vettel who’d been delayed in his box after pitting. He then cleared the Haas drivers with little difficulty, but found it harder to pass Stroll. He eventually got ahead by pitting before the Racing Point driver and using the ‘undercut’. Afterwards Stroll felt he could have kept Bottas behind by pitting earlier, but given the Mercedes’ considerable performance advantage, this seems optimistic.

As in the previous race, this left Bottas chasing Verstappen down for second place. But this time he didn’t manage to beat the Red Bull driver. Bottas made an extra pit stop for another set of hard tyres with 21 laps to go, and caught Verstappen quickly, but ran out of time to make a move.

By then Hamilton was so far ahead he could make an extra pit stop too. He came in with four laps to go, fitted a set of soft tyres, and took the bonus point for fastest lap without having to extend himself.

“I didn’t push so much that I was going to make a mistake and go off,” he said afterwards. “It was a fully controlled lap.

Hamilton was undoubtedly right in his assessment; still, on the face of last weekend’s performance it’s hard to imagine how Mercedes are going to lose the championship this year. Asked after the race if he could imagine any scenario in which Hamilton is not crowned champion for a seventh time, Vettel said: “If Valtteri wins it…”

After a lousy qualifying session, the race gave Red Bull some much-needed encouragement. While Verstappen rose to the podium, Alexander Albon gained the most positions of any driver as he fought his way up to fifth place, passing Vettel on the way, though he ended up 70 second behind his team mate.

Vettel was struggling on his tyres by the end of the race and Perez was almost within striking distance as the chequered flag dropped. He might have had a shot at sixth had he not gone off earlier, losing a couple of places. They had Daniel Ricciardo for company at the end of the race as well.

Magnussen came in next, although his penalty dropped him a further place, promoted Carlos Sainz Jnr. The McLaren driver put a well-worked pass on future Ferrari team mate Leclerc, but following their fine showing in Austria it was a poor weekend for the orange cars. Lando Norris came away point-less after starting poorly and losing further time in the pits.

Leclerc took the flag out of the points. Daniil Kvyat, who was among the first to follow the Haas drivers and switch to slicks, came next, mystified by how much of his early track position advantage he lost in the pits. At least he saw the chequered flag: Pierre Gasly, who suffered technical problems all weekend, parked his AlphaTauri in a cloud of smoke in the pits.

Having followed his team mate out of the pits on slicks at the start of the race, Grosjean took the chequered flag over half a minute behind Magnussen, and six places back. His penalty also cost him a place, to Kimi Raikkonen, despite his former Lotus team mate serving a five-second time penalty during the race for failing to line up in his grid slot correctly.

Williams’ joy at getting both cars into Q2 for the first time in almost two years was tempered by the FW43’s poor race performance again. Their cars came in last, Nicholas Latifi losing time with a puncture (caused by the team sending him out of the pits into the side of Sainz’s car) and a spin later on.

Hamilton gave away 24 seconds with that final pit stop, so his eventual winning margin over Verstappen could easily have been half a minute. With Bottas third, Hamilton has moved into the lead of the championship.

That rounded off the first of what looks set to be a series of ‘triple-headers’ for F1 in its reorganised 2020 schedule. The next batch will see the drivers race twice at Hamilton’s Silverstone stronghold and at the Circuit de Catalunya. Mercedes have only been beaten at the latter venue once in the last six years, when Hamilton and Nico Rosberg took each other off at the start.

Those were the bad old days as far as Mercedes is concerned. So far Bottas has shown he is capable of beating Hamilton occasionally, but not yet consistently, and hasn’t got under his skin the way Rosberg used to.

If Bottas really is the only opposition Hamilton is likely to face this year, the coming races are where he must prove it.