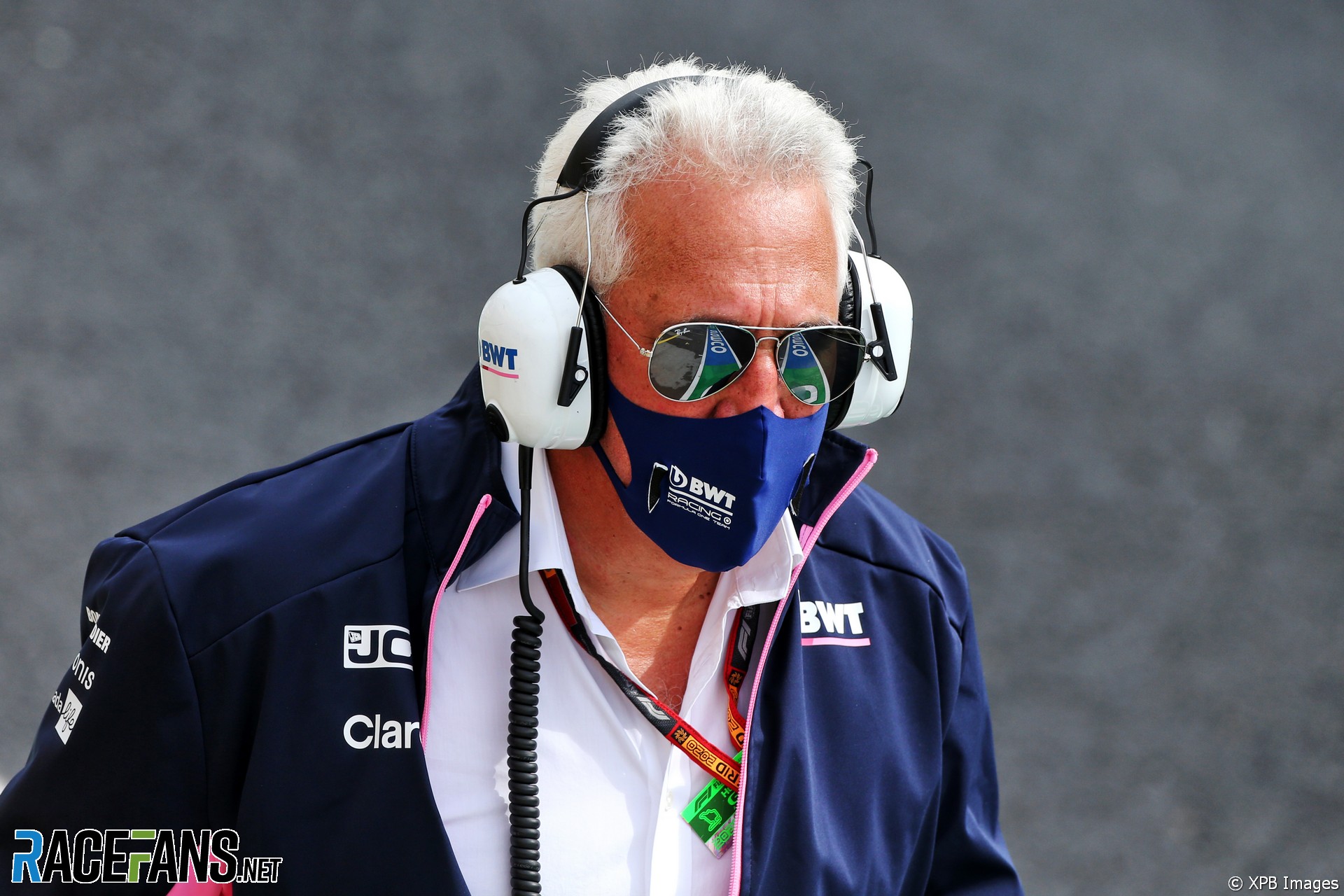 Racing Point co-owner Lawrence Stroll has spoken for the first time on the penalty issued to the team two days ago, saying he is “extremely angry” over claims the team broke the rules.

Stroll, who took over the team two years ago, added he is “appalled” by the responses of Renault, McLaren, Ferrari and Williams to the verdict.

The four teams have notified the FIA they intend to appeal the decision. Some are believed to be seeking a tougher penalty for Racing Point.

Racing Point has also given notice of its intention to appeal. Stroll said he intends to “take all necessary actions to prove our innocence”.

The team was found to have broken the rules by using Mercedes’ 2019 rear brake duct as the basis for the design of its corresponding 2020 parts. It obtained the parts last year, when they were allowed to do so under the rules, but also received a set of ducts in January this year.

As of 2020 teams must design their own brake ducts and may not use those supplied by rival teams. Racing Point, which had not raced the rear ducts Mercedes supplied last year, used them as the basis for its 2020 design. This was found to be in breach of the regulations requiring teams to design their own ‘listed parts’.

In a statement issued by the team, Stroll quoted at length from the decision issued by the stewards on Friday, and insisted this area of the regulations was unclear. “There was an absence of specific guidance or clarification from the FIA in respect to how that transition to ‘Listed Parts’ might be managed within the spirit and intent of the regulations,” he said.

Stroll said his entire team was “shocked and disappointed by the FIA ruling” and he is “truly upset to see the poor sportsmanship of our competitors”.

Good morning and thank you for taking time out of your busy day to listen to this statement.

I do not often speak publicly, however I am extremely angry at any suggestion we have been underhand or have cheated – particularly those comments coming from our competitors. I have never cheated at anything in my life. These accusations are completely unacceptable and not true. My integrity – and that of my team – are beyond question.

Everyone at Racing Point was shocked and disappointed by the FIA ruling and firmly maintain our innocence.

This team, under various names, has competed in Formula 1 for over 30 years and today employs 500 people. We’ve always been a constructor and will continue to be so in the future.

Throughout those 30 years, this team has been an underdog, punching well above its weight with a fantastic group of people. Between 2016 and 2018, this was the fourth best team on the grid, operating on the smallest budget, and scoring regular podiums.

Emerging from administration, with stability and fresh investment, this team’s competitive form should not be a surprise to anybody. The team can finally realise its potential and should be celebrated for its strong performance.

You only have to read the words of the stewards to understand why we are so disappointed by the sanctions. The report clearly states the following mitigating circumstances:

The parts transfer between Mercedes and Racing Point on January 6th 2020 does not constitute a breach of the regulations worthy of censure as the parts in question were both not used and did not expand the information that had previously passed from Mercedes to Racing Point quite legitimately under the regulations in 2019. The recent change of status of the Brake Ducts as Listed Parts further argues that censure or penalisation is not appropriate on this point. These are the words of the stewards.

The lack of detailed focus on Brake Ducts by the FIA personnel who inspected the RP20 in March 2020, when they were admittedly focused on the entire car.

Racing Point could probably have obtained much of the same amount of competitive advantage from photographing the Mercedes W10 Rear Brake Ducts and reverse engineering them, albeit with additional design resources expended in the process, say the stewards.

In every respect regarding this matter, Racing Point has been open and transparent with regard to their actions, which they fully believed to have been compliant with the regulations, and the Stewards attribute no deliberate intent to any breach of the regulations that occurred.

This is all quoted from the stewards’ decision.

There was an absence of specific guidance or clarification from the FIA in respect to how that transition to Listed Parts might be managed within the spirit and intent of the regulations. The rules, as they are written, state that after 2019, no further information on brake duct design can be shared or acquired. At that point, what you know and have learned, is your own information. From that point onwards, you are on your own. Which is exactly what we have done.

So, to clarify, there was no guidance in place by the FIA surrounding the transition of non-listed to listed items and Racing Point received in March 2020 written confirmation from the FIA with regards to our compliance on the matter.

This week I was also shocked to see the FIA introduced a new grandfather clause, which had never previously existed.

Beyond the clear fact that Racing Point complied with the technical regulations, I am appalled by the way Renault, McLaren, Ferrari and Williams have taken this opportunity to appeal, and in doing so attempted to detract from our performances. They are dragging our name through the mud and I will not stand by nor accept this.

I intend to take all necessary actions to prove our innocence.

My team has worked tirelessly to deliver the competitive car we have on the grid. I am truly upset to see the poor sportsmanship of our competitors.

I understand that the situation in which the FIA finds itself is difficult and complicated for many reasons, but I also respect and appreciate their efforts to try and find a solution in the best interests of the sport.