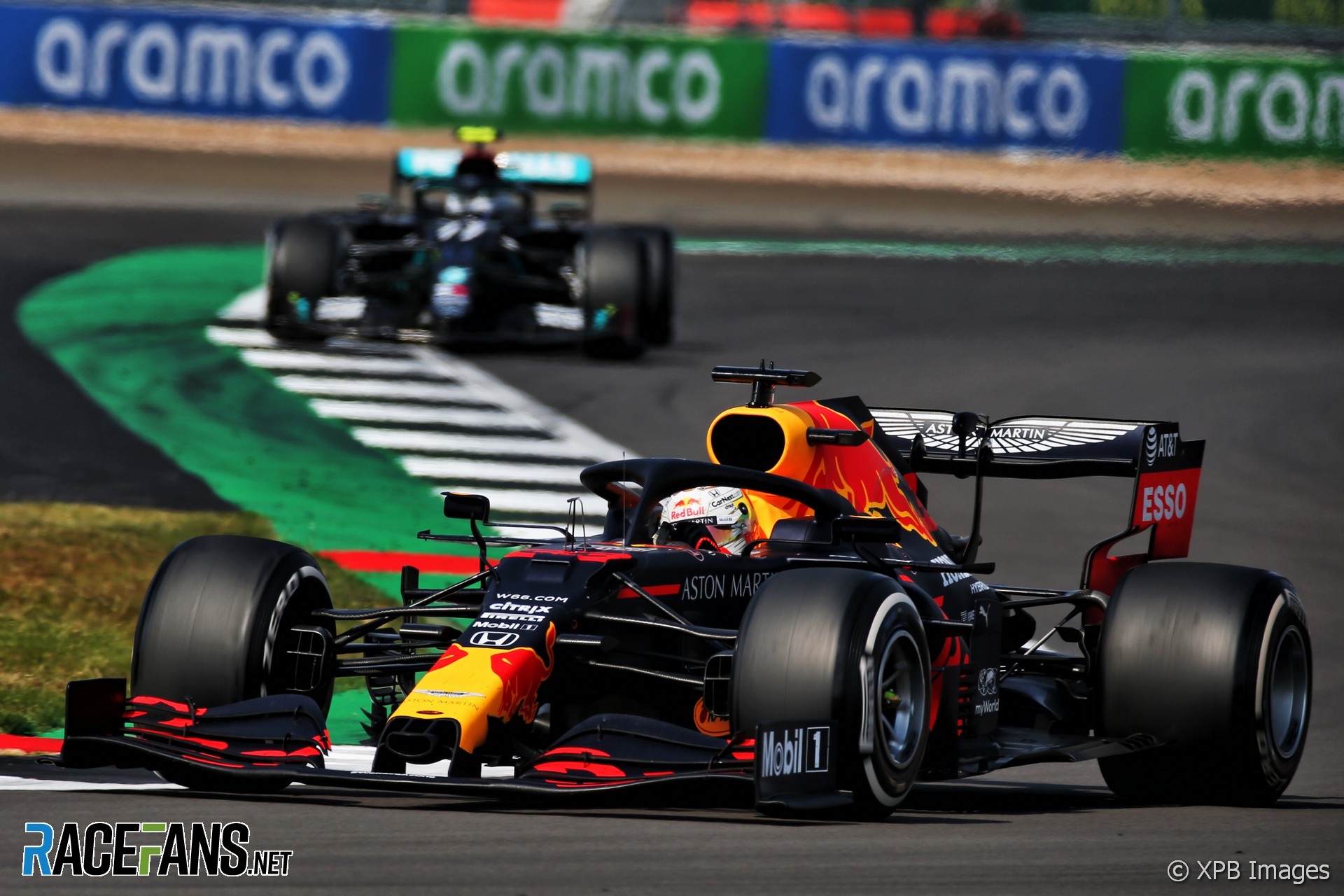 The contest for victory at Silverstone was unexpected but ultimately straightforward.

The Mercedes devoured its tyres: Its Pirellis were pulled from the two W11s ravaged by blisters. The particular cocktail of temperature, pressure and forces that car exerted on the rubber was clearly too much for it.

The Red Bull, meanwhile, looked as those it was using a completely different product, even when both cars were on the same compound. It helped that Max Verstappen had taken the gutsy step of qualifying for the race on the hard tyres, but in the final reckoning he probably didn’t need too.

Behind them, Pirelli’s decision to bring softer tyres than they had one week earlier undoubtedly shaped the race. But it was striking that those who had the best afternoon were largely those who pulled off one-stop strategies – something few thought possible before the race began.

Valtteri Bottas started from pole position, as he did at this track during last year’s British Grand Prix. F1 has raced at Silverstone once already since then, of course; this ’70th Anniversary Grand Prix’ was arranged to bolster F1’s Covid-19-hit calendar.

So Bottas led the field away for its second 52-lap encounter this year at the track where the world championship began in 1950. Lewis Hamilton gave chase. Behind them Verstappen, despite starting on hard tyres, quickly dispensed with Nico Hulkenberg, who in his second weekend back had qualified his Racing Point a superb third.

Mercedes’ plight became clear quickly. Starting on the mediums, their lap times rose pretty much in unison, Hamilton’s tyres fading slightly earlier as he ran in his team mate’s slipstream. By lap five Verstappen was quicker than the pair of them, and having been 3.9s adrift at one point he was within a second of Hamilton by lap 10.

That set off alarm bells on the Red Bull pit wall: Verstappen’s team still weren’t sure how long their hard tyres would last, and sitting in the slipstream of two W11s might overcook them. Verstappen, however, could feel the rubber and sensed his Pirellis were holding up just fine.

“I was already managing but their tyres were completely gone,” he said afterwards. “I could see the tyres opening up. It was very expected with these tyres, especially on high fuel, when the car is very heavy.”

While Red Bull urged him to back off Verstappen was having none of it. “This is the only chance of being close to the Mercedes,” he said, “I’m not sitting behind like a grandma.”

(Both his parents are racers, but going off these and similar comments Verstappen has made in the past, perhaps some of the previous generation was not as hot behind the wheel.)

“I didn’t just want to sit behind like I’ve been doing at the previous races all the time,” Verstappen explained afterwards. “Once I had the opportunity to put a bit of pressure on, I want to do that. So, I tried.

“I had a big moment once, when I was close to Lewis in turn 13 [Becketts], because it’s really hard to follow, even when I have the grip advantage with these tyres. But of course then it was just impossible for them to continue, so they boxed. And that’s where my race started.

“But I hate sitting back, especially when you see that the car is actually pretty decent. Sometimes it can be a bit of suicide, killing your tyres, trying to hang on desperately but I don’t think that was the case today.”

Mercedes’ hopes their day would improve once they got onto the hards were quickly dashed. By lap 20 Verstappen was quicker on his old tyres than they were on their new rubber. That was the point at which a Red Bull victory became the likeliest outcome, barring misfortune.

When Verstappen finally pitted he came out ahead of Hamilton and close to Bottas. He dispensed with the lead Mercedes within half a lap, the Red Bull enjoying an embarrassment of extra grip over the hitherto dominant W11. Bottas’s complaint that he might have kept it behind had been allowed to run a quicker pace earlier in his stint was wishful thinking.

However Bottas had cause to feel miffed that at this point his crew didn’t pay more attention to Hamilton behind him than Verstappen ahead. By following Verstappen into the pits on lap 32 – the Red Bull having done just half-a-dozen laps on mediums – Bottas handed Hamilton a chance to run longer, fit softer tyres, and pass his team mate.

That is exactly what happened. However the team did give some consideration to not pitting again. This would have meant a 38-lap run on the hard tyres which, considering how sharply Charles Leclerc’s 34-lap-old rubber degraded at the end of the race, probably wouldn’t have paid off.

“I was trying to go for a one-stop at the end but there was a lot of vibration with the tyres that we had and I didn’t know if the tyre was going to last,” said Hamilton. “Not just with the rubber, but a rear tyre blow-out through a corner was too big a risk to take – that would have been end of race. So I think it was a good decision by the team.”

The podium positions were therefore decided by the superiority of the Red Bull. Behind them two factors drove most of the changes of position: Who dared to run a one-stop strategy, and who got spooked by their tyres.

Leclerc decided before he got to the grid he wanted to run a one-stop strategy. He has done this well in the past – recall his hyper-soft/super-soft run to seventh in Mexico two years ago, while being told multiple times per lap to moderate his pace.

That gamble paid off handsomely. From eighth on the grid he rose to fourth ahead of those who came in twice.

Those who banked on a two-stop strategy from the outset, and tried to win an advantage by pitting early for fresh tyres, got a reminder that the current generation of F1 cars are too resistant to being overtaken for that approach to work. This, in a nutshell, is why softer tyres tend to produce races of tyre management rather than fireworks, particularly as a season wears on and teams gain greater understanding of their tyres.

The car best-placed to make a two-stop work was the Red Bull, being both the quickest and kindest to its tyres. Alexander Albon was first to pit, but the strategy backfired immediately. “At the start of the race with everyone in traffic we tried to pit early but we came out in more traffic and we lost just huge amounts of time.”

AlphaTauri reacted to Albon’s strategy and succeeded only in ruining Pierre Gasly’s superb qualifying effort. “I got the call after seven laps only to box,” he explained. “I was a bit surprised.

“We ended up behind all the Williams, Haas, Sauber [Alfa Romeo] and we had to fight very early on in the stint. After five, six laps I had blistering on the rear and from this moment I understood this wasn’t going to be fun.”

With the midfield so tightly compressed – ordinarily a good thing – they ran line astern, DRS uselessly flapping away, and even the advantage of fresh tyres making little impact. “When there’s a DRS train there’s just no grip at all,” said Albon. “[But] when you have a guy just by himself in front, you can do different lines, you can find the pockets of air.”

Renault hoped to one-stop but compromised themselves by being the only team to run a set of hard tyres on Friday. Daniel Ricciardo then had a spin – “a Seb spin”, as he cheekily named it – which spoiled his day. Team mate Esteban Ocon, however, made amends for an indifferent qualifying performance by pulling off a one-stop strategy and rising six places to eighth.

Ocon finished behind the two pink cars of his former team. Hulkenberg lost seventh to team mate Lance Stroll after making a third pit stop, prompted by tyre concerns. Albon eventually broke free of the midfield pack to take fifth, but having led Leclerc early on, seeing the one-stopping Ferrari ahead of him at the end made it clear his two-stopper had been a mistake.

Lando Norris and Daniil Kvyat completed the points-scorers, the latter moving ahead of his team mate thanks to a more conventionally-timed two-stop strategy. Sebastian Vettel, 12th, was another member of the ‘I should’ve one-stopped’ club and also the founder of the ‘I shouldn’t have spun at turn one on the first lap’ society.

Because Hamilton won at Silverstone a week earlier, it was easy to read that race as a continuation of Mercedes’ dominance, and forget the fact he taxed his tyres so hard over the course of the race that one failed on the final lap.

As a result of that failure and others, Pirelli imposed new usage restrictions last weekend. That plus the softer tyres and hotter weather created the conditions for an unexpected Mercedes defeat. These circumstances may recur in future races, so Mercedes cannot take it for granted that last weekend will be a one-off.

Mercedes are, of course, extremely good at identifying and tackling problems such as these. But they face an unusually high time pressure to solve it: the third race of the current triple-header is this weekend, and after one week off there’s another three-race onslaught where temperatures, forces, pressures and degradation may again be high.

At the very least, Red Bull has proved the championship may not turn out to be a Mercedes benefit it looked like after the first four races. They’ll be hoping for a long, hot European summer.