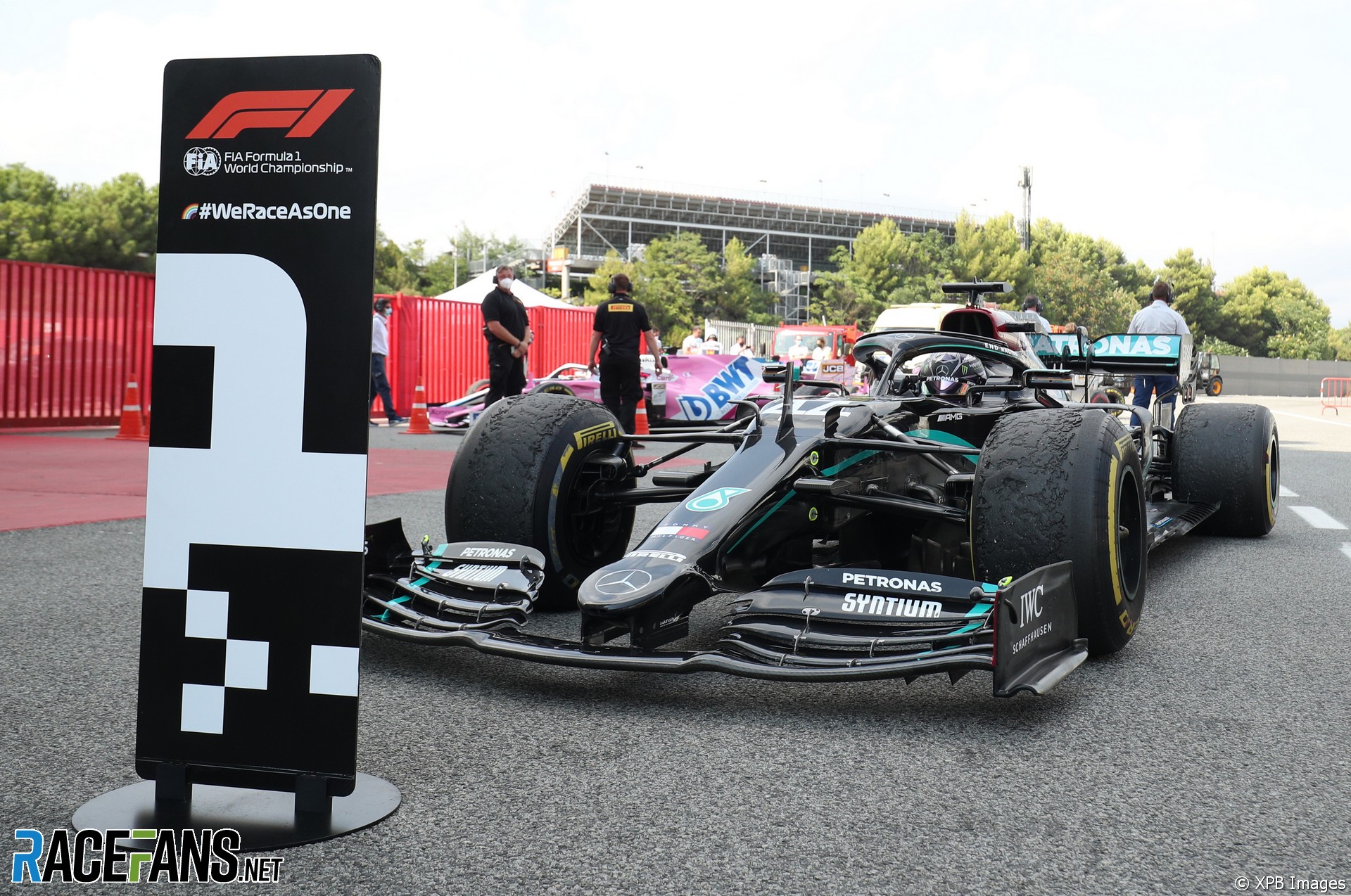 Given how persistently Mercedes play down their performance and talk up the threat from their rivals, Lewis Hamilton’s emphatic victory in the Spanish Grand Prix invited the interpretation that the team was never realistically under threat from Red Bull.

His eventual 24-second margin over Max Verstappen demonstrated that, despite the high temperatures which worried them after Silverstone, Mercedes had their rivals handled.

It would be easy to understate the quality of job Hamilton did. His team mate Valtteri Bottas fell from 3.3 seconds behind nine laps in, to 24 seconds adrift at the point he made an extra pit stop to grab the bonus point for fastest lap. While the fading threat of Verstappen accounted for some of that gap, Hamilton’s skilful management of his tyres also had a lot to do with it.

Not that he finds it a particularly rewarding way of going racing, as he made clear afterwards.

Bottas gets away badly

Mercedes swept the front row of the grid for the fourth race in a row. Perhaps the ban on ‘quali modes’ the FIA intends to implement before the next race will change that at Spa, but that lies in the future.

With Max Verstappen third, this promised to be another scrap between two Mercedes and one Red Bull – possibly two, if Alexander Albon could get out from behind the Racing Points, which had bumped him back to sixth place.

But within seconds of the start it seemed we would get a two-way fight battle at best. Valtteri Bottas, second on the grid, made a sluggish getaway, as did Sergio Perez immediately behind him. Hamilton, Verstappen and Lance Stroll started much better from first, third and fifth, so perhaps the racing line side of the grid just had a little more grip.

Bottas moved to cover Verstappen, but was too late, and as he moved right found Stroll poking his nose alongside. Hanging tight to the dusty inside line, the Racing Point driver nailed his braking point and, to the dismay of Bottas, took third place off him. Perez nearly had Bottas for fourth on the inside of turn three, but Bottas was on the racing line, had the grip, and held the place.

Having stemmed the loss of positions, Bottas went after Stroll, and by lap five nailed him easily into turn one. The pink facsimile of last year’s Mercedes didn’t even move off-line in defence, which was less a surrender on Stroll’s part than a recognition of the futility of trying to hold back a much faster car with its DRS activated.

With that, the field split into its two constituent parts: The Mercedes pair sandwiching Verstappen, and the rest. By the chequered flag ‘the rest’ would be over 100 seconds behind the victorious Hamilton.

Verstappen’s Friday pace had spooked Mercedes, so Hamilton took it easy in the opening laps. He toured around in the low 1’24s, almost nine seconds slower than his pole position time from 24 hours earlier.

“He’s just driving super-slow,” complained Verstappen as he tracked the Mercedes. But on lap 10 Hamilton suddenly upped the pace – and the Red Bull driver couldn’t follow him. In five laps Hamilton more than doubled his lead to four seconds.

Verstappen soon began making loud comments about the performance of his tyres. Red Bull, eager to keep him in the fight for the lead, were monitoring his growing gap over the Racing Points behind, hoping to pit him without falling behind them. “Who cares if they get in front, I’m easily faster,” urged Verstappen.

Red Bull finally brought him in on the 21st lap and, in their eagerness to keep Verstappen on terms with Hamilton, treated him to the fastest pit stop of the race (they swept the top three places). But it was no use: Mercedes were able to leave Hamilton out two laps longer and, despite a sluggish stop due to a slow left-rear wheel change, maintain the lead.

Bottas came in on the same lap, but having been 10 seconds behind Hamilton beforehand was not disadvantaged by his team mate’s slow stop. The top three had now all traded their soft tyres for mediums, and briefly converged within five seconds of each other, until Verstappen’s tyres began to go off again. He had dragged Bottas 11 seconds away from Hamilton before finally pitting for fresh tyres on lap 42.

Bottas stayed out seven more laps before pitting, then came in for a set of soft tyres. Having rejoined six-and-a-half seconds behind Verstappen, the thinking was he would chase down the Red Bull over the remaining 17 laps. But he made little impression on his rival. Had his team chosen the wrong tyres?

“When we looked at the first stint, the soft tyre performed really well,” said team principal Toto Wolff. “We could extend the stint. The grip was there. It was the logical choice to go on the soft for the last remaining 15 or 20-odd laps. Nothing really indicated that the tyre wouldn’t perform. So that was not a mistake from the team because, on the contrary, the soft is the quickest tyre.”

Hamilton, who made his final pit stop two laps later than his team mate, demonstrated his feel for the rubber again, over-ruling Mercedes’ compound choice and insisting on a set of mediums. Wolff admitted Hamilton’s judgement was “impressive” under the circumstances. “He felt that the medium was the tyre that he wanted to have so he made that call.”

With that, Hamilton motored home to a dominant win. Verstappen collected a second place which might have gone to Bottas with a better start and/or strategy. Bottas made a third pit stop to take fresh tyres and secure the bonus point for fastest lap.

Reflecting on Hamilton’s tyre call, Wolff added: “What I’m really happy about is that the open conversation and transparency that we have between driver and team. That is not something that’s obvious. There are teams where the driver calls the shots, there are teams where the engineering calls the shots, but within our organisation, we’re able to listen to each other and and come up with the best decision.”

Not every team had the same reason to be pleased with their tactical calls. Ferrari again appeared to treat Sebastian Vettel’s race as an afterthought, even after Charles Leclerc had gone out with electrical problems.

Having originally told Vettel to push on his second set of tyres, planning to bring him in again, they then asked him if he could make his soft rubber last until the end of the race. This prompted an exasperated reaction from the driver, and after a testy exchange, a one-stop strategy was settled on.

The call paid off, though Vettel slipped to seventh by the flag. Stroll’s two-stopping Racing Point was one of the cars which passed him, and he took the chequered flag behind his one-stopping team mate. Perez, back in the cockpit following his Silverstone absences, was demoted to fifth behind Stroll after the stewards ruled he had been too slow to let Hamilton lap him.

A despondent-sounding Alexander Albon collected eighth, two places lower than he’d started. He ran sixth until lap 16, when Red Bull put him on the hard tyre, a compound no other driver used in the race, and which some of his rivals described as “horrific”, “garbage” and “deserving no place on a Formula 1 car” after testing it on Friday. Whether they thought they might get him to the end of the race on the tyres, or if Albon was being used as a ‘guinea pig’ for his team mate’s pit stop four laps later, it left him stuck in traffic.

It didn’t even manage to go the distance, prompting a second pit stop on lap 39. Albon took the chequered flag half a second ahead of the driver he replaced at Red Bull 12 months ago, Pierre Gasly, after another excellent qualifying performance by the AlphaTauri man. Lando Norris collected the final point for McLaren.

Leclerc was the day’s only retirement – alarmingly, after completing two laps with his seat belt undone. The Renault and Haas drivers laboured on one-stop strategies, Romain Grosjean abandoning his after a spin. Kimi Raikkonen had probably his best weekend of the year so far, 14th being the limit of what the Alfa Romeo could do.

“I don’t think that’s what the fans want”

After the race, Hamilton described how he felt “in the zone” over the course of an impeccably-judged 66 laps of the Circuit de Catalunya. But he was coy about the exactly how he’d coaxed the best from his tyres.

“It was just in the management and the strategy that I chose in terms of when and where to push. How I was able to implement that was really not necessarily what the team initially thought was what we needed to do. But it was the execution that was just on point.”

There was a time, some years and scores of victories ago, when Hamilton’s critics asserted his key weakness was an inability to manage his tyres. That has been long forgotten over the course of his 88 victories.

But as he made clear afterwards, however well he has refined these skills, this hasn’t reconciled him to the current era of high tyre management.

“[It was] a serious amount of management today,” he said. “And I don’t think that’s what the fans want. That’s not what a racing driver wants to have to manage behind a car, multiple seconds behind, because the tyres are not good enough.”