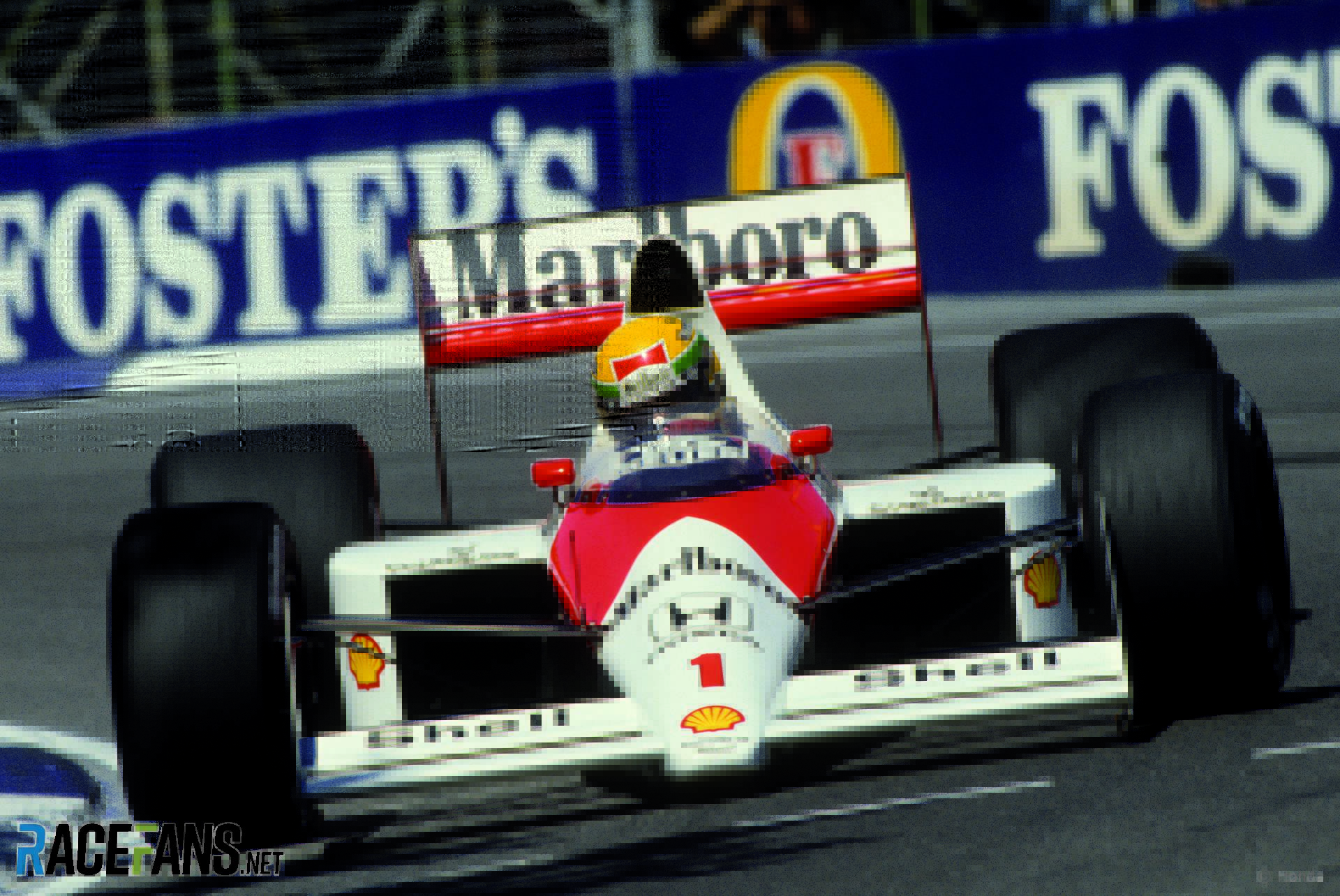 Naming Ayrton Senna as the fastest driver ever to have raced in Formula 1 is not exactly a controversial opinion.

The three-times champion was a renowned master of the flying lap. He took his first pole position in 1985, and just four years later equalled Jim Clark’s then-record of 33 poles.

By the time Senna met his own untimely end in 1994, he had almost doubled that tally to 65 pole positions from 162 appearances. That record eventually fell, to Michael Schumacher, but it took the German ace until his 233rd appearance to equal Senna.

Their names appeared first and second in a list of the fastest Formula 1 drivers ever as determined by official research produced by the sport in conjunction with sponsor Amazon Web Services. Lewis Hamilton – who claimed the all-time pole positions record in 2017 – makes a similarly uncontroversial appearance behind them in third place.

But the ranking of several other drivers on the list produced debate and even derision. Heikki Kovalainen ahead of Sebastian Vettel? Jarno Trulli quicker than Alain Prost?

“I don’t think they’re laughing at it, I think it’s caused some friendly debate,” said Ross Brawn, Formula 1’s managing director of motorsport, in a video conference interview with media including RaceFans yesterday.

“I think when you understand the methodology then I think people will start to understand.” However he admits the results which have been produced are “controversial”.

Brawn stresses the list is intended to reflect only the ultimate one-lap performance of drivers, and no other aspect of their abilities. It was produced by examining qualifying performances since 1983 between pairs of team mates as they, theoretically, have the same equipment at their disposal and therefore form a good basis for comparison.

“We look at two team mates, exactly the same day, same situation, same opportunity,” Brawn explains. “And we set a time increment between those two team mates and you build that up over time to see how that’s averaging.

“Then you build that out with enough information and analysis to start to understand who are the quick guys and who consistently out-performed their team mates and by how much.”

Brawn, who guided the likes of Ferrari and Benetton to championship success and laid the groundwork for Mercedes to become the all-conquering machine it is today, says similar research is conducted by teams to inform their decisions on which drivers to sign. Such as at Mercedes in 2012, when Hamilton was hired to replace Schumacher.

“When I was at Mercedes the strategy guys there did a lot of analysis on drivers. We got Lewis after Michael, and that was obviously a very simple decision, but because we didn’t know we could get Lewis we did an awful lot of analysis of other drivers.

“We actually came up with Nico Hulkenberg when we were trying to sign Lewis as our back-up. James Vowles did all the analysis of Nico’s career and what he was like compared to his team mates, his consistency of lap times in the race, even going as far as trying to understand if he was harder on tyres or easier on the equipment.”

Rob Smedley, who worked alongside Brawn at Ferrari during the peak of the team’s success, and is now F1’s director of data systems, admitted there are some limitations to the model which they had to work around. For example, between 2003 and 2009 drivers carried the fuel loads they would start the race with during qualifying. Therefore their lap times could vary as a result of differences in fuel weight.

This was not taken into account in the model, as Smedley explained. “We took a decision that Formula 1 of that era ‘was what it was’, to put it in layman’s terms.

“So when we’re talking about different fuel loads, if you talk about the period in the early 2000s when we had to qualify with the race fuel, we haven’t normalised for that. And the reason why we haven’t normalised for that is – we looked at this in a reasonable amount of detail – if you look between team mates then the median difference was, I think, 1.5 laps [of fuel] and in 1.5 laps with that era of cars, you’re probably in the region of around about 40 milliseconds difference.

Other potential influencing factors such as differences between tyre compounds and engine performance settings could also be safely discounted, Smedley says.

“Tyres you don’t really need to consider, which is the beauty of taking the qualifying lap because even in the current format we can always ensure that everybody’s on the softest or the quickest tyre.

“It’s the same with with engine modes which have become a bit of a tool to be used not only in this era but in previous eras as well. If you go back to pre-parc ferme when we had quali engines, there was a difference between the quali and the race engine. There’s a difference between the modes that you would run in qualifying and the race if you look at this area. But again, it all normalises itself.”

One of the more surprising outcomes of the model was the comparatively high ranking of less experienced drivers such Lando Norris, who started his 27th race last weekend. Smedley admits it’s harder to have confidence in the rankings of drivers they have less data on, but says it doesn’t necessarily follow that more experienced and famously rapid drivers such as Juan Pablo Montoya should be ranked higher.

“If you take a driver who’s at the very advent of his career who’s had very few seasons under his belt, like Lando, obviously we would have less confidence in that result than if exactly the same driver was placed there in the year 2030 having had 11 or 12 years in Formula 1. That’s just mathematics and we can’t get around that.

“But because we don’t want to tamper with the result – there are some ways in which we can tune the model to account for the fact that a driver is in his first season, which we do – but you can’t really go any further than that. If the results are that it places Lando in the top 20 and Juan Pablo not, then because this is a very objective exercise in trying to answer a subjective question, it would be wrong for any of us to go and tamper.

“Because if you think that somebody’s personal leaning is that the Lando and Montoya pairing is wrong, somebody else’s personal feeling will be different about another driver pairing. So it’s difficult for us to go in and get this to agree with everybody’s opinions. I don’t think it ever could. All we can do is just present a really objective methodology and then explain the process behind that methodology.”

At present the study is limited to the last 37 years of a sport which spans seven decades. Smedley says “it’s definitely planned that that we want to go further back” through F1’s history, but the limitations of the available data prevented that for this first iteration of the study.

“If you go back even further into the seventies and the sixties, we’re into essentially curated, handwritten data.

“That’s an exercise that we want to absolutely move it to, I don’t really want to give you a timeframe on that in terms of when we’ll execute on that, but it’s definitely something we want to do. But that was just going to be time prohibitive to get the first version out.”

As for some of the more controversial rankings in the list, Brawn and Smedley believe they are vindicated by real-world experiences of the drivers.

“I was talking to Steve Nielsen who worked with Trulli at Benetton/Renault,” says Brawn. “He said he was incredibly quick, he was just stunningly quick, he just couldn’t put more than five laps together which is why he never became world champion.

“It’s very important to understand I’m not criticising Jarno, what I’m saying is that this is the fastest driver and the fact that some of these guys were not world champions was because the rest of the skillset wasn’t as strong. It’s the same with Kovalainen if you look at his team mates he had a very strong qualifying record against his team mates.”

Smedely concurs with the verdict on Trulli. “I worked with him at Jordan,” he says. “He was incredibly quick. But not on a Sunday.”

“I am popular in a few places but, I would say, predominantly unpopular at the minute with most of the people on the grid…”

Formula 1/AWS ranking of the fastest drivers since 1983