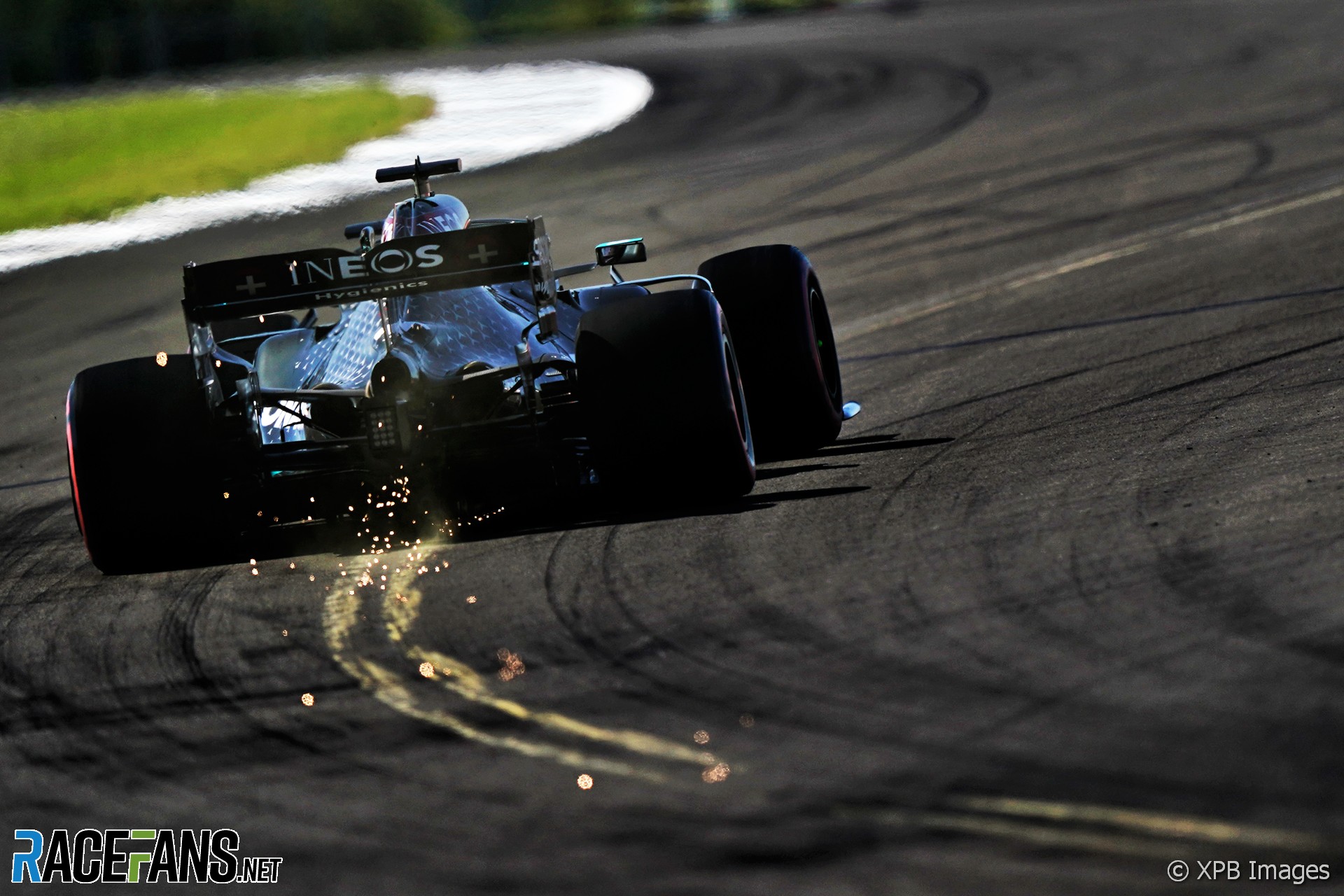 Formula 1 cars are faster than ever in 2020, and may prove to be the fastest we see for many years to come.

Track records have fallen at three of the four circuits the championship has raced at so far this year. But those falling lap times mean ever higher cornering speeds. That, plus the growing weight of the cars, means their tyres are under great strain than ever.

The sport’s official tyre supplier Pirelli discovered this at Silverstone, where its hardest compound was pushed to the limit. Prompted by an early Safety Car period, teams ran long stints on the tyres in the race, which led to several drivers experiencing late tyre failures during the final laps.

Speaking exclusively to RaceFans, Pirelli head of motorsport and F1 Mario Isola gave insight into the forces its tyres are being subjected to by the fastest-ever generation of F1 cars.

“In a condition like 2019-2020 where the technical regulations are consistent, the normal [performance] increase is in the range of 10%. It is reflected on the lap time, average lap time, of an improvement of one to 1.5 seconds. That is a normal situation.”

This is not necessarily always reflected in real world differences in lap time at every track (below) due to variations in conditions from year to year. Particularly so in 2020, as some races are being held outside of their usual windows: The Spanish Grand Prix was moved back three months and run in much hotter weather than usual, for instance.

Silverstone is one of the most demanding circuits for tyres, and through its quickest cars some spectacular forces were recorded.

Each of these simultaneous forces is therefore well in excess of the weight of a current F1 car fully loaded with fuel.

“Then you are braking, you have traction from the rear, so there are many other loads and forces that are acting on the construction of the tyre. That’s why we have we have to monitor that and improve the construction.”

The failures seen at Silverstone were a result of the highest forces Pirelli has ever encountered, it said. Unsurprisingly the two quickest cars in the field – the Mercedes W11s – were both among the three cars which suffered late-race front-left tyre failures in the closing laps.

Pirelli ordinarily revises its compounds from year to year. This did not happen in 2020 as the teams unanimously rejected the tyres which were developed for this season. Isola believes those unraced prototypes would have been better able to withstand the severe forces modern F1 cars are generating.

“The reason why every year we change the product – that is something that didn’t happen last year to this year – is that we increase the level of the integrity or the level of stress that the construction can sustain.”

This weekend F1 heads to Spa-Francorchamps, where corners such as Eau Rouge, Raidillon, Pouhon and Blanchimont will deal another hammering to the tyres. This is another circuit where Pirelli has experienced tyre problems in the past, notably for Nico Rosberg and Sebastian Vettel five years ago.

But while the demands of Spa and Silverstone were foreseen, Pirelli faces an added challenge this year. The disruption caused by the pandemic has led to several new circuits being added to the calendar.

Some of these may prove particularly demanding for the tyres. Mugello, for instance, features many high-speed corners in quick succession. A return to Istanbul Park is expected, meaning F1 cars will once again tackle its renowned, quadruple-apex left-hand turn eight.

Isola says Pirelli “need to supply tyres that can support any load” and will draw on their experience of these circuits from other championships to ensure they are well-prepared.

“We have worked together with FOM and the FIA in order to get simulations and understand which is the level of load also for a new circuit like Mugello or Portimao that is also quite high severity.

“We have experience with other categories because we supply many championships. We go to Mugello, to Imola and Portimao for example, with GT cars more than once per year.

“But Formula 1 cars are different so we need proper simulations to understand the level of load or to predict the level of load and then come back with an idea of prescriptions. That means limitation in camber and pressure.”

However demanding these new circuits prove to be for the tyres, Pirelli has to ensure its 2019 compound range performs at them.

“Obviously we’re not here to say we are not going or we are going to a certain circuit,” said Isola. “It’s a very difficult year for everybody with this pandemic, with this situation.

“F1 is putting a lot of a very big effort in trying to put together a calendar. Europe at the moment is the place where we can race so they are looking for new circuits.”

F1 will visit the first of these new venues, Mugello, in three weeks’ time. Isola expects these tracks will bring a welcome extra challenge for the teams which may even produce some unexpected results.

“It could be interesting and nice because there is a bit more unpredictability. For the engineers it will be more difficult to set up the car. Think about Imola, if it is a two-day event they will not have a lot of time to set up the cars and so on.”

This was supposed to be the last season before new rules both cut downforce levels and introduced 18-inch wheels to F1. This has now been postponed by a year.

In order to assist Pirelli, F1 announced changes to the cars’ floors for next year to reduce downforce and therefore alleviate the high forces the tyres are experiencing. Following the Silverstone failures it told teams further changes would be made to ease the strain on the tyres.

Record-breaking lap times and extreme corning forces are therefore likely to be a thing of the past in 2021.