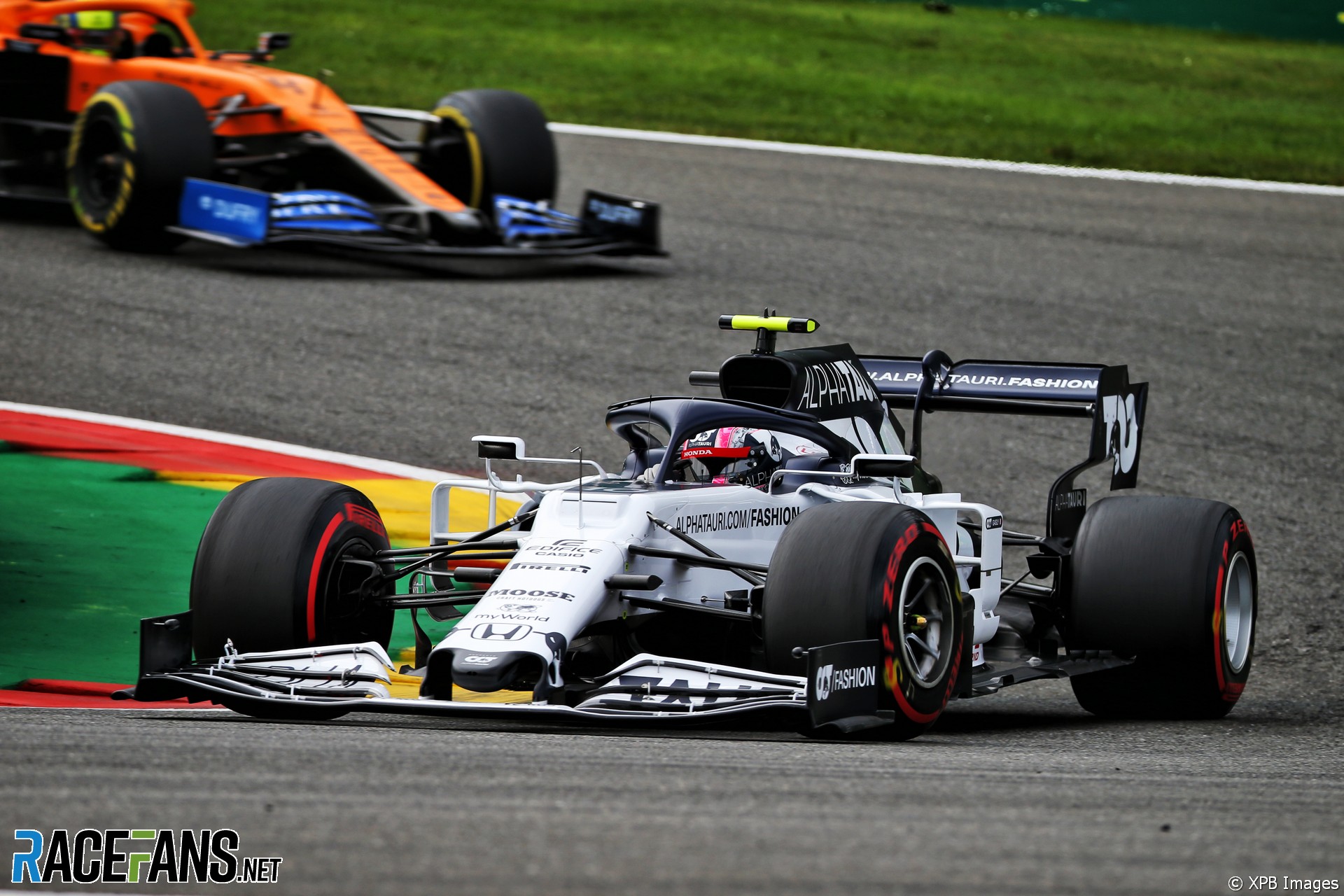 Before the Belgian Grand Prix weekend began, weather forecasts indicated a low risk of rain on the first day which would rise over the following 48 hours.

But already those forecasts seem to be shifting. Rain fell during today’s F3 qualifying session, leaving the track damp ahead of second practice, and a downpour later in the afternoon forced the Porsche Supercup series to abandon its practice session.

Revised predictions for the coming days point to a rising chance of a dry Saturday. And the rain forecast for Sunday now looks increasingly likely to arrive after the chequered flag falls.

This has various ramifications for the teams ahead of qualifying. Picking a downforce level is always tricky at Spa as increasing the wing angle sacrifices straight-line speed through sectors one and three in favour of better performance in the middle sector. The possibility of rain on Sunday will increase the temptation to run a bit more wing.

If qualifying is dry, we can expect to see more drama as drivers vie for an optimum position in the queue. There is a benefit to be had from running close enough to another car to gain from the slipstream on the straights without suffering too much from the turbulent air in the corners.

These tactics led to farcical scenes at Monza last year where most drivers failed to set a time on their final runs in Q3. There was a near-miss in similar circumstances in qualifying at Spa a week earlier. A similar situation is possible this weekend, as Kevin Magnussen explained.

“At some tracks there’s this situation where there’s a tendency for drivers to slow down before the last corner in order to manage gaps because we’re trying to get the right gap for a tow to work in an optimum way without hurting your downforce and aero too much in the corners,” he said. “So there’s this situation where people bunch up and sometimes you start running out of time and people start overtaking each other and it gets a bit messy.

“There was talk about this ‘gentlemen’s agreement’ not to overtake each other before the lap in the last corner. But obviously we’ve seen that people do overtake and then it becomes difficult to not do that yourself as well. So I don’t know what the solution is, if there’s anything the FIA can do to really stop us from doing it. It’s a tricky one.”

The performance advantage Mercedes have enjoyed in recent race weekends was strikingly absent on Friday. This is normally followed by a chorus of ‘but they can turn their engines up tomorrow’. That’s true this weekend, but it won’t be from the next round at Monza when ‘quali modes’ are banned.

The W11s were comfortably quickest through the middle sector, but Lewis Hamilton and Valtteri Bottas were in the bottom half of the times for sectors one and three. It’s hard to imagine they won’t be closer to their usual form on Saturday, but remember just two years ago at this track they struggled particularly with the two very slow corners which bookend this otherwise medium-high speed course.

Both Mercedes and Red Bull have brought some updates for their cars. The latter seem to have found an immediate improvement: Alexander Albon praised the the difference they made to his RB16, and he looked more comfortable than in recent races.

The same couldn’t be said for Ferrari, however, who on the strength of their second practice times might expect a struggle to get out of Q1, never mind Q2. “I suppose they’re struggling a lot here because we all know about their engine deficit,” said Carlos Sainz Jnr, one eye on his future team. “It’s not a good track for having an engine deficit.”

The skinny rear wings on the SF1000s made it abundantly clear they had trimmed out their car to make up for their lack of straight-line speed. But they may have pushed it too far, as team principal Mattia Binotto admitted they’ve been unable to make their tyres work properly. Nonetheless, they were behind engine customers Alfa Romeo on Friday, a situation which will surely be reversed tomorrow, sparing them the ignominy of a Q1 exit.