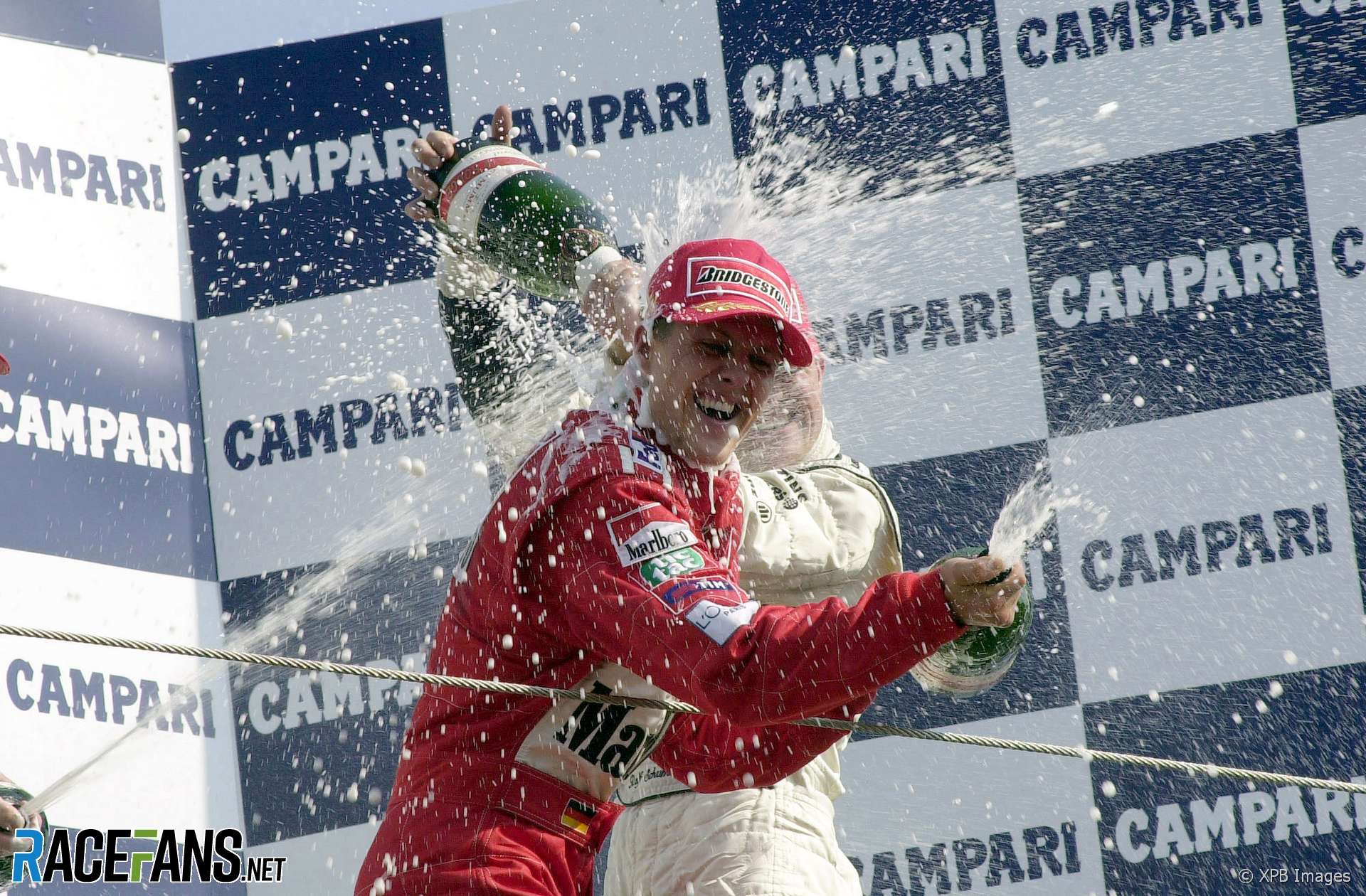 With four races left in the 2000 season, following his spectacular victory at the last round in Belgium, it seemed as if all the momentum was with championship leader Mika Hakkinen as he chased his third title in succession.

Ferrari’s Michael Schumacher had started the season with three wins on the bounce, but hadn’t won since Canada was now six points adrift. The second McLaren, in the hands of David Coulthard, was third in the standings, but increasingly in the shadow of his rejuvenated team mate.

Ferrari’s second home race of the year at Monza was the perfect opportunity for Schumacher to bounce back, with an expectant tifosi clamouring for a red win.

The circuit had been significantly altered. The old double chicane at Rettifilio was replaced by a new, much slower corner. The following chicane, della Roggia, had also been profiled. But it was the first corner which prompted concerns about the increased risk of early race incidents as a full field hammered towards it nearing top speed.

Before the race weekend began, as was traditional, the teams had a four day test session. Giancarlo Fisichella and Gaston Mazzacane both suffered major crashes at Ascari, the former requiring a hospital trip to examine a banged-up ankle.

The practice sessions were a Ferrari benefit with Rubens Barrichello going fastest on Friday, before Schumacher took over on Saturday. The McLarens were consistently in the mix but so too were both Williams, retaining their Spa form, and the Jordans.

Schumacher gave the Ferrari faithful plenty to cheer about with his sixth pole position of the season. Crucially, for the first time all year, Barrichello joined him on the front row, just 0.027s slower.

Championship leader Hakkinen qualified third having suffered with misfires on his Mercedes V10. An impressive performance from Jacques Villeneuve saw the BAR up in a season-best fourth ahead of Coulthard and Trulli on the third row.

It was a relatively disappointing qualifying session for Williams with Ralf Schumacher in seventh and Jenson Button in 12th behind both Arrows. The two Prosts took the penultimate row, followed by the Minardi pair, of Marc Gene and the considerably slower Mazzacane.

Race day dawned warm and dry – perfect September conditions in front of a packed crowd. But events swiftly took a dire turn, and the scene was not the much-debated Rettifilio chicane, but the second braking zone.

Schumacher held his lead from pole position, heading a fast-starting Hakkinen who vaulted clear of Barrichello. But as they raced into the Roggia chicane chaos unfolded.

The Jordan pair Frentzen and Trulli collided, eventually collecting Barrichello and Coulthard. In the melee behind de la Rosa was flipped into the air after contact with Herbert.

Tragically, one front wheel was launched clear of the scene and struck a fire marshal Paolo Ghislimberti, who died from his injuries. Despite the magnitude of the incident, the race wasn’t stopped, instead continuing behind the Safety Car for 11 laps, a decision several drivers criticised.

When the restart was finally ordered more drama soon followed. Schumacher slowed the field to a near-stop on the approach to Parabolica. As the queue compressed behind him, Button swerved to avoid his team mate’s car and struck a barrier, retiring shortly after.

Schumacher immediately began to pull away from Hakkinen and Villeneuve and was soon a couple of seconds clear. On lap 14 the BAR gearbox put an end to Villeneuve’s race, promoted Ralf Schumacher to third.

Thereafter the top two remained stable with Schumacher retaining a small but safe buffer over Hakkinen, the order only briefly switching during the pit stop period.

There was a far better battle for third between the other Schumacher, Jos Verstappen in the Arrows and the remaining BAR of Ricardo Zonta. The order switched throughout the afternoon, initially prompted by an error from the Williams driver, with pit stop strategies also coming into play.

The Williams driver prevailed in the end, with Verstappen eventually coming home seven seconds back. Fifth place eventually went to Alexander Wurz (the early crash giving irregular points scorers the chance to get on the board), and sixth went to Zonta who enjoyed arguably one of the best drives of his F1 career.

Schumacher’s victory was his sixth of the season and the 41st of his career, matching Ayrton Senna’s wins total. On an emotional day, Schumacher was moved to tears when asked in the post race press conference about the significance of the achievement.

It was also an important victory in the title fight. Second place for Hakkinen meant that he retained the lead but his advantage was just to two points, with 30 left to fight for.

But as F1 left Monza the championship fight second in importance to the day’s tragedy. In the wake of the incident the cars involved were impounded by Italian authorities, with the investigation eventually closed in June 2001.