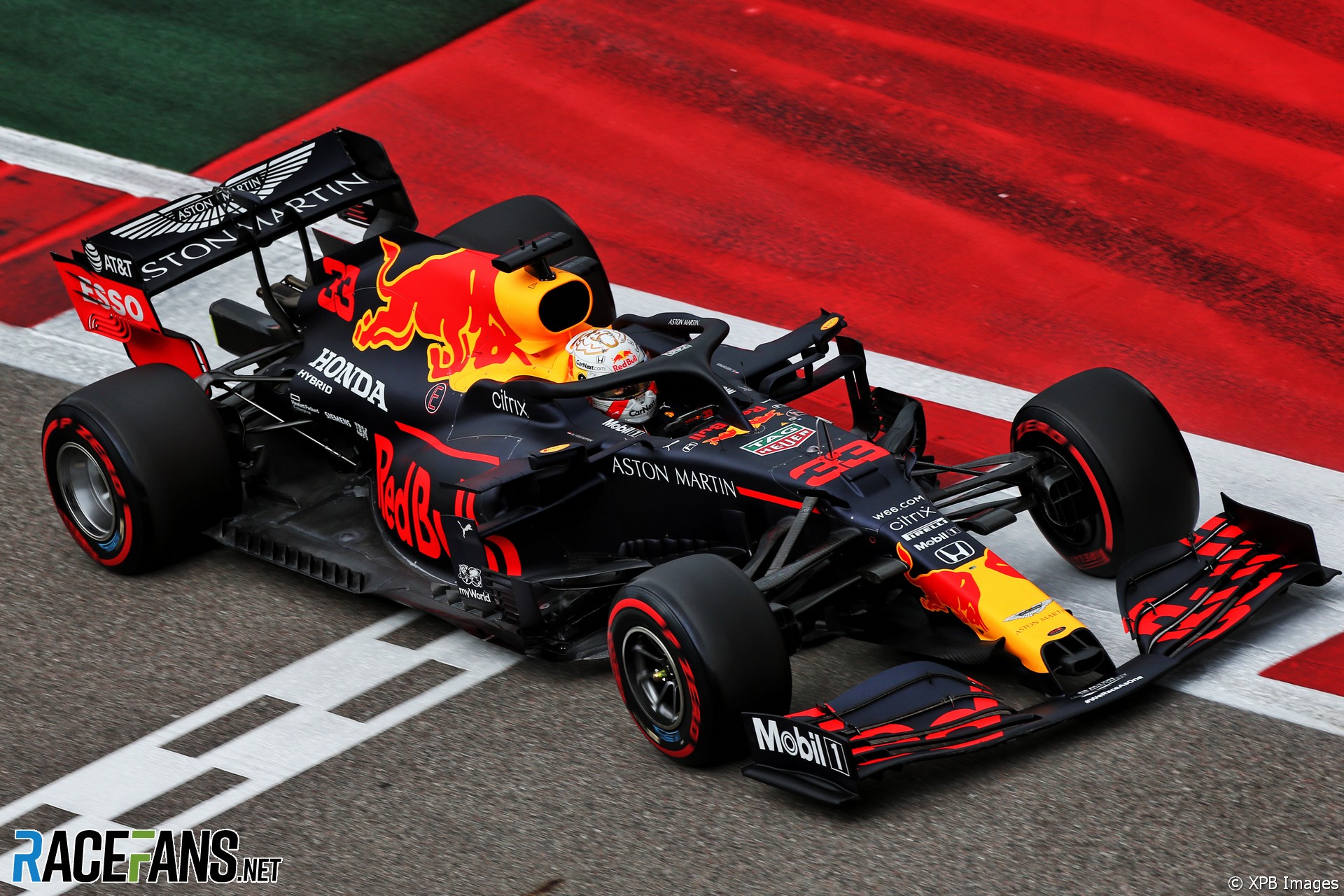 Verstappen was able to split the Mercedes in qualifying with what he called one of his best-ever laps. Cleverly, he positioned his car just close enough to Bottas ahead to pick up a slipstream at key parts of the lap.

Having also got through Q2 on the medium tyres – abandoning an extra soft-tyre run at the last second when it became clear it wasn’t needed – which gave him an advantage over Hamilton in the first stint. Starting on the dirty side of the grid, Verstappen was passed by Bottas on the run down to turn two but regained second place when Hamilton served his 10-second penalty.

Perez qualified on the second row of the grid while his team mate dropped out in Q2. Like Verstappen, he started on the dirty side of the track and lost places as a result, to both Renault drivers. But by pitting later than them he jumped from sixth to fourth.

For the rest of the race, he comfortably led the midfield and finished only eight seconds behind Hamilton. A fine performance under the circumstances, as he’s still waiting to be equipped with Racing Point’s latest upgrade.

Sainz’s weekend started on the wrong foot as he slid backwards into the barriers in first practice. This compromised his work on McLaren’s latest aerodynamic package, which team mate Lando Norris ran instead in the race.

Sainz recovered well in qualifying and started sixth. But at the start, he ran wide at turn two, and as he tried to take the path through the bollards he collided heavily with the barriers. That second crash in three days ended his race prematurely.

Vettel made it into Q2, but on a subsequent run carried too much speed into turn four, lost the rear end ended up in the barriers. As a result, he started 14th. From there he was unable to make up any significant ground in the race, and finished 13th behind the Ferrari customer pair Antonio Giovinazzi and Kevin Magnussen.

Albon’s typical qualifying deficit to Verstappen has been in the region of half a second, but at a track which Christian Horner said “accentuated” Red Bull’s tricky handling characteristics, it was more than twice that.

A gearbox penalty forced Albon to start from 15th on the grid, so during the early Safety Car period he swapped his set of soft tyres from Q2 for hards. He was unable to make sufficient progress on these by the time he pitted for medium tyres, which dropped him back into traffic. In the final stint he lost a place to Pierre Gasly, who was on fresher tyres, but was able to overcome Lando Norris’s McLaren for 10th.

Hamilton’s weekend veered off course in Q2 when he ran wide on his first attempt, then lost his second run due to the red flag for Vettel’s crash. He therefore had to qualify on the soft tyres which compromised his race strategy, but he still grabbed pole with a flawless lap at the end of qualifying.

Bottas had a cleaner qualifying session until Q3, when he lost out to Hamilton and Verstappen. Hamilton held on to the lead on lap one but a pair of five-second penalties for his pre-race practice starts left him behind, at which point his head seemed to drop. Bottas enjoyed a straightforward race following Hamilton’s penalty to score his second win of the season.

Daniel Ricciardo out-qualified his team mate but Esteban Ocon emerged ahead by the end of lap one. The latter maintained pace with the front runners for the first part of the opening stint, but Ricciardo was much quicker in the second stint and the team swapped their two drivers.

Although Charles Leclerc failed to make it into Q3 but he had benefit of starting from new tyres, which he used to good effect. On the opening lap, he sent Stroll into a spin – surprisingly, the stewards overlooked the incident. He gained two positions on the opening lap and continued on a 28-lap opening stint on the medium tyres. He came out of the pits in between the two Renault drivers and easily held off Ocon for Ferrari’s best finish since the 70th Anniversary Grand Prix last month.

Gasly started ahead of Kvyat but had to start the race on old tyres, which dropped him behind his team mate and Leclerc. During a late Virtual Safety Car period the team tried to pull off a quick pit stop, but were caught out when green flag running resumed earlier than expected, costing him two places. Nonetheless he re-passed Norris and Albon for ninth behind his team mate, who was hounding Ocon as the chequered flag fell.

Alfa Romeo struggled in qualifying and both drivers were eliminated in Q1, including Raikkonen who spun on his final run. Both drivers gained five positions on the opening lap but Giovinazzi’s 16-lap opening stint worked much better than Raikkonen’s longer run. Giovinazzi ended up just outside the points in 11th while Raikkonen was able to pass Norris in the final laps for 14th.

Stroll failed to make it into Q3 – he was already in the drop zone when his car overheated in the queue to leave the pits before the restart – but made up for it by positioning his car superbly on the run to turn two. But Leclerc tagged his right rear wheel at turn four, sending the RP20 into the barriers.

Haas pair Magnussen and Romain Grosjean also made impressive starts and were ninth and 10th respectively after the first lap. They lacked the car performance to maintain these positions but Magnussen was able to hold on to 12th as Grosjean dropped to 18th after making two stops.

Norris’s race was ruined on the first lap: He had to avoid his team mate’s crash and ran over debris which upset the balance of the car for the remainder of the race.

Russell put in another impressive qualifying performance that was good enough for 14th, but finished the race behind his team mate after three pit stops. He lost three places on the opening lap and struggled with tyres for the rest of the race, coming in last.