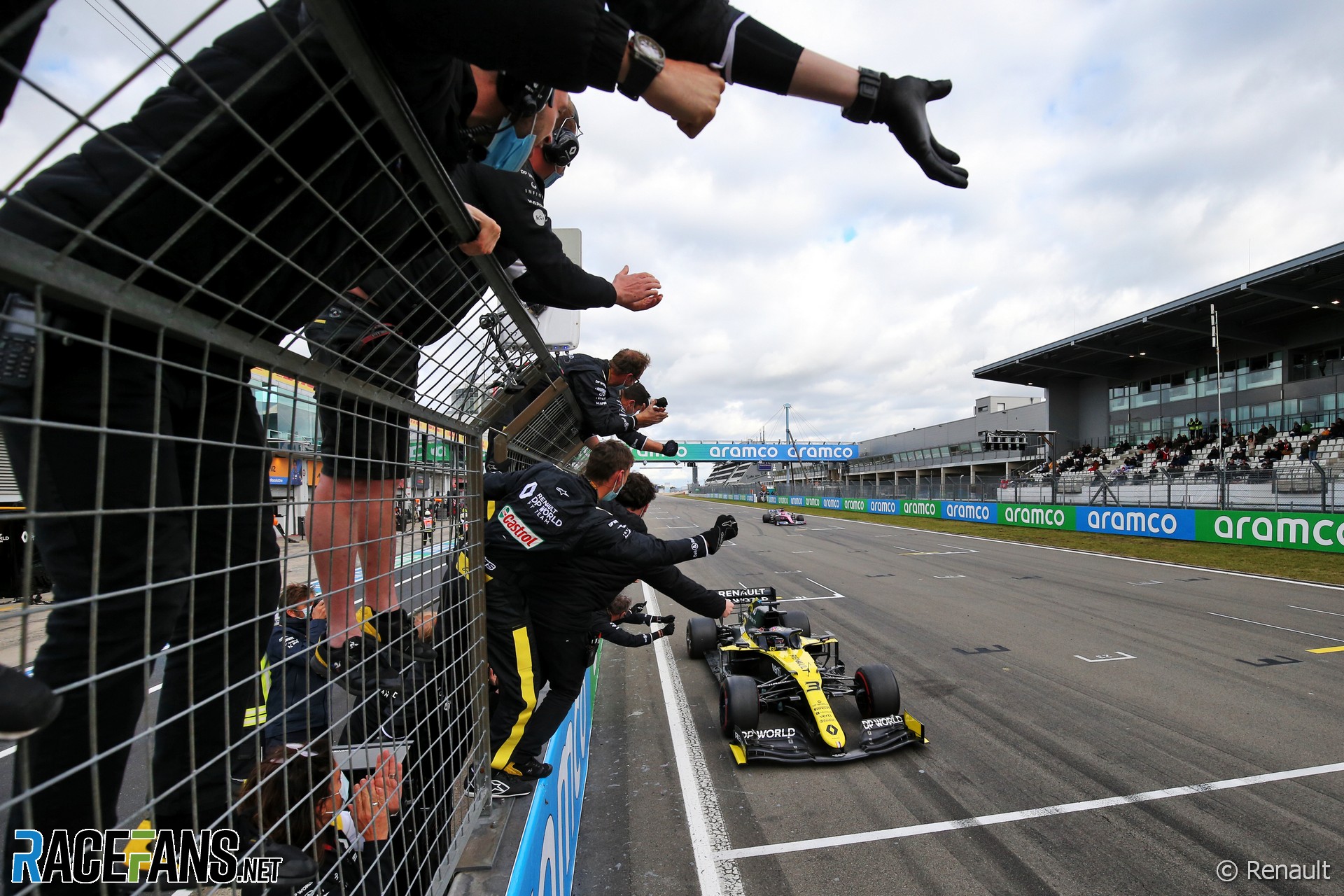 Renault’s F1 teams have a chequered history, and not always related to reaching the flag before their rivals.

The current operation can trace its roots back through previous identities of the team, though not quite all the way back to the first one. Renault as we know it today came into existence as home to Toleman before being acquired by Benetton in 1985, which sold to Renault 16 years later. The French company then sold out to Genii Capital in 2009 – in the wake of the race-fixing ‘Crashgate’ scandal – before the venture fund sold 90% back to Renault at the end of 2015.

Complicated? Somewhat, but that is far from the end of it, for the silver-black diamond operated its first F1 team from Viry-Châtillon outside Paris in the seventies. This was preceded by an exploratory project at Alpine’s factory in Dieppe, where the original A500 prototype F1 car was designed and built.

Once the A500 was up to speed, if not reliability (no easy task given its revolutionary 1.5-litre turbo engine was based on a F2/sports car engine when all others ran bespoke naturally aspirated three-litre V8s or V12s), Renault gave its official ‘works’ blessing for the 1977 season and ordered the black car, to be known as the RS01, to be painted yellow.

Even then there was confusion as to the team name. Some suggested Renault F1, others wanted to name it after either of Renault’s performance sub-brands, Alpine or Gordini. Another suggestion was to name it Alpine Renault-Gordini-Elf in deference to the chassis origins, the funding brand, origins of the engine and in honour of the fuel company which developed special turbo brews.

Fortunately that mouthful was swept aside. However in time the RS chassis nomenclature changed to RE, in honour of Elf’s contribution.

A case could be made that Renault has yo-yoed in and out as team owner and engine supplier more often than Honda but with markedly greater successes. Its chassis scored a pair of drivers and constructors titles in the noughties, and Renault engines powered four constructors champions – Williams (five), Benetton (one), Renault (two) and Red Bull (four) – to a total of 11 drives titles. Indeed, Renault lies second only to Ferrari in the all-time engine stakes.

Yet despite these historic successes, Sunday saw the team in a celebratory mood for the first time in almost a decade after (outgoing) driver Daniel Ricciardo claimed a fought-for podium at the Nürburgring in a race that was far from ‘normal’. Apart from the disruptions caused by Covid-19, Friday running was cancelled entirely due to low cloud, race day temperatures were in single-digits and even Mercedes lost a car due to technical problems.

Of course, in F1 one takes a podium any way they come, but clearly there was a deeper significance in this result. Not only because team boss Cyril Abiteboul and Ricciardo bet a tattoo on a podium finish this year – the former, who detests body art, will submit to needles for a design of the latter’s choosing – but because the entire team sees the result as proof that the team is on its way back after a five-year rebuilding period.

(One hopes for the Frenchman’s sake that he has a choice of not only location and size of the artwork but also of the studio, and that he finds one close to a laser removal specialist. That way Cyril may honour the bet without providing a visible trophy for his driver to continuously gloat over…)

Whatever, one glance at the results since Renault reacquired (for a notional pound) ‘Team Enstone’ at the end of 2015 shows that the trajectory is generally upwards: ninth in 2016, then sixth, fourth, fifth and currently fifth but just six points behind hated rival Racing Point (and its copied Mercedes tech) in third place and two points behind Renault-engined McLaren. Ferrari is over 30 points in arrears in sixth place.

Mention of Racing Point brings to mind the brake duct protest, and the dogged determination and meticulously prepared documentation Renault presented to the stewards provides ample proof of its ambitions. Clearly the team needs to be taken seriously, and will let nothing get into its way.

Since the acquisition the team has invested massively, with headcount moving from around 450 to 750, supplemented by a succession of facility upgrades and recruitment of F1 heavyweights Marcin Budkowski as executive director and Pat Fry (ex-Ferrari and -McLaren) as technical director. Indeed, such has been the commitment that it was no surprise that Renault signed up to the 2021-25 Concorde Agreement.

For the past two years the parent company hung in limbo after the 2018 arrest in Japan of Carlos Ghosn, the Nissan-Renault-Mitsubishi chairman and CEO. This left instability at boardroom level, where Ghosn’s sympathisers were shown the door and number crunchers took up the slack.

However in July Luca de Meo, a business ethics graduate whose CV lists progressively senior appointments at Renault, Toyota, Fiat/Alfa Romeo and Lancia, Volkswagen and Seat, slid his feet under Renault CEO desk. Among his first moves was to direct that Renault F1 Team rebrand to Alpine from 2021 – thus closing a circle that began in 1975. The engines won’t carry ‘Gordini’ badges, but the car’s livery will feature the tricolore.

De Meo has attended more races this (truncated) season than Ghosn did in a decade. The Italian’s presence no doubt galvanised the team, as such support tends to do. As Dieter Zetsche at Mercedes and Ferrari’s Luca de Montezemolo proved during their CEO tenures, there is seldom a greater motivator than interest from the top.

That said, in order to post top results even the best driver needs the right equipment. After Sunday’s race Ricciardo described the car as now being “complete”. Indeed, McLaren team principal Andreas Seidl, whose team currently runs Renault engines – swapping for Mercedes from next year – opined that Renault had recently found “two-tenths” over their orange car.

During a post-race media briefing in Germany Abiteboul called the car “a good rounder” but conceded it had some “corner entry stability” issues. He estimated they are still missing “one second or one percent to be on the podium on a regular basis”.

The RS20 was designed last year by a technical team directed by Nick Chester, who parted company with Renault in December. Fry, who joined in February this year shortly before pre-season testing, inherited the basic car. Abiteboul made it clear when I asked him about the restructuring on Sunday that he believes the team are only just beginning to feel its benefits.

“Yes I think so,” he said. “This year’s car is very much a product of the previous [technical] management.” Maybe so, but progress has certainly been made this year, for which Fry should at least partly be recognised…

“Yes, we have new people who will carry the team to the next level, but I believe we have yet to see the effect of the restructuring that we had last year.

“Next year’s car will be the first time that you can see that hopefully in action, and [the result] of some of the decisions we have taken this year; some of the ways we will be using the [development] tokens and so forth.

“But that is for next year. I hope it is only the beginning now that the restructure is in place.”

The crucial question is, of course: Is Renault – or Alpine as the team will soon be known – on course to win again? Abiteboul says the result give Renault “confidence that we are on the right trajectory to progress.”

“I feel that we can be now taken seriously, we are committed to the sport under Luca de Meo, we have a clear cut strategy and the team is progressing,” he adds, noting that the team has almost reached engine parity with Mercedes and that the chassis has taken a clear step.

However, Abiteboul concedes that, “Much more needs to come if we are win races on regular basis.”

One of those “much more to comes” is, of course, the return of Fernando Alonso to the team he won his 2005 and 2006 world titles with. The vacancy was created by Ricciardo’s pending defection to McLaren, whose signing by Renault in July 2018 had caused raised eyebrows across the grid when RaceFans revealed his departure from Red Bull.

As reported here, Abiteboul acknowledges Renault had “been questioned” over the timing of its decision to sign Ricciardo and the team’s subsequent failure to retain the Australian just as the project turns the corner after a five-year rebuilding period.

“The team wouldn’t be what it is today without Daniel, and maybe thanks also to the [disappointing] year that we had together last year,” he said at the Nürburgring. “[2019] was indeed a very painful year which has pushed all of us, probably starting with myself, to take the measures that we’ve taken.”

That said Alonso is, like all great champions, notorious for his impatience, plus his temperament has destroyed numerous relationships within teams. A statistic the Spaniard acknowledged with a broad grin when I relayed it to him two years ago is that every F1 team boss for whom he has driven was fired during his tenure, bar one – Paul Stoddard, who then owned Minardi, and was thus un-sackable…

It is too early to gauge whether the oft-prickly Alonso will fit seamlessly into the team he left twice before – in 2006 for McLaren, returning after a season, and in 2009 for Ferrari. Much has changed since then, not least the culture which had been instilled by Flavio Briatore – who remains Alonso’s manager, and who was held partly responsible by the FIA for ‘Crashgate’. Certainly, Alonso will tax the team’s patience, as he consistently did elsewhere.

That said, the prospect of the relentless Alonso going up against the impatient youth of Esteban Ocon in an identical car is compelling. If the two push each constructively the overall team can only benefit. That said, the key word is ‘if’, and one hopes that Abiteboul and his management are able to channel their complementary skills and obvious speed for the greater good of the team. Both are hard chargers.

All the building blocks seem to be in place for the team’s future success: An upward trajectory, a highly competent technical director who knows what it takes, perfect blend of experience and youth in the driver line-up, a committed CEO and, dare I say it, a team boss who seems a lot more comfortable in the role than when he accepted what could easily have been a poisoned chalice at end-2015.

‘One swallow doesn’t make a summer’ and a single podium does not a championship make. But both point to brighter times ahead, and these must now surely be on the horizon for ‘Team Enstone’, particularly in view of the levelling effects of the financial regulations and a more equitable revenue structure.

Whether the team again becomes a regular championship contender again is down to myriad factors which may or not come Enstone’s way. But just having the name Alpine genuinely in the podium mix would vindicate the struggles of the past five years. That kicked off in Germany on Sunday.