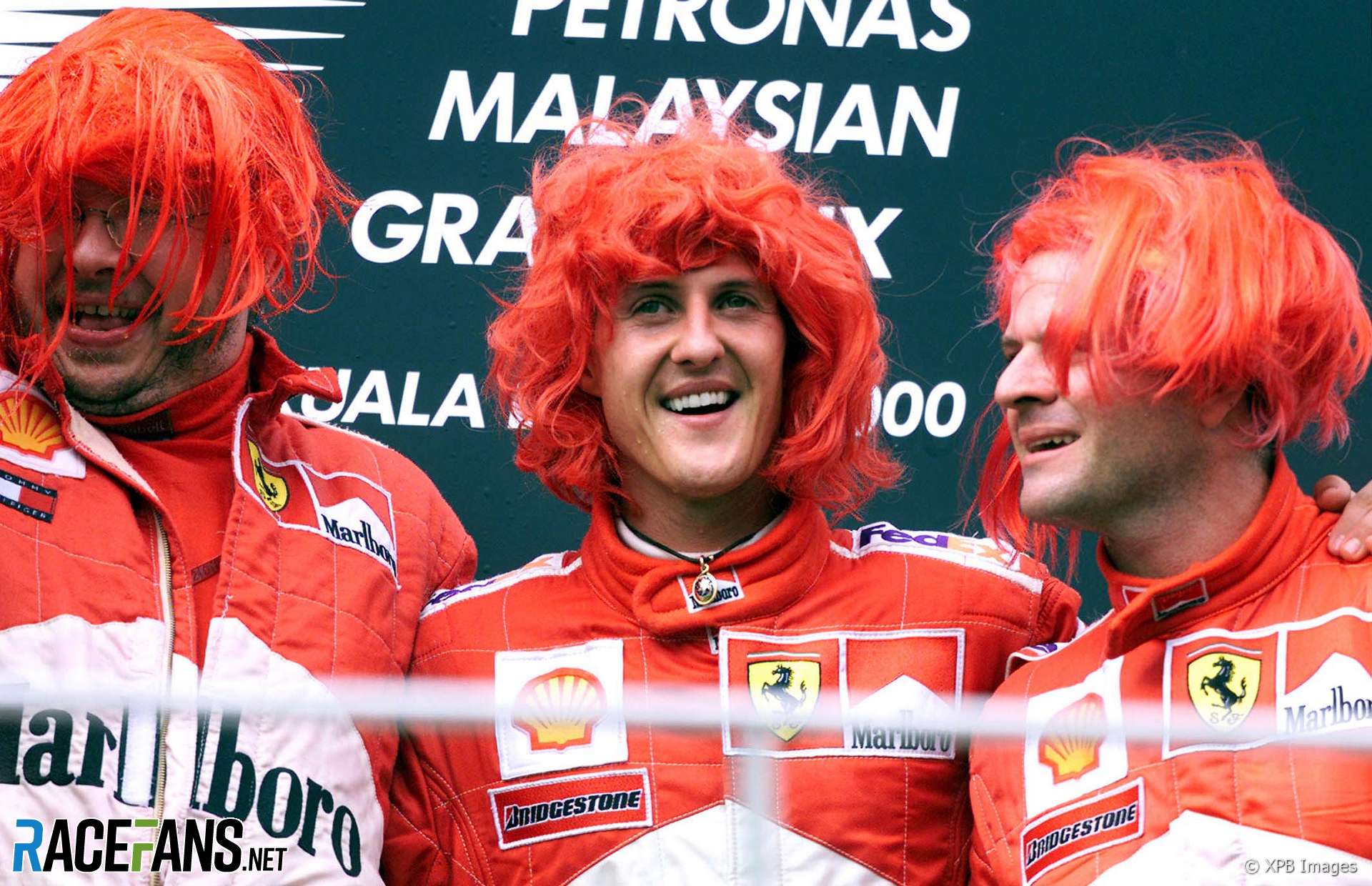 The 2000 Formula 1 season produced several moments which lingered in the memory: The bizarre race in Germany, the thrilling fight for victory in Belgium, and Michael Schumacher becoming the first world champion in a Ferrari for 21 years in Japan.

But the championship did not get the fitting conclusion it deserved at the final race in Malaysia. The Sepang circuit was holding its second grand prix and, for the only time in the championship’s history, the season finale.

Schumacher had won the drivers’ title but the constructors championship was still up for grabs. However within a few laps of the start that contest was as good as over.

The final race of the season was an occasion for farewells. Despite an impressive debut season for Williams, Jenson Button was making way for Juan Pablo Montoya. He would race on elsewhere and win the championship in 2009. But fellow British racer Johnny Herbert’s 12-year career was coming to an end at Jaguar.

Meanwhile Alexander Wurz was drawing the curtain on a difficult three-year spell at Benetton. However he seized the opportunity to drive the team’s sole special ‘qualifying car’, which team mate Giancarlo Fisichella had for once decided against using.

Also enjoying the latest-specification Renault hardware, Wurz planted his car fifth on the grid behind the usual pairs of McLarens and Ferraris. It was a timely reminder of his capabilities as he prepared to spend the coming season as McLaren’s test driver.

Schumacher, his third title freshly minted, wielded the Ferrari to superb effect in qualifying. He took his fourth pole position in a row and ninth of the season – more than every other driver combined – by almost half a second.

Team mate Rubens Barrichello could have joined him on the front row, but he was dismayed to see his time pipped by both McLarens in the dying seconds of the session, by less than four hundredths of a second.

The sixth row was shared by two drivers who were heading for the exit. Ricardo Zonta’s BAR drive was going to the man Wurz was replacing at McLaren: Olivier Panis. Herbert lined up for his final race in 12th.

Following an engine change, Button languished an uncharacteristically lowly 16th. Behind him the Sauber pair were separated by the two Prosts, while Marc Gene put in a creditable showing in his Minardi. The same couldn’t be said for Gaston Mazzacane, though his backing would ensure this wasn’t his final F1 start.

McLaren had been out-classed in qualifying, but the MP4-15s showed great pace once the race began. Unfortunately, both drivers squandered their chances soon after the red lights went out.

Hakkinen was first. Bizarrely, much as Coulthard had done four weeks earlier at Indianapolis, his McLaren twitched forwards before the lights change. Hakkinen thought he saw Schumacher move in his peripheral vision, but when the stewards reviewed the footage, they deemed the McLaren driver was the only one who has jumped the start.

By that time Hakkinen had already scampered into the lead and Coulthard had also pounced on Schumacher for second. Diniz, Heidfeld and De la Rosa all ended their seasons early by crashing into each other, leaving wheels bouncing around the exit of turn two and prompting an appearance by the Safety Car.

Soon after the race restarted Hakkinen allowed Coulthard by into the lead. This looked like a sensible move in retrospect, as Hakkinen’s car was fuelled much more heavily than Coulthard’s. But in short order Hakkinen also lost places to the two Ferrari drivers, which surely wasn’t in the McLaren plan. And then came the penalty which dropped him to the back of the field.

For the first dozen laps Coulthard controlled proceedings. He made good his escape, pulling over a second clear of Schumacher at times.

But McLaren’s hopes were dashed after a dozen laps. Coulthard ran wide at turn three, covering his tyres in dirt, some of which also went into his radiators. That prompted McLaren to bring him in early to clear sidepods – the high ambient temperatures at humidity at Sepang made cooling a major concern.

Coulthard was soon on his way, though he had surrendered some of the advantage his light fuel load was supposed to give him, and compromised his strategy. Schumacher ran much longer, and with the benefit of a lighter fuel load inevitably jumped ahead.

The cost to Coulthard of his compromised first stint became clear over the remainder of the race, as he closed in on Schumacher, but never looked likely to jump ahead. The pair crossed the line separated by less than a second.

With a Schumacher win looking likely from early in the race, there was little intrigue over the outcome of the constructors championship, as Ferrari only needed three points (equal to fourth place at the time) to put a lock on it. Barricello’s third-place car more than fulfilled that requirement, and meant he could celebrate on the podium with Schumacher and technical director Ross Brawn, the trio donning startlingly bright red wigs to celebrate Ferrari’s first championship double since 1979.

The team’s 10th constructors’ title was especially significant. It moved them ahead of Williams, making them the most successful team in the history of F1, a record they still hold.

Despite his early setback, Hakkinen’s car was quick enough for him to recover fourth place. Villeneuve put up a good fight, but was never going to contain a car which eventually finished over half a minute up the road. His two points for fifth meant BAR ended their second season in F1 an excellent fifth in the championship – a huge improvement on their embarrassing, point-less debut.

Jaguar, who as Stewart had finished fourth the year before, had the opposite experience. Irvine came in sixth, scoring only their second points finish of the the year, which was not enough to lift them above ninth.

Herbert’s final race came to painful end: A suspension failure threw his Jaguar into a wall. Ford must have been wondering at the wisdom of putting their performance brand into F1 as it ended its first season ahead of only Minardi and Prost, neither of which scored all year.

Jaguar had begun the season with bold aspirations of challenging Ferrari. But as the season ended, the Scuderia had swept all before them. As it transpired, it was only the beginning of an incredible period of dominance by Schumacher and Ferrari.