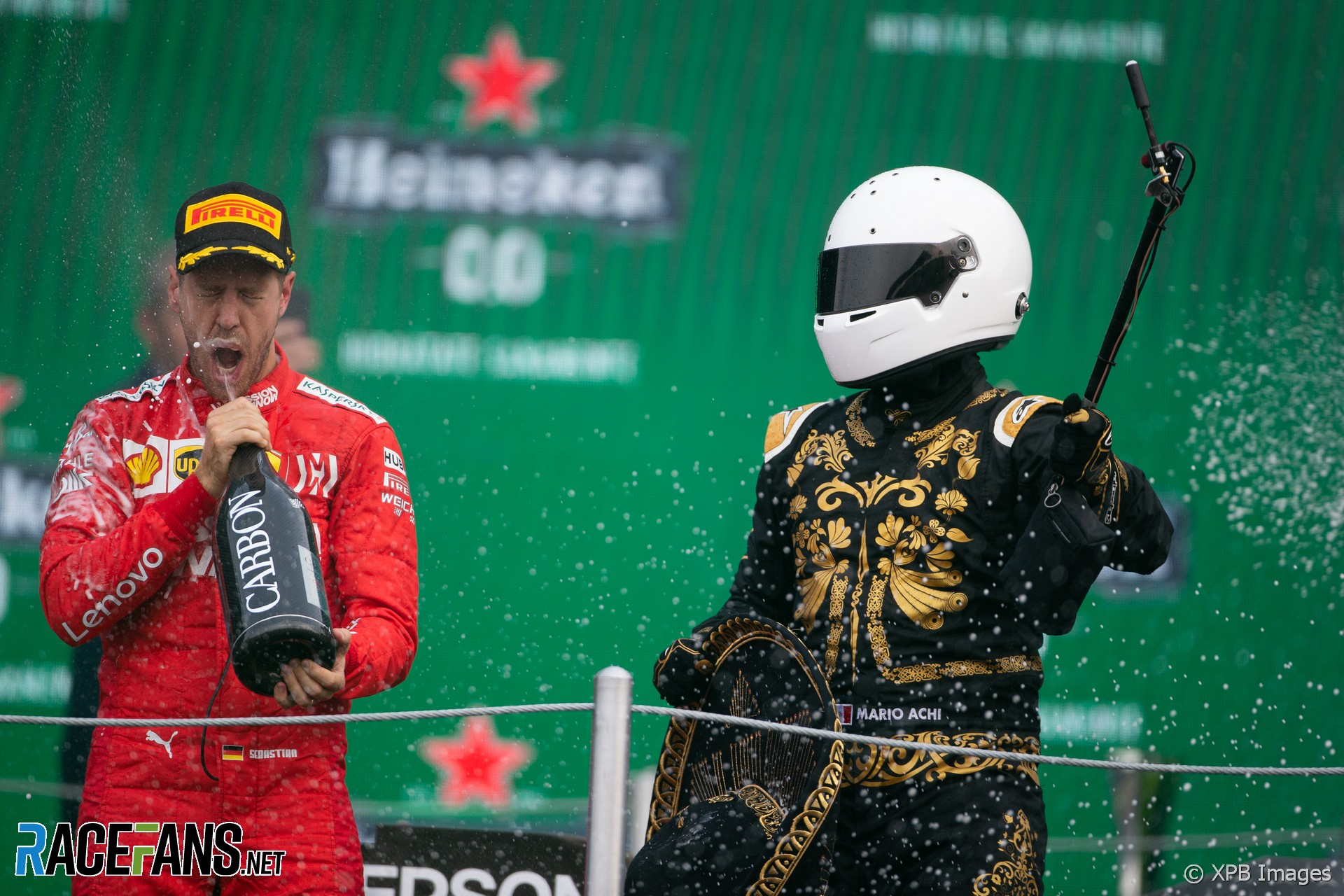 The Emilia-Romagna Grand Prix took the place of what should have been the Mexican Grand Prix on the 2020 F1 calendar.

At that race one year ago last weekend, an unimpressed Sebastian Vettel regarded his trophy for second place with dissatisfaction. “They’ve put so much effort into the race and then you get this shitty trophies that look boring,” he remarked.

But Vettel hasn’t had cause to worry about the quality of trophies he’s received since then, as he hasn’t won any more. Vettel’s 120th visit to the podium remains his most recent to date. During that time his team mate Charles Leclerc has taken three podium finishes.

Not since Vettel became a regular driver at the Hungarian Grand Prix in 2007 has he gone a full year without reaching the rostrum. Nor has he been close to one this year: Vettel hasn’t spent a single lap inside the top three places.

Mercedes continued to pile up the podium finishes – Imola was the 500th (and 501st) for a car powered by their engines. The team also scored their 100th victory of the V6 hybrid turbo era. Since the current engine formula was introduced in 2014, Mercedes have won 74.6% of all races.

Lewis Hamilton followed up his record-breaking 92nd career win with number 93. It was his ninth win of the season, meaning he can still improve on his personal best of 11 in a year and even equal the record of 13, jointly held by Vettel and Michael Schumacher.

His team mate Valtteri Bottas took his 15th pole position, which means there are now only 20 drivers in the sport’s history who have more poles than him. The only other non-champions are Rene Arnoux (18), Stirling Moss and Felipe Massa (both 16).

As covered yesterday, Mercedes clinched the constructors championship for the seventh year in a row, which is a record. It bears pointing out that their total of seven world titles might well be higher had the trophy been awarded prior to 1958, given they powered Juan Manuel Fangio to the drivers title in 1954 (partially) and 1955 (entirely).

Imola returned to the calendar following a 14-year absence and held its third different race. Best known for playing host to the ‘San Marino’ Grand Prix from 1981 to 2006 (the tiny republic is about an hour’s drive from the circuit), it also held the Italian Grand Prix in 1980.

The Emilia-Romagna Grand Prix was the 100th round of the world championship to take place in Italy. Monza has held 70 of those races, Imola 28, plus one each at Mugello (this year) and Pescara (1957). No other country has held more grands prix.

Following the races at Monza and Mugello in September, this is only the second time in the history of the world championship that one country has held three races in a single year. In 1982 F1 visited Detroit, Long Beach and Las Vegas in the USA. On both those occasions a single driver enjoyed a trio of home races: Antonio Giovinazzi this year, Eddie Cheever previously.

Max Verstappen will presumably be pleased to race somewhere else, though: He retired from all three Italian rounds.

Have you spotted any other interesting stats and facts from the Emilia-Romagna Grand Prix? Share them in the comments.