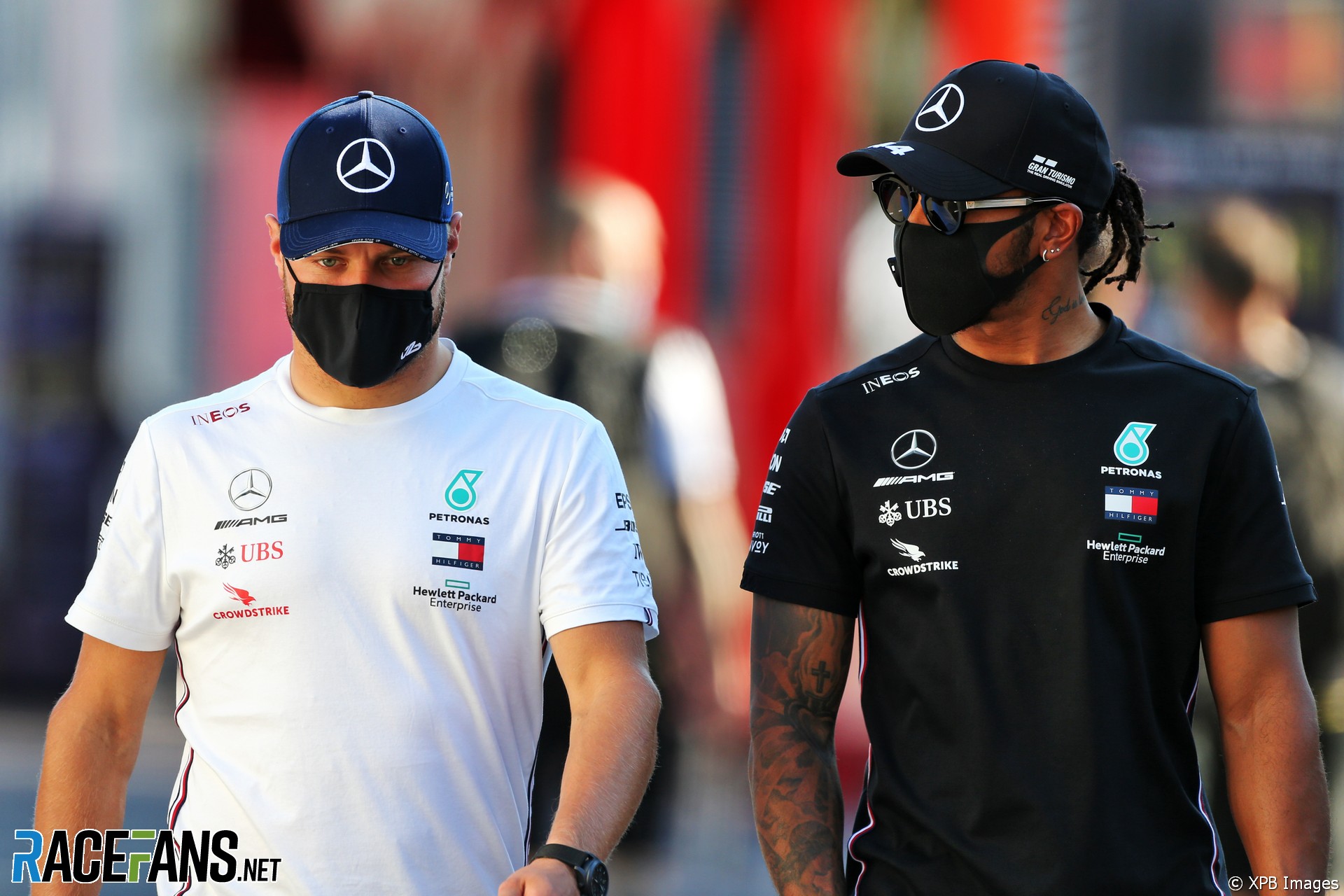 Lewis Hamilton recently claimed his team mate Valtteri Bottas doesn’t get enough credit for how competitive a rival he is.

But one of Hamilton’s former team mates disagrees. Jenson Button believes Bottas could be pushing him harder in races.

Hamilton and Button were team mates at McLaren for three seasons, from 2010 to 2012. Button said during that time they were more closely matched in races than in qualifying.

“He beat me in qualifying,” recalled Button in an interview for The Collecting Cars Podcast. “He won more races than me. But I think I won eight, races, he won 10 races, so it was pretty close.

“We had a lot of great races in our time together. For me, he was quicker than me in qualifying. I out-qualified him a few times, but nothing like he did with me.

“But in the race, that’s when I would come into my own, and I knew how to work the cars, work the tyres, work the strategy, in mixed conditions especially. So I loved our fights. It was sad when he left the team, it really was.”

Button, who last raced in F1 three years ago, believes other drivers would put Hamilton under greater pressure if they had Bottas’s car.

“Lewis is a different Lewis to what I knew,” he said. “Lewis when I knew him was lightning quick in qualifying. Like Valtteri can do.

“But in the race, he was quick, and sometimes he could get one over on you, but a lot of the time he’d make mistakes or he would not understand how to get from A to B as quick as possible. He’d try and do every lap as fast as he could, and he would destroy tyres, he would over-use fuel, choose the wrong strategy.

Button considers Verstappen the quickest driver in terms of outright speed in F1 today, and one of the four leading drivers in the series. “I think him and Lewis are up there. I also think Charles Leclerc is with them at the moment. I think that Danny Ric[ciardo]’s with them. I think those four stand alone at the moment.”

Verstappen’s dominance at Red Bull has left the team weighing up a replacement for his team mate, Alexander Albon, for the second year in a row.

“I actually think that they’ve turned the corner with treating their young drivers,” he said. “Over the years they have been tough, especially with Gasly. I think with Albon they’ve realised they need to take it a bit easier and maybe work with him with engineering and try and get [him] up [to] speed.

“The biggest issue is he’s got the quickest driver in the world for outright speed as a team mate, whose also set the car up like he wants it, which is on the nose, very oversteery and no one else can drive it.”

129 comments on “Bottas is not pushing Hamilton as hard as Rosberg did, says Button”