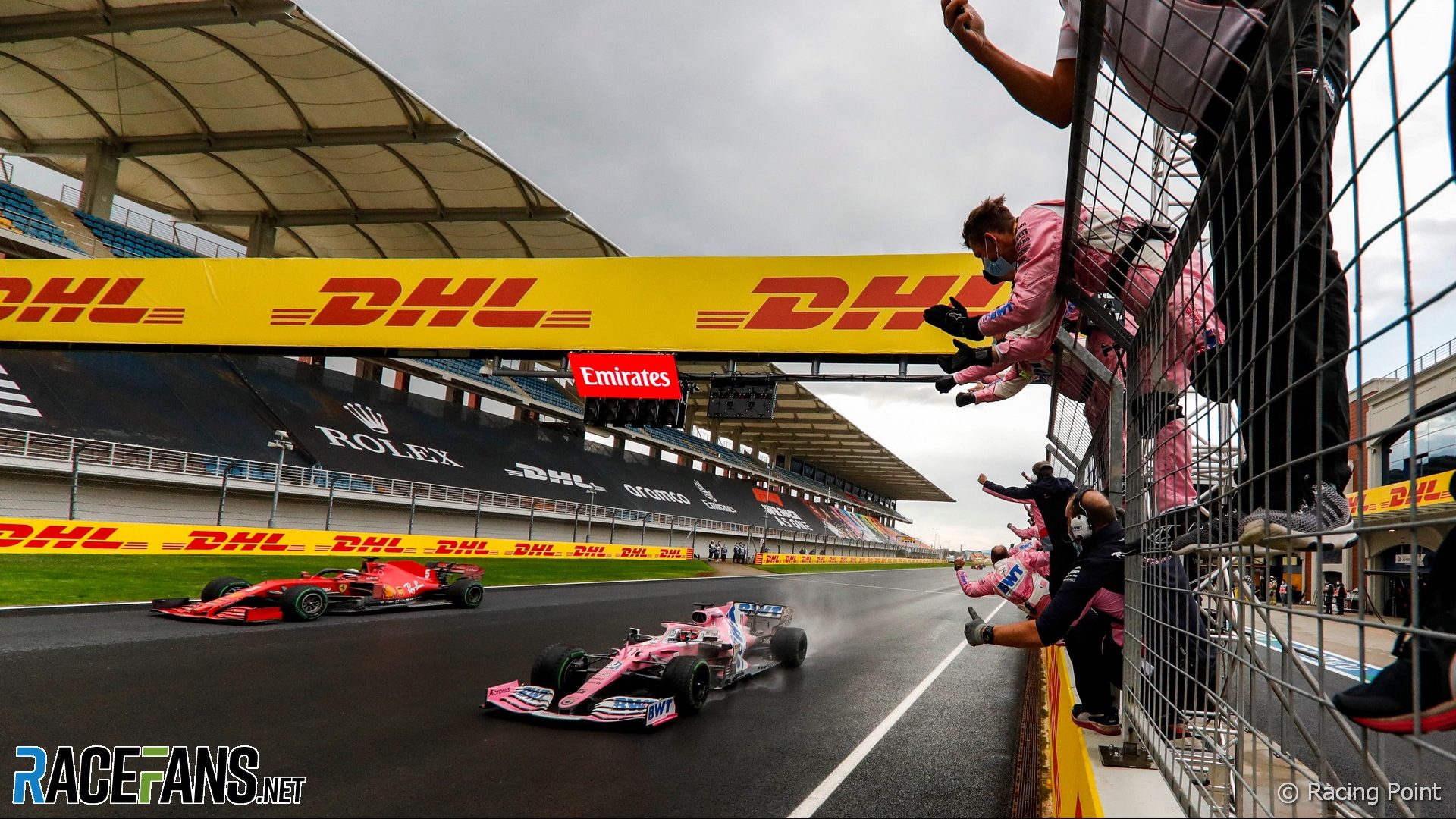 Both Racing Point drivers had strong weekends at Istanbul. Perez gets the nod for ‘star’ honours for a couple of reasons: He was first to suss out the team’s advantage on intermediate tyres in Q3, setting a lead followed by his team mate, but had the misfortune to encounter Antonio Giovinazzi on his final flying lap. That cost him a front-row start.

He made a virtue of patience in the race, however. Perez eased his intermediate tyres in at the beginning of what turned out to be his final stint, and they rewarded him by staying alive to the end of the race without graining. It’s doubtful he could have kept Lewis Hamilton behind once the Mercedes driver latched on to him with DRS, but he showed a cool head on the last lap when he re-passed Charles Leclerc for a fully deserved second place.

It’s a pity we don’t get to see Lewis Hamilton face this kind of adversity more often, as it tends to bring out the best in him. His performance wasn’t quite a “impeccable” as team principal Toto Wolff said after the race – he went wide on the first lap, losing several places – but from there on he had the blend of patience and speed vital to persevere in the uniquely challenging conditions. It was a day when several drivers could have won, and Hamilton once again prevailed.

Sebastian Vettel didn’t look as quick as his team mate, who reeled him in during the race. But he finished ahead thanks to a better qualifying performance, a superb start, and opportunistic last-lap re-pass. No wonder Charles Leclerc sounded fit to be tied on his radio afterwards.

After a disappointing qualifying session for McLaren – aggravated by a costly penalty – Carlos Sainz Jnr bounced back in the race with an unobtrusively superb drive to fifth place. A few pre-race tweaks aided his cause, and the McLaren driver led the Red Bull pair home at the chequered flag.

The grip-less conditions were hard on all concerned, but Nicholas Latifi seemed to struggle most of all with the conditions. He spun off in qualifying and while his team mate made a decent fist of starting the race on intermediates, Latifi simply plummeted like a stone.

While Kevin Magnussen was on the outskirts of the points, the other Haas was never in contention. The pair were separated by over half a minute at half-distance, following which Magnussen’s race was spoiled by an error at his pit stop.

Six spins in one race doesn’t quite say it all. Valtteri Bottas’s day was spoiled by damage, though it was incurred when he hit Esteban Ocon halfway around the first lap. His car was still quick enough to set the second-fastest lap of the race, as well.

Leclerc was understandably frustrated with himself though fourth place was a good recovery following a gamble on an early pit stop which left him 19th.

Both the Red Bull drivers made mistakes in a car which potentially had the speed to win the race. Max Verstappen was quickest in every session before Q3 and spun twice in the race. It later emerged an error in his front wing flap setting had caused a handling imbalance. Alexander Albon also spun, and followed his team mate home.

The Red Bull pair also had dreadful starts from the (even more) dirty side of the grid, which was also true of Lando Norris, though he recovered to finish eighth.

He passed Lance Stroll, who started from his first ever pole position and led convincingly. His team say his huge mid-race drop-off in pace was a consequence of front wing damage which was discovered afterwards. This was a noteworthy drive which shortened detractors should acknowledge.

It was a race of what might have been for the Renault drivers, who both made excellent starts, then tripped over each other at turn one. From there Ocon’s recovery driver to finish 11th behind his team mate was a credible performance.

AlphaTauri never got a grip on their cars in the foul conditions. Pierre Gasly had even more reason to be unhappy, as confusion over a power unit change on his car contributed to a grid penalty.

Antonio Giovinazzi compromised his build-up to the race by spinning off on his reconnaissance lap, then retired with a gearbox problem. But Kimi Raikkonen’s lowly 15th place indicated there wasn’t much to come from the Alfa Romeo in Turkey.

Magnussen deserved more following Haas’s pit stop error. George Russell also had a pre-race crash, and though he made a decent effort of starting the race on intermediate tyres, he dropped out of midfield contention as the track dried.