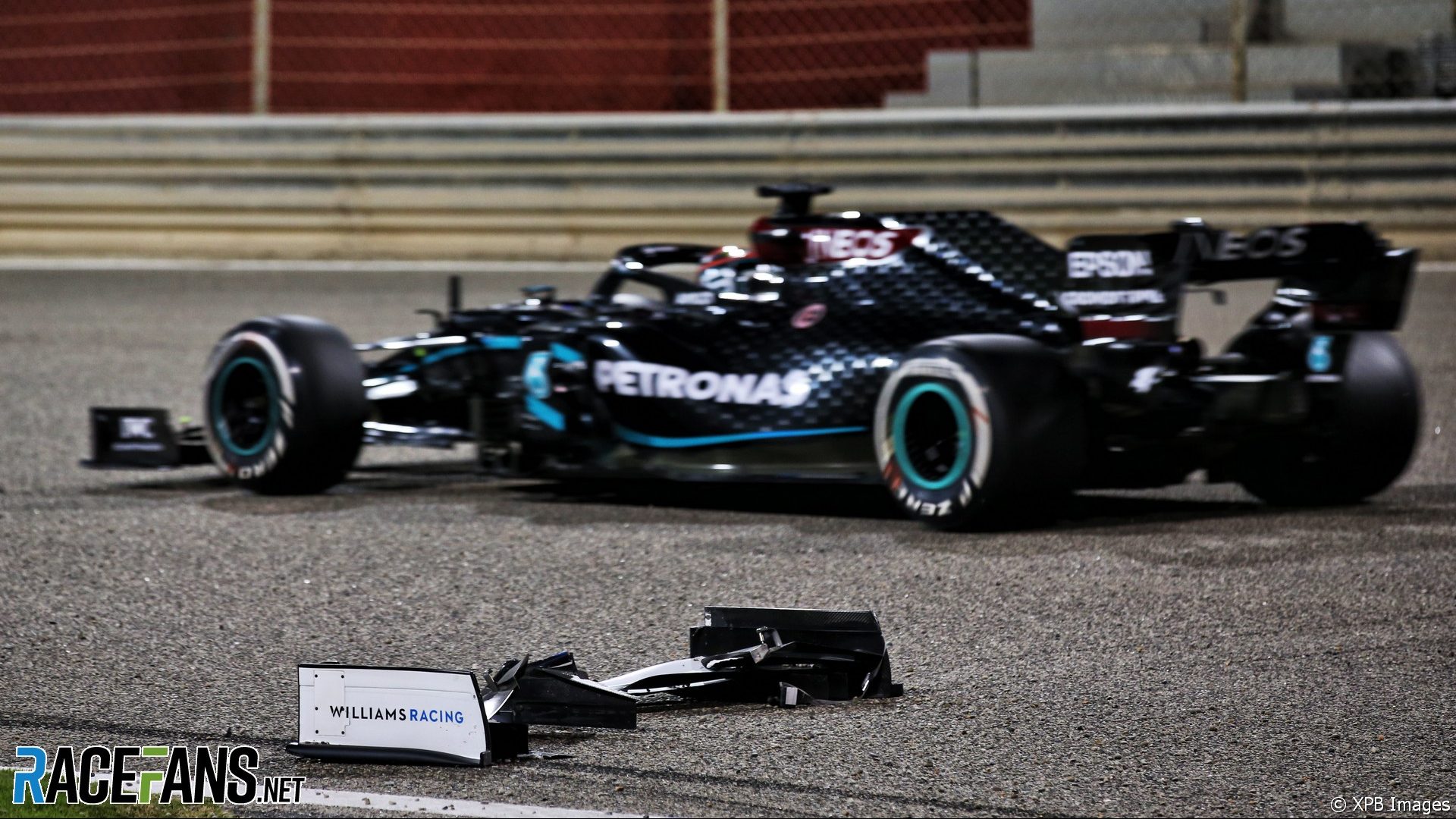 George Russell was two seconds away from avoiding the pit stop which cost him victory in the Sakhir Grand Prix.

The Mercedes driver, in his first race substituting for Lewis Hamilton, had led virtually all night until he came in during a Safety Car period on lap 62. However Mercedes’ plan to pit him and second-placed team mate Valtteri Bottas consecutively backfired horrible.

Russell was sent out of the pits with two of his team mate’s tyres fitted to his car – a breach of the rules. Mercedes discovered this when Bottas slid into the pit box, and hastily re-fitted his old tyres so he could be sent on his way with minimal time loss. Russell was summoned straight back into the pits to have his correct tyres fitted.

After the race Mercedes swiftly identified the “smoking gun” – not a wheel gun, but their radio system – which they blamed for the error. It also became clear Russell had come incredibly close to avoiding his doomed pit visit altogether. Indeed, most cruelly, his own presence of mind may have worked against him.

There was an unfortunate coincidence behind the Safety Car period which set in play the sequence of events which wrecked Russell’s race. It was triggered when Jack Aitken, his replacement at Williams, spun into a barrier at the final corner.

A Virtual Safety Car period was initially declared so that Aitken’s lost front wing could be retrieved. However because the cars were circulating so closely together around the short, 3.5-kilometre Bahrain Outer circuit, race control realised there wouldn’t be enough time for a marshal to safely retrieve the wing. The exposure of marshals to risk has been of heightened concern following near-misses in recent races.

The Safety Car was therefore sent out to bunch the field up and give the marshals more time to collect the wing and sweep other debris clear from the racing line. This call came just as Russell came out of the final corner with the pit lane entrance already in sight.

Mercedes therefore had very little time to react. Russell prompted them, asking if he was “staying out”, but was told repeatedly to “box”. The timing was incredibly tight. He was told the Safety Car had been deployed five seconds before he reached the pit lane entry line, and his pit stop was confirmed with two seconds to spare.

Russell, who has shown great awareness of the value of pitting under the Safety Car during his Williams days, visibly decreased his pace at this point, without which Mercedes might not have had enough time to call him in.

We saw further evidence of his presence of mind at Monza this year, when he was the only driver who spotted a signal indicating the pit lane entrance was closed without having first been warned about it by his team.

Mercedes committed a similar race-losing pit stop error on that occasion, as Hamilton failed to notice the same signal, and came into a closed pit lane. Yesterday Russell’s alertness to the opportunity to make a pit stop during a Safety Car period unfortunately cost him, and Mercedes had another mess on their hands:

As Russell entered the pits, confusion reigned at Mercedes. The FIA later investigated the team’s error in fitting the wrong tyres to Russell’s car, and confirmed the driver’s own radio message inadvertently contributed to it.

“Car 63 [Russell] was fitted with front tyres that were allocated to car 77 [Bottas]” they noted. “This was caused by a radio communications technical issue wherein the pit wall’s communication to the pit crew that car 63 was entering the pits prior to (and not after) car 77, failed to be received by the crew of car 63 because at the same time, the driver of car 63 transmitted over the top of that message.”

The instruction to the pit crew to prepare Russell’s tyres was given by the team’s sporting director Ron Meadows. Mercedes’ trackside engineering director Andrew Shovlin confirmed Meadows’ message to the team hadn’t been heard by the entire pit crew because of a delay in their radio system.

“We haven’t had enough time to get to get absolute and thorough understanding of what went on,” Shovlin explained yesterday evening, “but we have found a smoking gun.”

“That has to do with how the radio system prioritises messages when, for instance, Ron is calling out the crews and getting them to get the tyres ready for the two drivers.

“There were a number of broadcasts at that time on the radio system. The system knows to prioritise the messages coming from Ron because the most important thing is the tyres are there, more so than whatever a driver says or whatever someone else in the crew might say.

“But it looks like there is a period whereby the system is deciding to let the prioritised message through and we missed a key bit of the broadcast such that half of the tyre collectors didn’t get the message and it looks like half of them did.”

Mercedes did not discover their error until Bottas arrived in the pit box a few seconds later. His crew reached for the front tyres from the medium compound set he was due to take, and realised they had already been fitted to Russell’s car.

Rather than waste time choosing and fitting another set, Mercedes opted to get Bottas back onto the track with minimum further delay. “We decided to re-fit the hard tyres that Valtteri had been on just to make sure we could get out of the box and go,” said Shovlin. Even so, he came out of the pits in fifth place.

But he was about to gain a position from Russell, who was now being told by Mercedes that he would have to make another pit stop.

Bottas was no more impressed than his new team mate about the developments which had turned Mercedes’ one-two into a four-five:

“The pit crew didn’t do anything wrong,” stated Shovlin. “It’s simply that when you lose these messages, it highlights that the system falls down. That’s the thing that we need to just focus on, the root cause.”

A further detail making the outcome even more painful for Mercedes was that neither driver actually needed to pit during the Safety Car period. However Shovlin said the team cannot dwell on hindsight.

“We could have gone to the end of the race,” he admitted. “And, in hindsight, you can say that if we’d stayed out, if we’d avoided the issue, that would have been brilliant.

“So it’s one where you can sort of say, in a sense, the stop was a precaution just to make sure we had the best tyres on the grid. It would have consolidated the lead of the race if we’d been able to perform it well. And we need to make sure in understanding it, like any other fault, you focus on the root cause, not all the other noise and chaos around it.

“With hindsight, if you could wind it back, it would have been great, we could have won the race on the tyres that we were on. But we have to be able to do these stops.”

Shovlin believes this “root cause” – the radio system fault – has been present for years. It was sheer misfortune that it manifested itself yesterday, on Russell’s debut for the team, while he was leading the race.

He has previously suggested Formula 1 could make coverage of the sport more entertaining by broadcasting the team’s internal pit wall discussions. Not for the first time this year he had reason to be grateful they don’t.