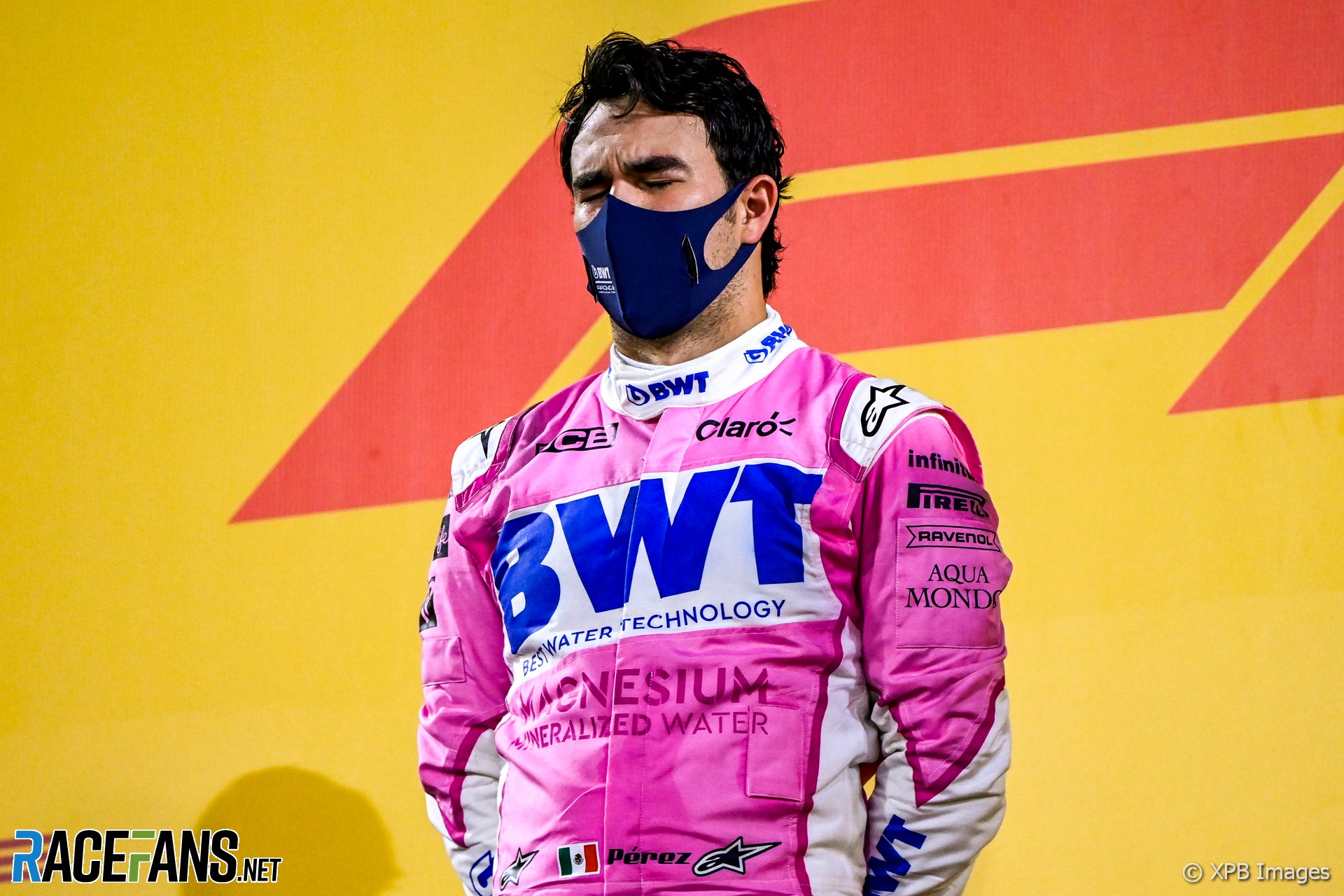 Sergio Perez set a new record by winning the Sakhir Grand Prix, having waited longer for his first victory than anyone in the history of the world championship.

The Racing Point driver’s first win came in his 190th start. He has taken the record from Mark Webber, who took his first win with Red Bull at the 2009 European Grand Prix, his 130th start. Perez is the seventh driver to log a century of starts before winning, joining Rubens Barrichello (124), Jarno Trulli (117), Jenson Button (113), Nico Rosberg (111) and Giancarlo Fisichella (110).

That maiden victory for Fisichella in the 2003 Brazilian Grand Prix was the last for the team we now know as Racing Point. It was the last win for Jordan, which subsequently became Midland, then Spyker, then Force India, and took on its current name at the beginning of last year.

It will rebrand again as Aston Martin for the 2021 F1 season. But with Perez out of the team after this weekend’s race, and without a contract for next year, he may have just scored his first win in his penultimate grand prix.

Perez is the second different driver to score their first victory this year, joining Pierre Gasly who triumphed at Monza. This is the first time we’ve had more than one new winner in a season since 2012, when Rosberg and Pastor Maldonado achieved their maiden wins.

There are now 110 different drivers to have won rounds of the world championship. Perez is the second race winner from Mexico. He joins two-times race winner Pedro Rodriguez, whose final victory came 50 years ago in F1’s last race on the original Spa-Francorchamps, in a BRM.

Rodriguez died the following year in a sportscar crash at the Norisring. The Autodromo Hermanos Rodriguez is named after him and his brother Ricardo, who also raced in F1 for Ferrari, but was killed in a non-championship race at the Mexican track in 1962.

You have to go back to when Emerson Fittipaldi won his final world championship, in 1974, for the last time F1 raced on a circuit with a lap time as short as Bahrain Outer. Niki Lauda’s pole position for that year’s French Grand Prix at Dijon, at a time of 58.79 seconds, held the record for the shortest officially-timed F1 lap.

That record now belongs to Valtteri Bottas, who took pole position with a lap of 53.377 seconds. That was half a second quicker than F1’s simulations predicted would be possible with three DRS zones, and only two were used. It was the 16th pole of his career, giving him as many as Stirling Moss and Felipe Massa.

Bottas ended George Russell’s streak of never being out-qualified by a team mate. He had emerged ahead in all of his 36 previous F1 appearances alongside Robert Kubica (2019) and Nicholas Latifi (2020).

Russell led an impressive 59 laps on Sunday. He has therefore led more laps this year than any other drivers besides the other two to have sat in a Mercedes: Lewis Hamilton (613) and Bottas (188). He also scored the first three points of his F1 career, though surely deserved much more.

Esteban Ocon was among those who benefitted from Russell’s misfortune, grabbing the first podium of his career with second place. This was also Renault’s best finish since Kubica finished second in the 2010 Australian Grand Prix.

At 87 laps, this was the longest race in terms of lap count since the 1973 season-opener in Argentina, held on January 28th at the Buenos Aires circuit. This was the second and final time this particular shortened, 3.345km version of the usual track was used, and the race ran for 96 laps.

Finally, despite having missed the penultimate race of the year, Hamilton is guaranteed to finish the year with a high points total than any of Mercedes’ rival teams.

Have you spotted any other interesting stats and facts from the Sakhir Grand Prix? Share them in the comments.