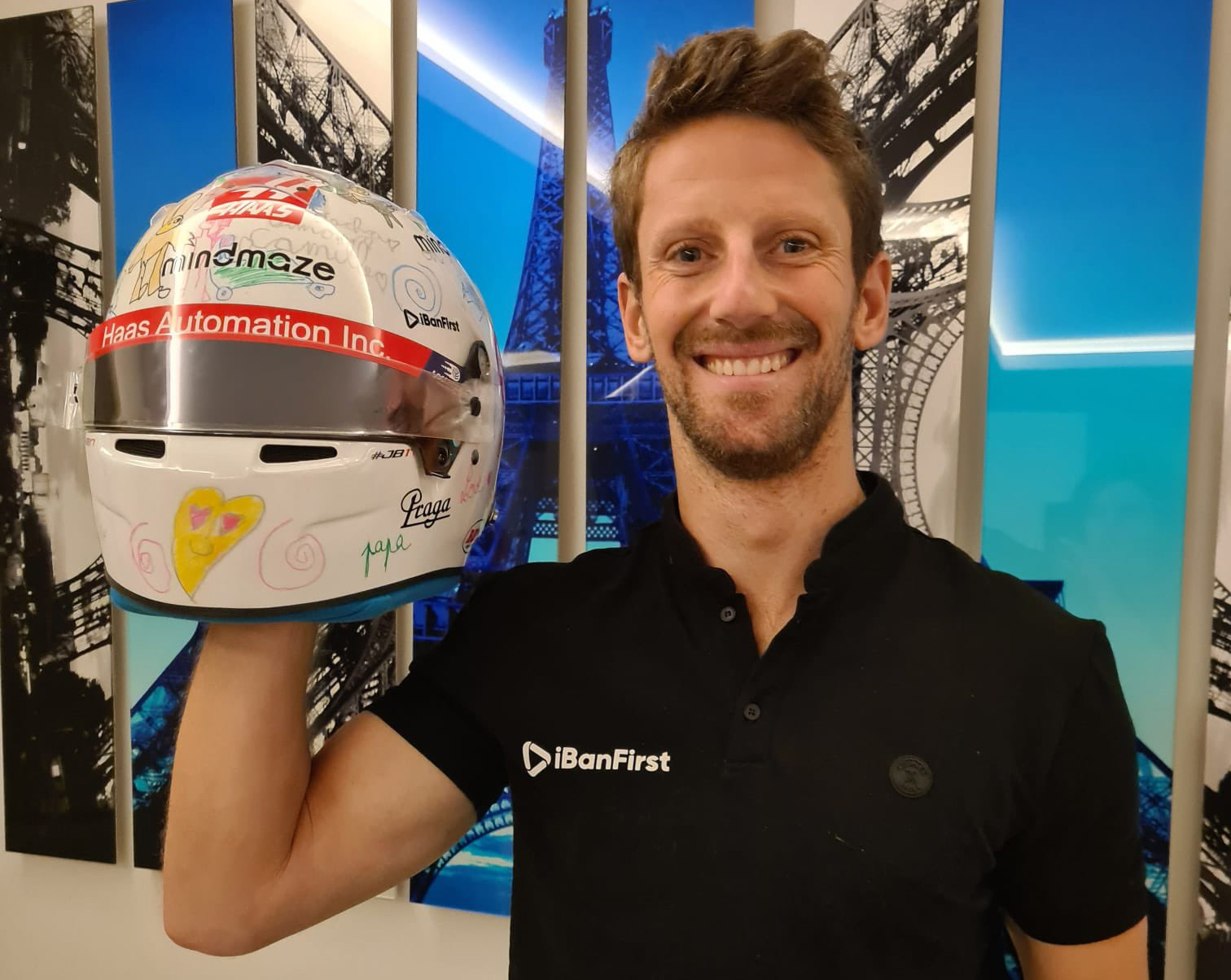 Romain Grosjean has revealed the helmet he intended to wear at his final Formula 1 race in Abu Dhabi this weekend, which he will miss due to the injuries he suffered in his Bahrain Grand Prix crash.

Other drivers who will be on the grid this weekend have revealed special designs for the final round of the year.

Grosjean has unveiled the helmet which was created for what would have been his final race in Formula 1, prior to his crash and injuries at the Bahrain Grand Prix.

Designed by his children, Sacha, Simon and Camille, it features their drawings of the Grosjean family, their pets, outlines of their hands and Grosjean in his race car.

It is destined to remain unused for the time being as Grosjean will not race at Yas Marina while he continues to recover from the burns he suffered to his hands. But he hopes to use it on a race track soon, describing it as “too beautiful to stay at home unused”.

After switching to a Schumacher-referencing red and turquoise design for his guest spot at Mercedes last weekend, George Russell’s return to Williams will be marked by a new, dark, all-blue helmet for the Abu Dhabi Grand Prix. Russell, who has previously run a red-white-and-blue helmet at Williams this year, has opted for a deep blue, matte version of his design for the final race of 2020.

Russell dedicated his helmet to Sir Frank and Claire Williams, the former owners of the team. “Thank you for all you’ve done for me, the team and the sport,” he wrote on social media. “Hope you like it.”

With Yuki Tsunoda expected to take his place at AlphaTauri next year, Daniil Kvyat may start his final F1 race this weekend.

He has updated his 2020 helmet design to be more reflective under the Abu Dhabi lights. The final race of the year starts in sunlight but will head into dusk.

The spotlights will illuminate Kvyat’s new glittered red panels, which replace the matte paint that he has used in the design all year.

Sebastian Vettel will end his six-year stint at Ferrari this weekend and is marking it with another variation of his white base helmet. Finished in reflected chrome to stand out under the night lights, it features the Ferrari Cavallino Rampante on its left side and Vettel’s number five opposite.

Charles Leclerc is paying tribute to his outgoing team mate with a helmet that matches Vettel’s design. Leclerc’s helmet is white with the twin stripes of the Monaco flag cutting across it, and the motto “Danke Seb” on top.

Grosjean isn’t the only driver who’s had a helmet created by those close to him. Valtteri Bottas’s partner Tiffany Cromwell created this rich blue design for his final race of 2020.

Carlos Sainz Jnr is saying farewell to McLaren this weekend so he’s added a picture of him and team mate Lando Norris and his crew to the back of his design.

In what could be has final Formula 1 race, last weekend’s winner Sergio Perez is sporting a helmet which lists notable statistics from his 10-year spell in the sport.

Finally, the seven-times champion has updated his helmet with a seventh star and gold detailing. Hamilton’s overalls also feature a nod to his record-equalling seventh title: His name is now spelled ‘Hamil7on’.