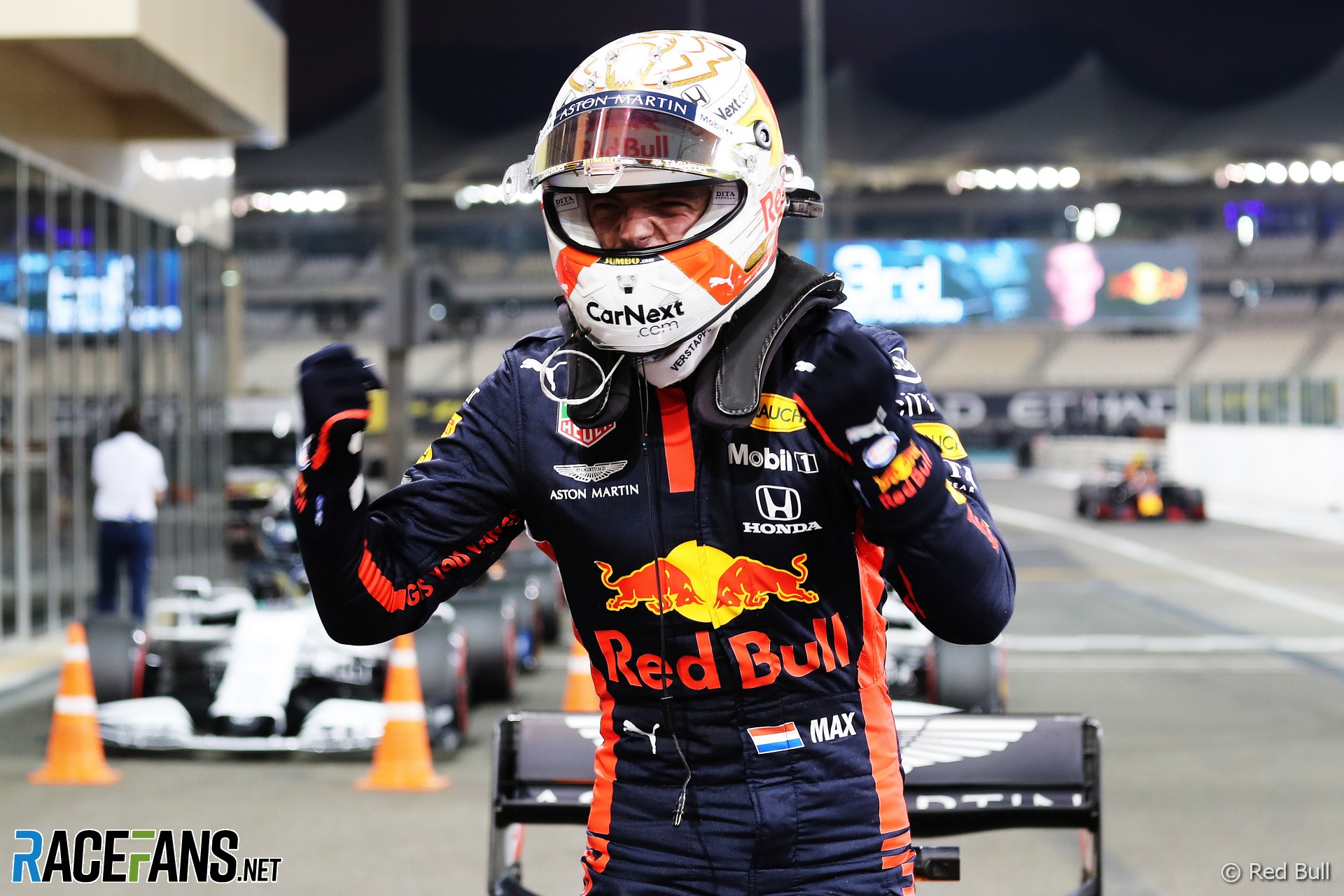 Valtteri Bottas was poised to deny Lewis Hamilton pole on his return by less than a tenth of a second. But Verstappen pulled off a remarkable final lap to deny Mercedes another sweep of the front row.

To begin with the Mercedes pair took up their usual places at the top of the times in Q1, Bottas ahead of Hamilton. But the latter’s lap time was deleted – he’s run wide at turn 20 and hit the kerb hard, his car bouncing into the air, and was judged to have exceeded track limits. He managed another lap but that left him eighth, nearly a second off his team mate.

The Red Bull pair were next, Alexander Albon four-tenths of a second off, and Max Verstappen unusually seven-tenths of a second slower than his team mate. Before starting his lap, Verstappen complained he’d damaged his tyres when Nicholas Latifi came out of the pit ahead of him. “I already have a flat spot because of the Williams guy sending the car out,” said Verstappen. “Unbelievable. What an idiot.” The stewards announced they would investigate the near-miss and summoned Williams over an alleged unsafe release.

Sergio Perez edged Albon out of second place and a series of other drivers relegated Verstappen further down the order. Not wishing to waste a new set of softs, he stuck with the same tyres for a further run, and produced a time good enough for second place.

George Russell had hopes of getting his Williams into Q2 again following a strong run in final practice. But he was only 18th ahead of the final runs, reporting his tyres were too hot, and requesting a rear wing settings change. He was held up before his final run when he was called to stop at the weigh bridge. Williams had him out in time to begin a last lap, but he missed the cut for Q2 by over half a second.

Having had his first lap time deleted, Antonio Giovinazzi pulled out a rapid final effort to grab a place in Q2, beat his team mate and secure a narrow win in the qualifying battle at Alfa Romeo. Raikkonen was almost half a second off his team mate in 16th, while the Haas and Williams drivers also went no further. Nicholas Latifi, who ended the session last, spun as he prepared to begin his final run.

Charles Leclerc moved up to third with his final run, relegating Verstappen to fourth, the Red Bull driver being compromised when his right hand got stuck in the side of his cockpit. Hamilton did a final run to put his progression to Q2 beyond doubt, and ended Q1 on top.

Mercedes and Renault put both their drivers on medium times at the start of Q2, hoping to reach the final stage of qualifying on them and bank a strategic advantage. Other teams split the decision between their drivers: As usual Verstappen was the only Red Bull driver on the harder tyre while at McLaren only Carlos Sainz Jnr, who had been unimpressed by the performance of the soft tyres yesterday, took the mediums.

Bottas edged Hamilton on their first runs, while Sainz was almost a second off the pace-setter. Lando Norris, on his softs, was half a second quicker. Albon initially split the pair on his soft tyre run, but the time was deleted for exceeding track limits. Surprisingly, Verstappen’s medium tyre time was no quicker than Sainz’s, putting him fifth.

Daniel Ricciardo also lost his medium tyre run to a track limits violation. With Sergio Perez, who will start at the back having exceeded his power unit allocation, not doing a lap, only a dozen cars set times initially. Racing Point briefly sent the Sakhir GP winner out to assess the track conditions and supply information for Lance Stroll’s next run. Esteban Ocon and Giovinazzi were the only drivers outside the top 10 initially.

Verstappen, who complained about a loss of tyre performance at the end of his lap, tried another run but stayed fifth, and was also called to the weigh bridge when he pitted. Back in the pits he immediately asked if there was another set of mediums available for another run, and told there was, had them fitted for his final run.

Leclerc also opted for mediums for his final run, and both he and Verstappen grabbed places in the final 10. In his final qualifying session for Ferrari, Sebastian Vettel failed to join his team mate in Q3, despite running soft tyres. “I gave it everything I had,” he said. “Copy-paste from Q1. No better, no worse.” Albon did manage to match Verstappen’s team to within a tenth of a second, though like Vettel he was on softer tyres than his team mate.

The first runs were close between not just three but, unusually. four drivers. Bottas was quickest, but Verstappen split the Mercedes, and Albon was just 15 hundredths off the pace setter.

In the final runs, Hamilton hit back with a 1’35.332 to go fastest. But Bottas – buoyed by a pre-run encouragement from team principal Toto Wolff to give “all you have, Valtteri” – edged his team mate off pole position, pipping him by six hundredths of a second.

But Verstappen, who for much of the season has followed the Mercedes pair to third place in qualifying – so much so he has lately joked he would keep the third place chair he’s repeatedly sat in on Saturday afternoon – had something left in reserve. Dead even with Bottas after the second sector, he dodged through the twisty final sector 25 thousandths of a second quicker than the Mercedes, and that made the difference for pole.

Albon couldn’t match his team mate’s improvement and lost out to Norris on his final run. Sainz put his McLaren sixth, losing the qualifying battle with his team mate, and was unhappy with his last effort. “Sorry for that I fucked up the chicane in turn eight, nine,” he told his team.

Daniil Kvyat continued his late-season upswing in form by taking seventh ahead of Stroll. “Good lap!” he enthused, “I enjoy this so much.” Leclerc took ninth, which will become 12th – still ahead of his team mate – after his three-place grid penalty from the last race.