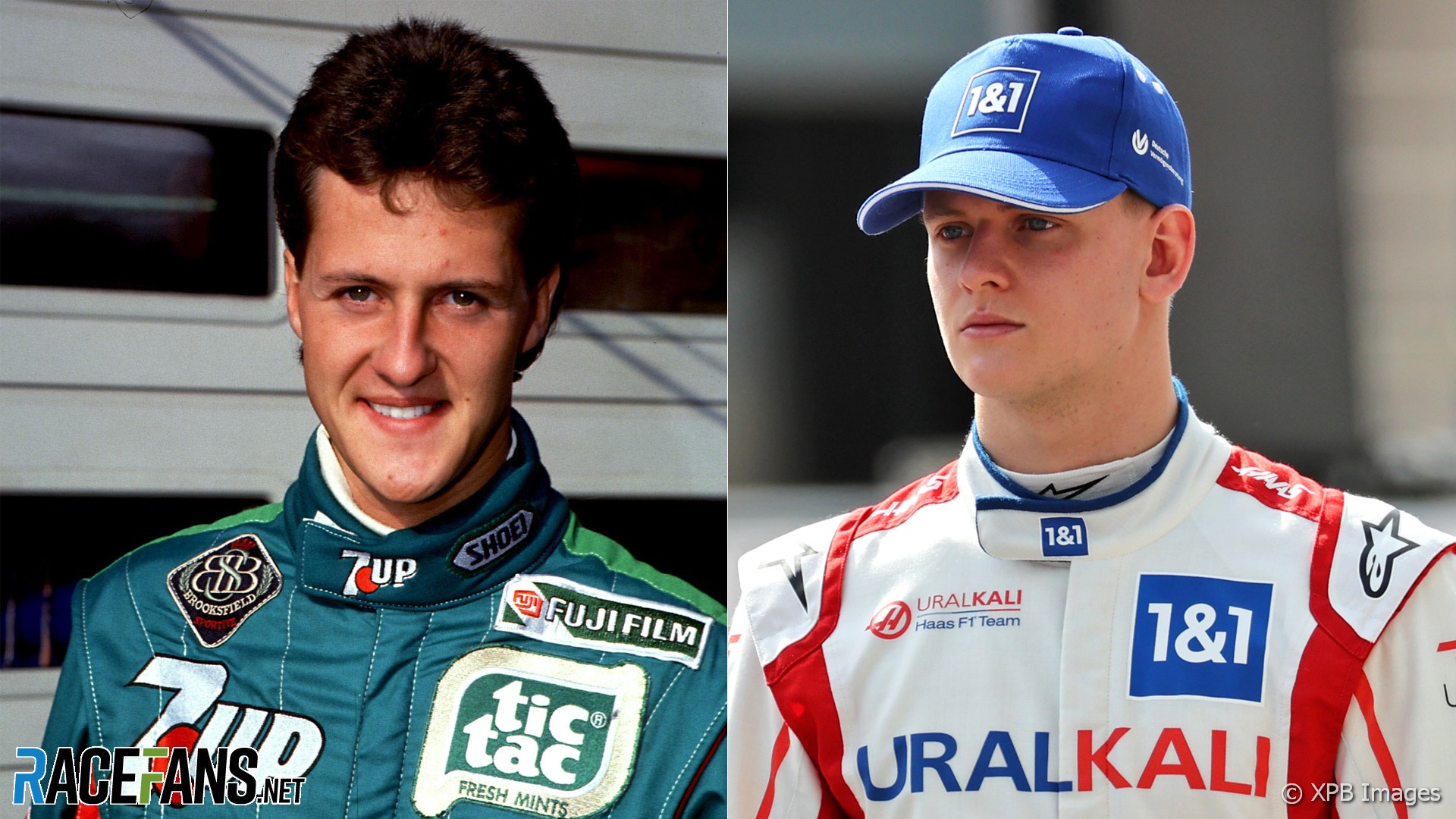 Had the 2021 F1 season started as intended in Australia last weekend, Mick Schumacher would have made his grand prix debut at the age of 21, and turned 22 the very next day.

The delay to the start of the season means he will instead start his first race aged 22, just as his father Michael Schumacher did at the Belgian Grand Prix in 1991.

That adds one of few points of similarity between the father and son’s pre-F1 careers, which have otherwise been very different. To an extent, this was always going to be inevitable: Mick Schumacher had the benefit of his father’s incomparably successful F1 career when he made his start in racing. But it also reflects changes to the structure of the championships beneath F1 over the past three decades.

Arguably, there are much stronger points of comparison between the early career of Michael Schumacher and that of the driver who went on to eclipse his achievements in F1: Lewis Hamilton.

Both came from humble backgrounds and lacked the budget to fund their karting careers. Anthony Hamilton worked multiple jobs to fund his son’s karting, while Schumacher attracted backing from local businessmen Gerd Noack and Jurgen Dilk. The latter, the father of one of Schumacher’s karting rivals, helped fund his move into Formula Ford, and agreed a deal with Schumacher under which Dilk would keep the trophies he won.

Having moved up from karts to cars, Schumacher’s abilities impressed a man who would become an extremely significant figure in his career: Willi Weber. Schumacher’s future manager spotted him tearing away from the field in a rain-lashed Formula Konig race at Austria’s Salzburgring in 1988, his first season after moving up from karts, and offered to fund his move into the significantly more expensive German Formula 3 series.

In that thrillingly close 1989 season, Schumacher won twice but finished third in the standings, tied with second-placed Heinz-Harald Frentzen and a point behind Karl Wendlinger. He returned the following year to clinch the title, though by then another significant development had occurred which seemed to offer a path into Formula 1.

In 1989 Mercedes’ sports car team boss Jochen Neerpasch announced his plans to form a junior team to promote young motor racing talents. It was not a new idea – Neerpasch had done something similar previously at BMW – but it was a fore-runner of the ubiquitous junior driver programmes seen throughout motor racing today. The trio who topped the German F3 standings that year were selected to join: Wendlinger, Frentzen – and Schumacher.

In a further parallel with Hamilton’s careeer, a decade later Mercedes also played a role in propelling him towards F1. Already backed by McLaren, Mercedes’ F1 engine clients at the time, the two collaborated on a joint project to place Hamilton and Nico Rosberg in the ‘Team MBM.com’ (Mercedes-Benz McLaren) karting squad.

Schumacher impressed with how quickly he adapted to the ferociously powerful five-litre twin-turbo C11, and its successor the C291, with its F1-style normally-aspirated 3.5-litre flat-12. Reliability problems with the latter throughout 1991 denied Schumacher a string of results, though he and team mate Wendlinger closed the season with victory at Japan’s Autopolis circuit.

By then, however, Schumacher was already a Formula 1 driver. Not with Mercedes – despite constant speculation they were planning an entry – but through a chance to substitute for Bertrand Gachot at Jordan following his arrest over an altercation with a taxi driver in London.

Schumacher was already a two-times world champion when his wife Corinna gave birth to Mick 15 days after the start of the 1999 season. While his father had to rely on the assistance of others to progress through the junior categories of motorsport until Mercedes came calling, for Mick his father’s huge fame meant he wanted for little in his karting career.

Indeed, the inevitable pressures associated with being the son of the most successful Formula 1 driver at the time meant the family initially shielded Mick from it, entering him for early races as ‘Mick Betsch’ (Corinna’s maiden name) and ‘Mick Junior’. But once he made the transition into single-seaters, this was no longer realistic.

By the time Mick Schumacher set out on his path to Formula 1, the route was more clearly formalised. His main focus in his first full season in cars was the FIA-sanctioned German F4 (ADAC) series. From there on the route was logical: After finishing runner-up to Joey Mawson in his second year in the series, Schumacher moved up to the FIA’s European F3 series, and from there on to F2 and now F1.

There’s an almost perfect uniformity to Schumacher’s progress to F1. He’s spent two years in each of the junior series, and only in F4 did he fail to deliver the title at his second attempt. He did, however, take second in both the German and Italian series with Prema, the crack junior squad he’s driven for ever since.

He won the F3 title for them in 2018 after going on a tear in the second half of the season, prompting speculation over just how strong the team’s engines were. Over the first 14 races Schumacher took 76 points and no wins; the last 16 races yielded 289 points and eight wins, an extraordinary turnaround.

Having been formally appointed to Ferrari’s Driver Academy in 2019, Schumacher moved into F2 that year. His rookie season was one of steady improvement, and included a breakthrough win in the sprint race at the Hungaroring.

Once more Schumacher visibly raised his game in his second year, and in a competitive season edged away at the head of the points standings with consistent podium finishes. Remarkably, this was achieved despite him never qualifying on the front row of the grid.

In 1991, Michael Schumacher’s arrival in F1 was a bolt from the blue. He hadn’t tested an F1 car until he sat in the Jordan at Silverstone, and he stunned onlookers by putting the car seventh on the grid for his debut at Spa.

“When Michael came on the scene in Formula 1 for the first time, he was explosive,” recalled Eddie Jordan, who had the bittersweet experience of giving Schumacher his debut, then immediately losing him to a rival team.

“I expect something similar from Mick. He’s very cool and calm, but he’s facing slightly different circumstances. With the greatest of respect, when Michael started it was with Jordan and we had a particularly good car that year, so it depends on what Haas is going to do.

“They’ve had some really difficult times in recent years, so it’s going to be a huge learning curve for Mick but we expect he’ll be the same as his father was, he will knuckle down, he’ll be hugely professional and he’s on a learning curve for greatness.”

In contrast to his father’s experience, Mick Schumacher’s progress to F1 has been the product of the modern motorsport age. His incremental journey up the FIA’s single-seater ladder makes his arrival at the top seem like an inevitability, though that does little justice to the graft he’s put in. The timely backing of a manufacturer and plentiful opportunities to test F1 hardware ensures he arrives considerably better prepared for his debut than his father was at the age of 22.

The Haas VF-21 is unlikely to prove as capable of springing a surprise as the Jordan 191 was. But for Mick, if he can make it more than a kilometre into his first race, he’ll have at least gone one better than his father did on his debut 30 years ago.

7 comments on “Michael and Mick Schumacher: Their different routes to Formula 1”