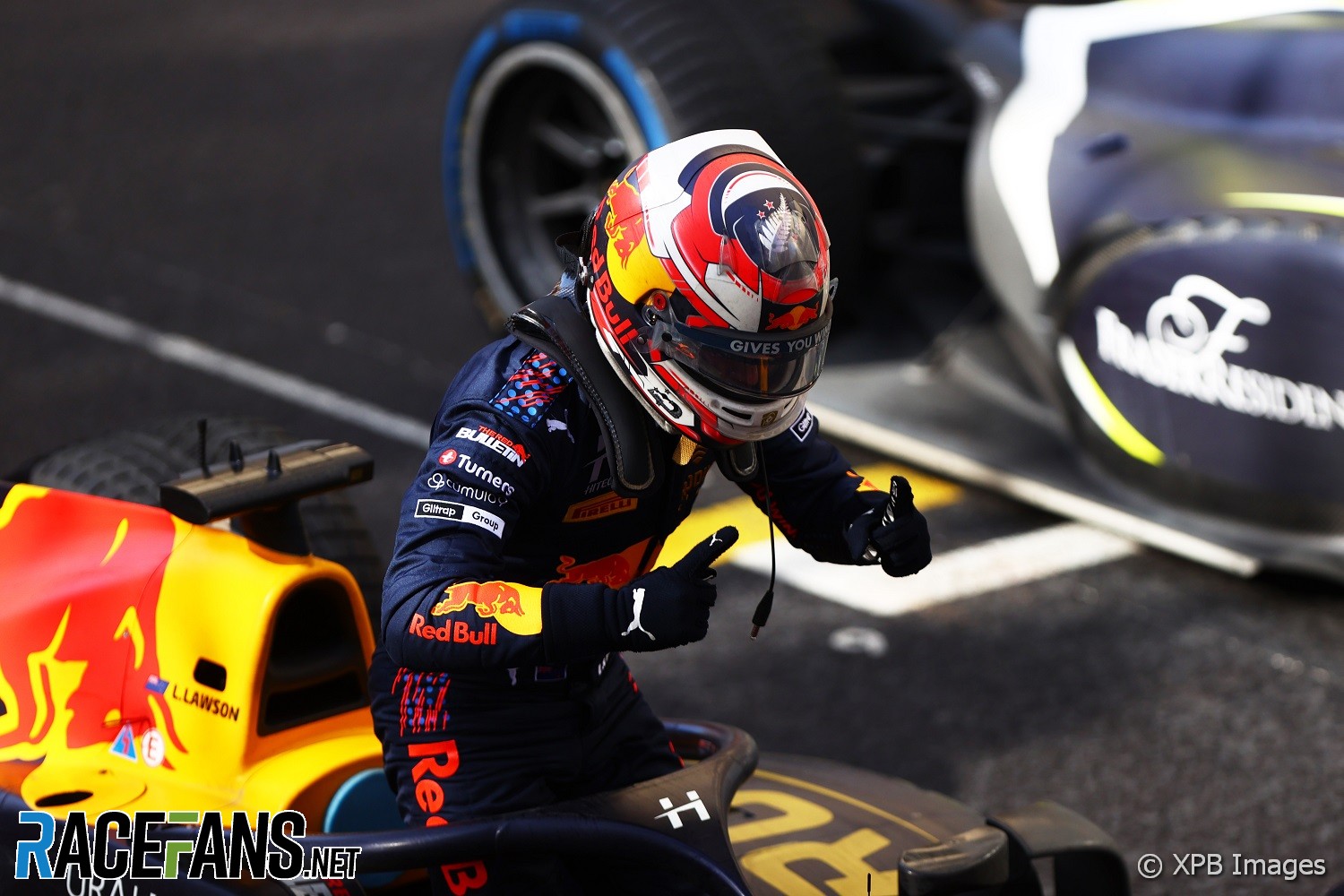 The Hitech driver mastered tricky conditions as the race began on a track made treacherous by overnight rain. He led home Dan Ticktum, who also passed Piastri, leaving the Prema driver to take the final podium place.

Having clinched pole position with a superb last-lap pass on Jehan Daruvala the day before, Marcus Armstrong wasn’t able to start there. The DAMS driver came to a stop at Rascasse on his way to the grid, and was pushed into the pits to start there.

That meant Lawson, second on the grid, effectively became the occupant of pole position. But Piastri immediately behind him found the third-place grid spot offered good grip – as Christian Lundgaard had the day before – and immediately fired past Lawson to take the lead when the start was given.

Piastri the field up the hill to Massenet, leaving only Gianluca Petecof behind. The Campos racer crashed out for the second day in a row after finding Marino Sato on the inside of him at Sainte Devote. The whole field started on wet weather tyres, including Armstrong in the pits, but his race soon ended as he parked up at the first corner after seemingly out-braking himself.

Bahrain winner Piastri was tentative on the damp surface, Lawson climbing all over his rear wing and third-placed Dan Ticktum paying close attention to the lead battle as well. Lawson looked poised to strike at Rascasse on lap five, but the Virtual Safety Car was deployed to aid the recovery of Armstrong’s car.

Soon after the race restarted, Lawson made his move on Piastri. He initially launched down the inside at the Nouvelle chicane, but both drivers failed to make the corner, and Piastri held his lead.

But only as far as Rascasse, where Lawson daringly made for the inside. The pair made it around the tightening right-hander with millimetres to spare, Lawson emerging ahead. He immediately sprinted away from his rival, leaving him two seconds behind in one lap.

Piastri now had Ticktum all over his rear wing, but the Prema driver found new confidence as the track conditions settled, and briefly traded fastest laps with Lawson.

Another VSC period was triggered when Sato became the latest driver to skid off at Sainte Devote. With the track drying out this prompted a gamble from the Virtuosi team, who put both their cars onto slicks.

Race one winner Guanyu Zhou was pulled in from ninth, while Felipe Drugovich pitted from 12th. The decision proved a disastrous error, both drivers immediately losing dozens of seconds per lap. Championship leader Zhou was swiftly back in for another set of wets.

A few laps after the restart Lawson cut the Nouvelle chicane but wasn’t troubled by the cars behind him. That soon changed, however.

Piastri’s lap times continued to fluctuate: On lap 14 he took the fastest lap again, but Ticktum was more than quick enough to keep up with him, and the next time around the Carlin driver made for the inside at the chicane and pinched second place.

Ticktum now closed on Lawson at around half a second per lap, and by the 20th tour of a scheduled 30 the pair were nose-to-tail. But on lap 21 Ticktum got slightly off-line at Massenet, ran onto the damp surface and lost around two seconds to his rival. With his tyres beginning to fade, he never recovered the time loss – until the Safety Car appeared.

On lap 25 Bent Viscaal rear-ended David Beckmann at Sainte Devote, the pair pirouetting to a halt. The quick attention of the Monaco marshals meant only a couple of laps behind the Safety Car were needed to restore order, but with the race nearing the end of its allotted time slot it became clear the full distance would not be completed.

The race resumed on the 27th lap with time for two final tours of the slippery circuit. Lawson handled Ticktum with ease at the restart, but behind them Piastri had a fight on his hands to hold onto third. Juri Vips had dispossessed Theo Pourchaire of fourth place shortly before the interruption, and the Hitech driver was making a concerted effort to claim the final podium spot. Piastri clung on, however, while Pourchaire stalked the pair of him.

Lawson completed a fine morning’s work by banging in the fastest lap on the final tour and taking the chequered flag a remarkable eight seconds before Ticktum after just two laps of green flag running. Piastri bagged the final rostrum place by less than half a second, Vips and Pourchaire behind.

Ralph Boschung took sixth having led a queue of rivals for much of the race. Roy Nissany threw away seventh when he clipped the wall at Sainte Devote, promoting Richard Verschoor. Lirim Zendeli, Jehan Daruvala and Jack Aitken completed the top 10.

Robert Shwartzman, who pitted for slick tyres before the restart, used them to his advantage and took the fastest lap from Lawson as he crossed the finishing line but as he didn’t finish in the top 10 he isn’t eligible for the accompanying bonus point. Viscaal was the only other driver to finish on the lead lap, Alessio Deledda having been lapped again.

Update: Lawson has been disqualified from the race due to a technical infringement