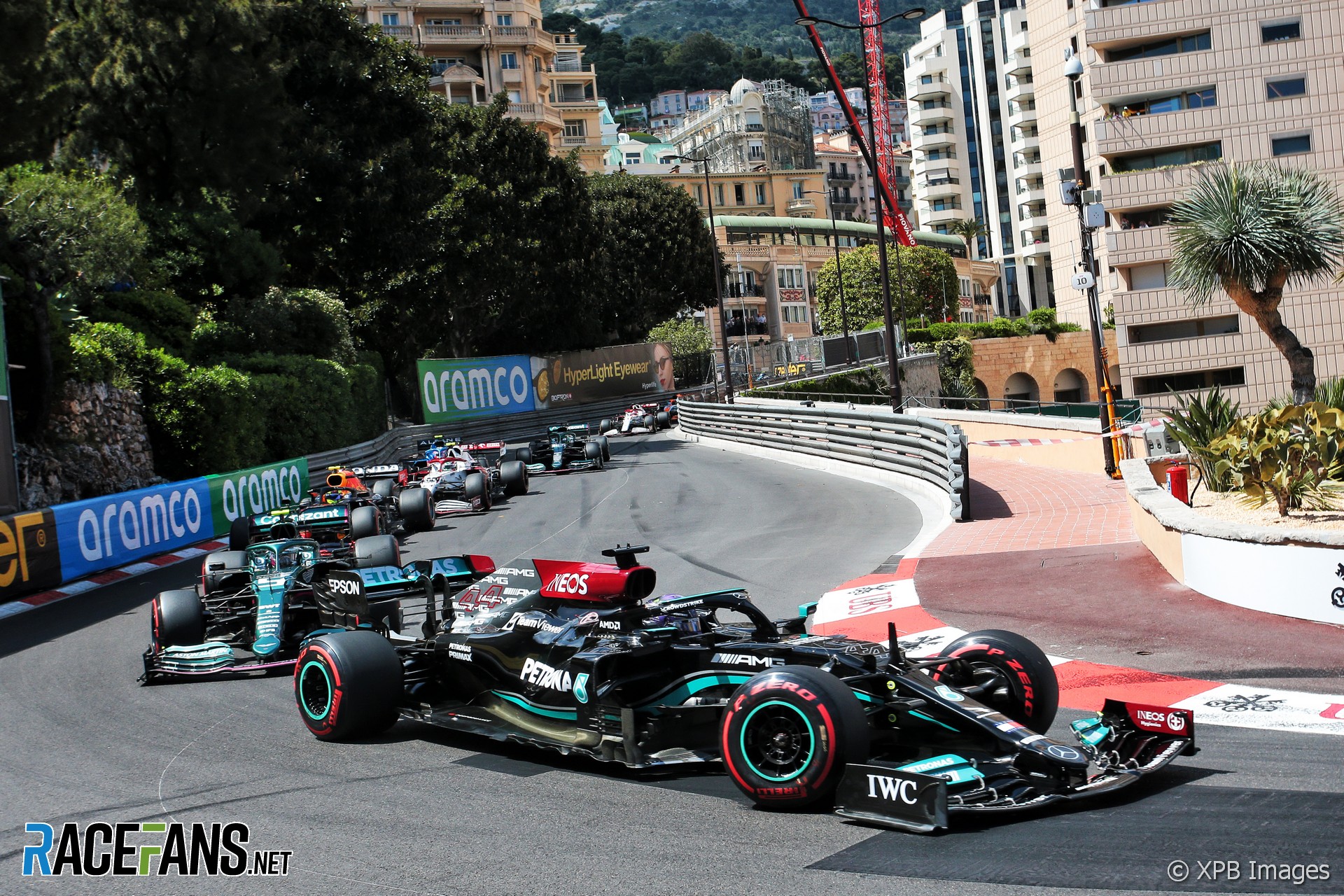 Lewis Hamilton says Mercedes’ tough weekend int Monaco indicates they should be more competitive at other, more conventional circuits later in the year.

The team looked in good shape on Thursday, but ran into difficulties when the temperature fell at the circuit on Saturday. Hamilton qualified seventh and was unable to make any progress from there in a frustrating race for the seven-times champion.

Hamilton said the team had not been able to make the tyres work as well as their rivals had in Monaco.

“We’re struggling with our tyres in cold conditions for whatever reasons,” he said. “We couldn’t switch on tyres, get our tyres working the way the others could [in qualifying].

“But then at the same time, they were able to have really good long runs, good race pace. So that’s a big, big question of how we utilise the tyres on tracks like this.

“Obviously in the last race and the previous races we’ve generally been relatively good on the tyres, but this one particularly has been weak. So that’s an area that we need to try and understand and rectify for the future.”

Mercedes’ form at Monaco hasn’t been as good as at other circuits, Hamilton pointed out, which he believes is a consequence of the team’s design direction with its cars.

“This has never generally been a strong track for us,” he said. “We have the longest car.

“A longer car is like a bus to turn through the corners. It’s not as nimble as the others on the small track like this, but it’s great elsewhere. There are things that don’t work here which have boded well for the other circuits.”

Despite the retirements of two drivers who started ahead of him, Hamilton finished where he started after other rivals moved ahead of him when he pitted. He lost the lead in the championship to race winner Max Verstappen.

However Hamilton said he isn’t dwelling on the biggest setback to his championship bid so far this year.

“I don’t really feel any pain at the moment,” he said. “Of course it’s not a great weekend. But I’m not dwelling on it.

“There’s a lot that we could have done better in terms of how we prepared coming into the weekend. We’ve had some some good conversations through the weekend.

“But it’s not good enough for all of us. We win and we lose as a team and it’s collectively not a good job for all of us, across the board. We don’t take it lightly but there’s no point getting all depressed, we’ve got to start looking at the data and figuring out why we’re in this position.”

Hamilton pointed to the team’s track record in rebounding quickly from difficult weekends.

“We’re going to be on pause over these next days once we get some analysis. Naturally we all want answers within the team so I know everyone will be working flat-out to make sure that hopefully this sort of weekend doesn’t happen again.

“We’ve shown time and time again in the past that we can bounce back from these weekends. Hence why I’m not the most stressed. ”

“I’m sure the guys hopefully will get to blow off some steam, see their families tonight, and they’ll be back in the factory tomorrow,” he added. “I’ll be probably invited into a meeting already on Tuesday, and then probably one later on in the week in terms of our targets to analyse and then plan for the next one.”