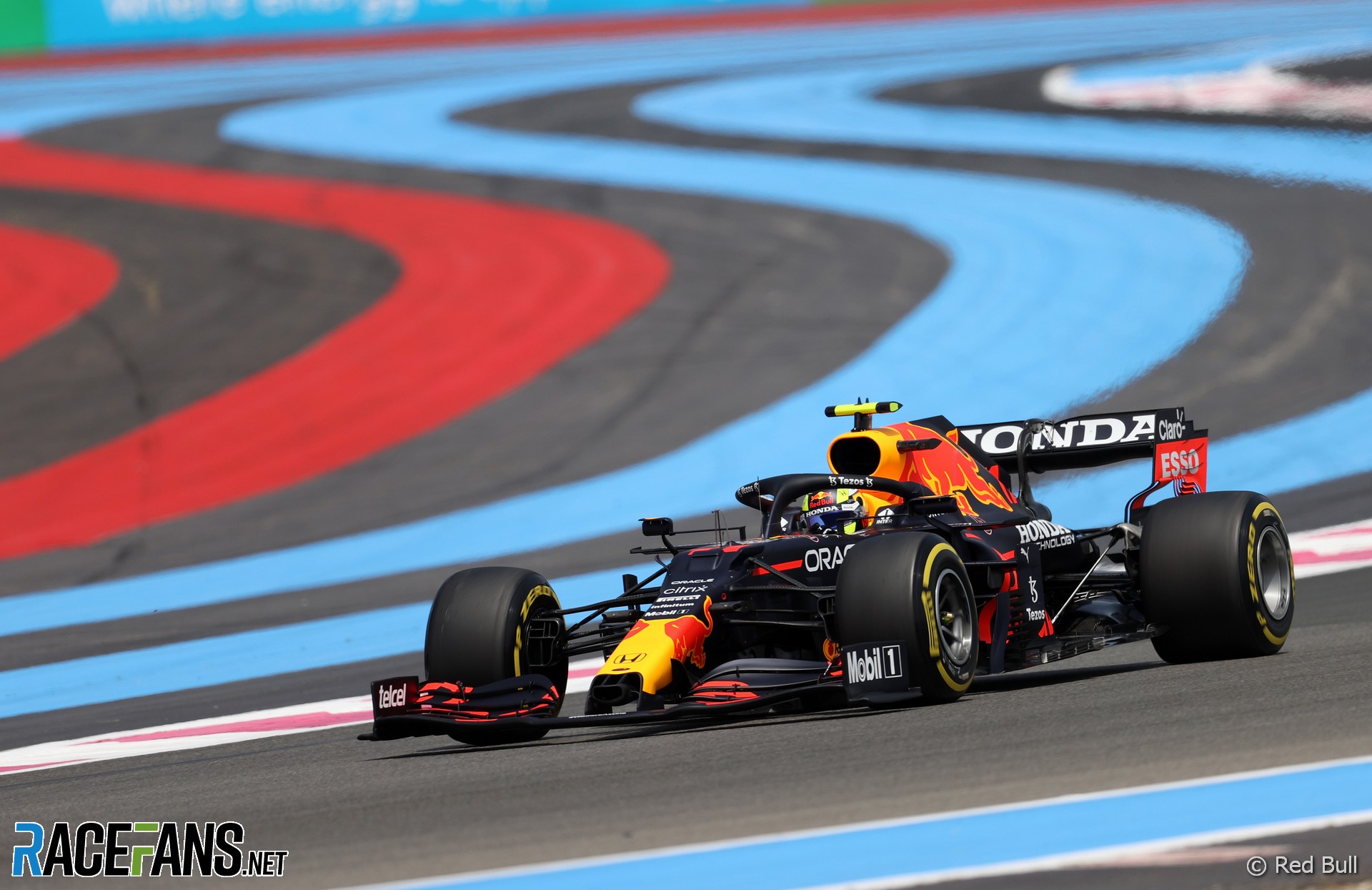 Max Verstappen has taken pole at the French Grand Prix, setting up a contest between Mercedes and Red Bull which is likely to come down to pit stop strategies and downforce decisions.

With Sergio Perez fourth and the two Mercedes drivers separating the Red Bull drivers, the front two rows resemble an expensive Battenberg of bodywork. For every pit stop one team makes, the other has a driver on hand to cover it off. The teams therefore can therefore match each other punch for punch.

The start of the race will be an area of concern for Mercedes. It’s a fairly long run to the first corner, and if Perez can pass either of the W12s then Red Bull’s situation will instantly become stronger. He played this role to perfection in Baku, which is why he was on hand to collect the victory spoils when Verstappen’s luck deserted him.

All 10 drivers who reached Q3 did so on medium tyres, which comes as little surprise – eight of the cars that started in the top 10 in 2019 did the same thing. Expect single-stop strategies to be the order of the day.

Pierre Gasly, who qualified sixth, expects “a more standard race track with the tyre management, tyre overheating and everything” compared to the last two encounters on the streets of Monaco and Baku.

For the drivers starting in the bottom half of the field, what sort of advantage will having a free choice of tyres confer? Antonio Giovinazzi, who qualified 13th, said Alfa Romeo had been aiming for the perfect, sweet spot just short of Q3.

“Our target was P11, to be close to the top 10 but not quite in it,” he said, “as we knew the soft tyres would not be a good compound for the race.

“Choosing our starting tyre will allow us to maximise our strategy: if we have a good start and a clean first lap, we can make up some places and make our way into the points. Our race pace wasn’t bad so we can be confident.”

Changeable conditions at Paul Ricard, as well as some disruption to sessions so far, mean getting a clear idea of how cars will perform in the race is very difficult. Made more so by the fact conditions are set to change again tomorrow, though the chance of rain remains low.

Hamilton’s long run at the end of second practice gave little away about his potential pace. He hovered around a 1’38 lap for the short simulation stint he did, which looks unpromising, but as he pointed out later he’s made several changes to his car since then. “On long run pace I think the Red Bulls were a tenth or two quicker than us in FP2 but my car is in a much different place now,” he observed.

Sergio Perez was running around a 1’38.6, quite a bit slower, though it was at this point Verstappen’s race engineer pointed out his team mate was using a different engine mode. Verstappen averaged around a 1’37.7 lap – more encouraging for Red Bull fans, except that Bottas’ equivalent stint was around a 1’37.4.

Further back in the top ten, Pierre Gasly’s pace was around a 1’38.8 while Fernando Alonso’s was a 1’38.4. Alonso’s team mate Esteban Ocon, was closer to Gasly’s pace and, having qualified 11th, he is free to start on hard tyres tomorrow, which the Alpine cars looked much more competitive on

Carlos Sainz Jnr has been cautious about Ferrari’s race pace relative to their qualifying performance but they look at least comfortably midfield with a 1’38.3 for a medium stint.

At the time of writing, the FIA’s weather forecast indicates a 20% chance of rain from the race start time. There is a higher chance of rain earlier in the day, which could diminish the rubber build-up on track which would likely have a negative effect on how well the tyres last.

Rain seldom plays a role at this venue, but wind does. A headwind in the straights will hurt high downforce cars, a tailwind might make low downforce cars hard to control into the corners.

A crosswind could just make life fairly difficult for everyone, on a circuit as exposed as Paul Ricard. All three managed to happen over the course of qualifying, so it’s probably best to think of the weather as chances to be taken when they’re there.

Red Bull trimmed out their cars ahead of qualifying. Will the reduction in downforce make it harder for them to look after their tyres? Sergio Perez said after qualifying he believes their rubber will hold up. But the shocking developments of the last race won’t be far from their minds, and it remains to be seen what effect Pirelli’s new restrictions on tyre use will have on Sunday.

Who will win the latest encounter between the title contenders? Share your views on the French Grand Prix in the comments.