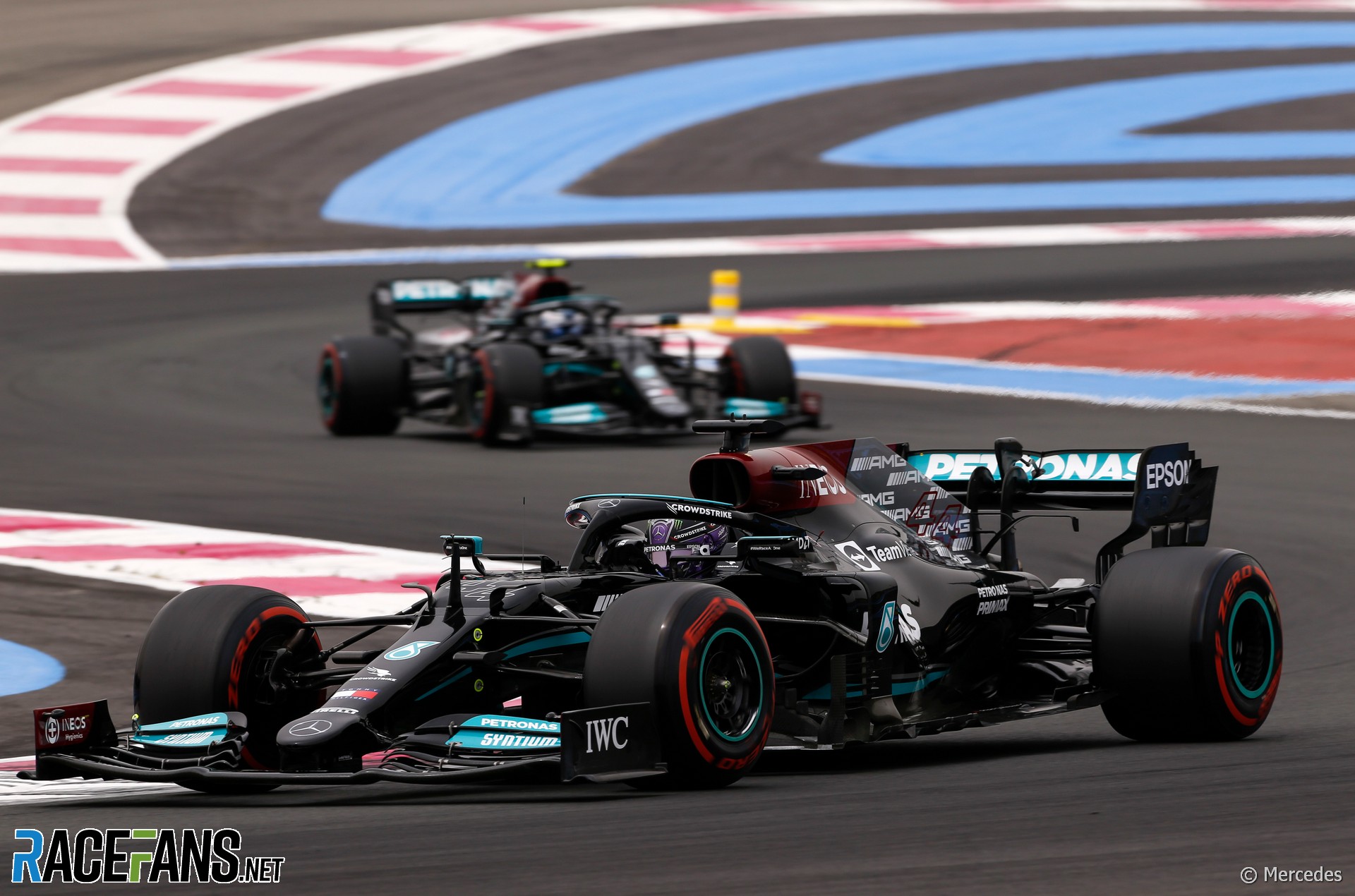 Mercedes’ decision to swap the chassis being used by Lewis Hamilton and Valtteri Bottas at this weekend’s race prompted speculation over its cause and effect.

As Bottas endured a poor weekend at Azerbaijan, and Hamilton lagged behind him in the opening three practice sessions at Paul Ricard, some wondered whether the world champion had been left at a disadvantage. The results of qualifying, where Hamilton beat Bottas to second on the grid, silenced that suggestion.

The opposite view, that Hamilton stood to benefit most from the change, was espoused by the team’s former driver Nico Rosberg during the build-up to the race on Sky.

“I think Valtteri’s chassis was the younger one because he changed after Imola,” Rosberg claimed.

“He got a fresh chassis there, so Lewis’s chassis had a lot more miles on it. Lewis wasn’t feeling comfortable, especially in Monaco.

“So from my point of view, it was Lewis saying in the team ‘hey, I want to try Valtteri’s chassis, I want to see if there’s something wrong with my car and see if I can find some extra performance’. I think he was pushing for it.”

Adding fuel to the fire, Rosberg claimed this was never done during his seven-year stint with the team alongside Hamilton and his predecessor Michael Schumacher.

“We would never switch chassis between drivers,” said Rosberg. “If I would feel bad, I might push for a new chassis, but never to get the chassis of a team mate. This, for me, is an indication also that they are really trying to give a little bit more of a preferential treatment to Lewis than usual, which is understandable. He is in that straight fight with Verstappen, so he needs all the help he can get.”

While some teams guard the details of which chassis their drivers are using, Mercedes routinely disclose who is using which tub at each race. Therefore Rosberg’s claim could be quickly disproved: He took over W06 chassis one at the end of 2015, which Hamilton used at the beginning of the season.

Nonetheless the suggestion Mercedes were handing Hamilton an advantage struck a chord with many, and Rosberg’s comments were widely regurgitated without question.

When Hamilton emerged from his car after qualifying second yesterday, he took Sky’s Paul di Resta to task over how the chassis change had been covered. “I saw you coming up with some myth and I’m happy to be able to prove it wrong,” he said, adding “all the cars are exactly the same.”

“I heard yesterday that Paul was saying something about the chassis,” he explained in the press conference afterwards. “I think he said there was a press release… I don’t know. And then just creating the question about whether our chassis were the same et cetera.

“As you can see, today I managed to do a great job with the same car, so it’s no different.”

Like their rivals, Mercedes are racing chassis which are based on those which were used last year, and therefore began the season having covered different mileages, as Mercedes CEO Toto Wolff explained on Saturday evening.

Bottas’ crash at Imola led to him being given a different chassis. He took over number four while Hamilton continued with six. Those were exchanged this weekend – so the lower-mileage chassis transferred from Bottas to Hamilton – and a repaired number five chassis from Imola will return at a later stage in the season.

“In the modern day and age, those chassis come back to the factory, they are laser scanned,” Wolff explained, “They are checked for stiffness and T&D” – test and development, a department within the team.

“These were all chassis that won races over the last few years, chassis that now have been utilised by everybody, by both drivers,” Wolff confirmed. Whether that explanation will satisfy his former employee remains to be seen.