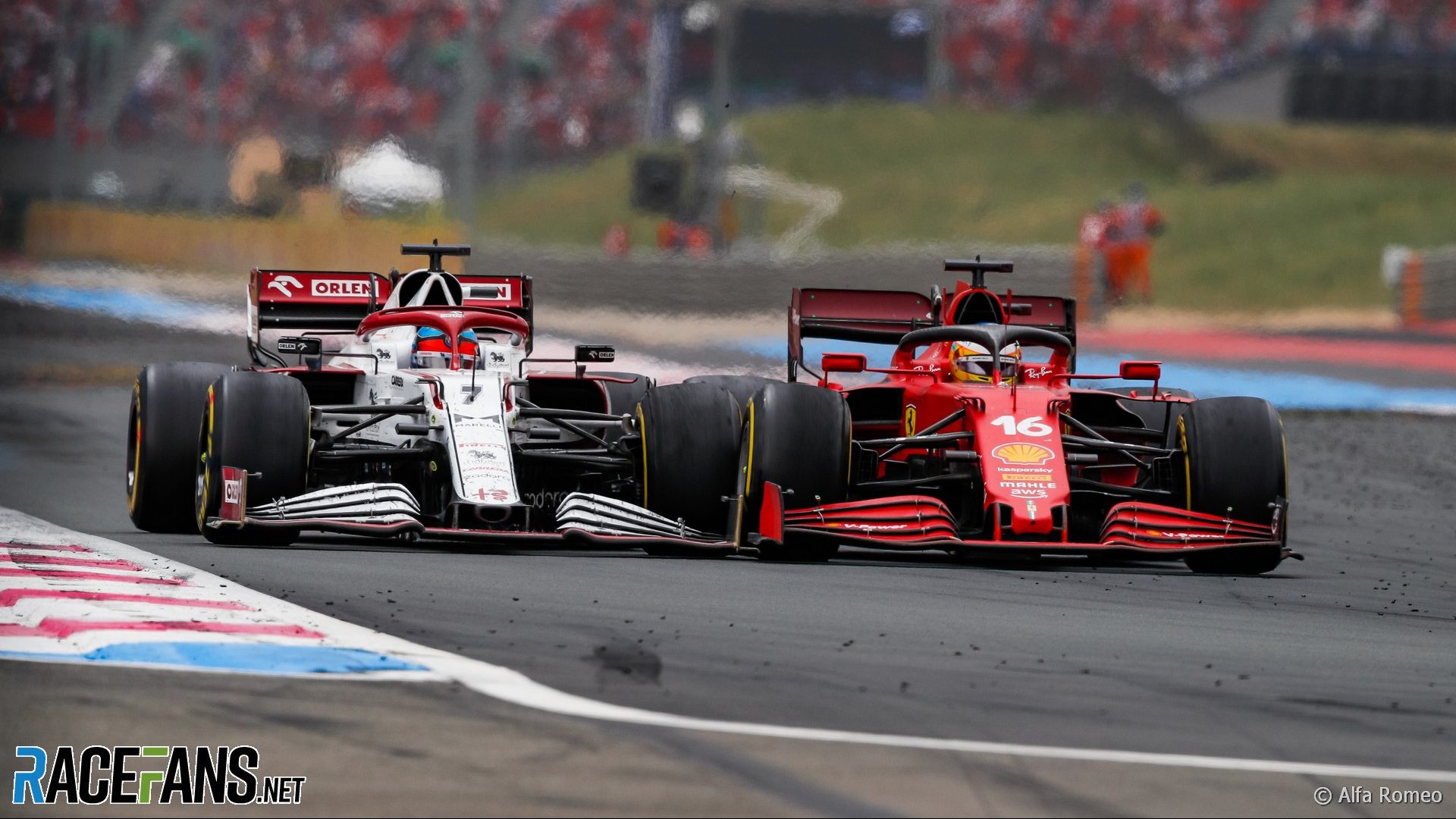 Besides being the 2007 Formula 1 world champion and 21-times grand prix winner, the fiercely independent Kimi Raikkonen has acquired another accolade of late. Last year he surpassed Rubens Barrichello as the most experienced driver in the history of the sport.

Raikkonen, who spoke to RaceFans on the occasion of his 340th grand prix start at the Hungaroring last weekend, is characteristically nonplussed by such milestones. But he’s come a long way from the driver whose made his F1 debut 20 years ago after just 23 starts in Formula Renault.

Today’s superlicence points system would make such a leap impossible. Then-FIA president Max Mosley cast doubt on Raikkonen’s suitability for his debut, and required him to complete his first four races on a probationary basis. Sixth place on his debut – which paid one point back then rather than eight today – left few in doubt of Raikkonen’s abilities.

It wasn’t as if the driver who emerged from a relatively obscure background in karting needed more obstacles placing in his path. Indeed, as Raikkonen explains, he didn’t even consider Formula 1 a likely destination until shortly before he arrived.

“I was doing go-karts and it got to the point that it didn’t cost anything,” he told RaceFans. “I got some pocket money working with Peter de Bruijn between the races and building go-karts that I sold. I thought that I can do go-kart for the next 10 years and at some point I’d get some money out of it.”

Having dipped his toe in the Formula Renault UK series at the end of 1999, Raikkonen returned for an assault on the championship the following year. From 12 rounds on unfamiliar circuits he produced seven wins and a further three podium finishes.

The patronage of David and Steve Robertson, who funded his move into car racing, propelled Raikkonen into F1 with astonishing speed. “Without the Robertsons I would never had the chance to go for the racing in cars, that’s for sure. That was the next big step from go-karts.”

He also pocketed his first salary, a chunk of which went back to his parents who had bankrolled his karting, and was used to pay for improvements to the family home. “We never had an indoor toiler when I lived there and obviously we did that work, and I bought a small piece of land next to our home.”

Based on Raikkonen’s remarkable showing in Formula Renault, the Robertsons persuaded Peter Sauber to give him a Formula 1 test. The chosen venue was Mugello, a high-speed circuit where the young driver found the cornering performance of F1 cars was a shock to the system.

Raikkonen admits he had little idea at the time whether he was up to the physical demands of driving an F1 car, but wasn’t about to voice any doubts. “If I had a chance, I will take it, because obviously you might not get many chances in here. I obviously tried to use the chance as long as I can. Who knows what comes out of it.

“For sure it was hard to drive it. No power steering, my neck couldn’t take it. Obviously from Formula Renault the braking and the speed through the corner was completely a different story than I was used to. So on that side I was not ready. But obviously I wouldn’t tell them that ‘no, sorry, I can’t come because I’m not feeling strong enough’ or something.”

A vital advantage he enjoyed back when testing was unlimited in F1 was that the team gave him three days of lapping with plenty of gaps between runs.

“The first day for sure [it felt] everything was like happening too fast. But it’s funny how the head works out. Once I slept overnight then everything kind of slowed down and was looking much more normal. So it became much easier.

“Obviously they knew that it will be difficult to do many laps in a row. So I did like three laps always in a row and then came in.”

Mugello was “not maybe the easiest place” to have his first F1 test, he admits. “But I wouldn’t complain. For sure it wasn’t sometimes so easy the steering on the fast corners without the power steering but it worked out okay.”

The addition of Raikkonen’s name to the 2001 Formula 1 entry list prompted bemusement from many: Who was this Finnish driver who hadn’t been seen on a Formula 3 grid, let alone Formula 3000 (precursor to today’s Formula 2)? His lack of experience led to the infamous wrangle over his superlicence, though Raikkonen didn’t concern himself with the detail of how long his temporary licence was due to last.

“There was this story about the superlicence, if I would get it. Probably I worried about it but I never found out if I have it for one race or two races, I never even asked.” After acquitting himself well with the Sauber over the opening races, Raikkonen’s place in the sport was assured. His speed impressed too, so much so that McLaren passed over his team mate – their junior driver Nick Heidfeld – and promoted Raikkonen to their team for 2002.

This period of Formula 1 – light cars, V10 engines, tyre war-era rubber and unlimited testing – remains among his favourite in the sport. He names the 2005 McLaren MP4-20, in which he won seven races yet narrowly missed the title, as one of the most satisfying to drive.

“Those Michelin tyres when you could kind of pick and choose what you want, that was obviously nice,” he recalls. “It was like a set-up tool that every team could have their own wishes. That was a nice time.”

Its successor, which followed the sport’s switch to V8 engines, was better than its win-less record suggested, Raikkonen adds. “In 2006 the car was actually very good but the engine wasn’t good enough, obviously.”

By then he had already inked a deal to join Ferrari in place of Michael Schumacher and, as it turned out, win the title at the first time of asking with the Scuderia in a car he describes as another of his favourites.

Although he split from Ferrari just two years later when they made a swoop for Fernando Alonso, Raikkonen returned to the team in 2014. Four years later he scored his most recent victory to date with the team. Ferrari gave him the car he used to take that win at the Circuit of the Americas.

“It’s a full running car so I [can] take it to the track and use it,” he explains. “But obviously I need a few mechanics to come from Italy to start it up.”

He hasn’t taken it out for a drive yet, but intends to do so “when I’m old enough that it’s scary”.

Since losing his drive at Ferrari, Raikkonen is now in his third season back with Sauber in their Alfa Romeo-branded F1 outfit. There are some drivers who wouldn’t countenance staying on in Formula 1 with a midfield team after winning a world championship. Raikkonen’s remarkable longevity demonstrates he isn’t one of them.

Much has changed during that 20-year spell bookended by stints with the same team, and not all for the better, says Raikkonen. That includes the slashing of in-season testing as the calendar has become packed with more and more races.

“It really depends. If you have a good car everything is nice and easy, but sometimes it would be nice to try some things and see what happens.

“We can do it on Fridays in the race tracks. But I think how it was in the past, obviously there was less racing, but then we had testing. For sure that was harder than it is now.”

The sport becomes ever more tightly regulated with every passing year. Raikkonen fell foul of this at Imola in April, where he lost one of the team’s few top 10 finishes this season due to a regulation which even the stewards admitted was arguably inconsistent with other rules.

He finds the idea of a return to the slimmer rulebooks of the past appealing, if not realistic. Today’s generation of drivers are quick to ruthlessly exploit every last detail in the rulebook, he notes.

“In the past, the drivers kind of – I don’t know what’s the right word, not ‘fair’ – but now it’s more that you need the rules in a way. I think you could get rid of a lot of rules if you were more harsh on some things.”

He points to the ‘three strikes’ rule often used in enforcing track limits. “I don’t mean that you need to give more penalties or anything, but if you get penalised for doing something wrong, people would stop doing it because they know.

“Now there’s always this grey area that you have ‘three chances’. So obviously everybody will use it. But if you tell them ‘this is what’s going to happen if you do it’, we will not do it because we know. Now you can get away with a lot of things, but not so much.”

“If we’re told that if you go off, obviously there’s things [from the car] that you can lose if you go off, but those are usually quite obvious things. So nobody will take the piss out of it. But that’s not our thing to change.”

While other areas of the sport have changed, it’s the difference in how drivers race each other which stands out more for Raikkonen than anything else.

“There’s more people, bigger motorhomes, bigger factories, all these things. All the small details matter much more now than when I started. But I think the driving part hasn’t really changed that much.

“The rules have changed, some cars being faster, some slower, because of the rule changes from year to year. But honestly if it’s a five seconds difference, you don’t really feel it. It’s not much. It’s a lot on the watch but when you go around, it’s like it’s the same. [From] qualifying to race you don’t lose that much because we are on full tanks but it doesn’t change the life.

“In the earlier days maybe the racing itself was a bit more fair. If somebody was there [alongside], you didn’t kind of push him off. Sometimes, yes, but that was maybe different then.”

But in characteristic Raikkonen fashion, he isn’t about to wax lyrical about how different today’s cars feel compared to their predecessors.

“Obviously the cars are now very big but because you go from year to year, you lose the reference. Now if we go and drive the mid-2000 or whatever, those cars, they feel a lot different for sure.

“But if I tell you that they were a lot different I would bullshit because your memory plays a game. I don’t know – was it better or it’s now better? It’s what it is.”