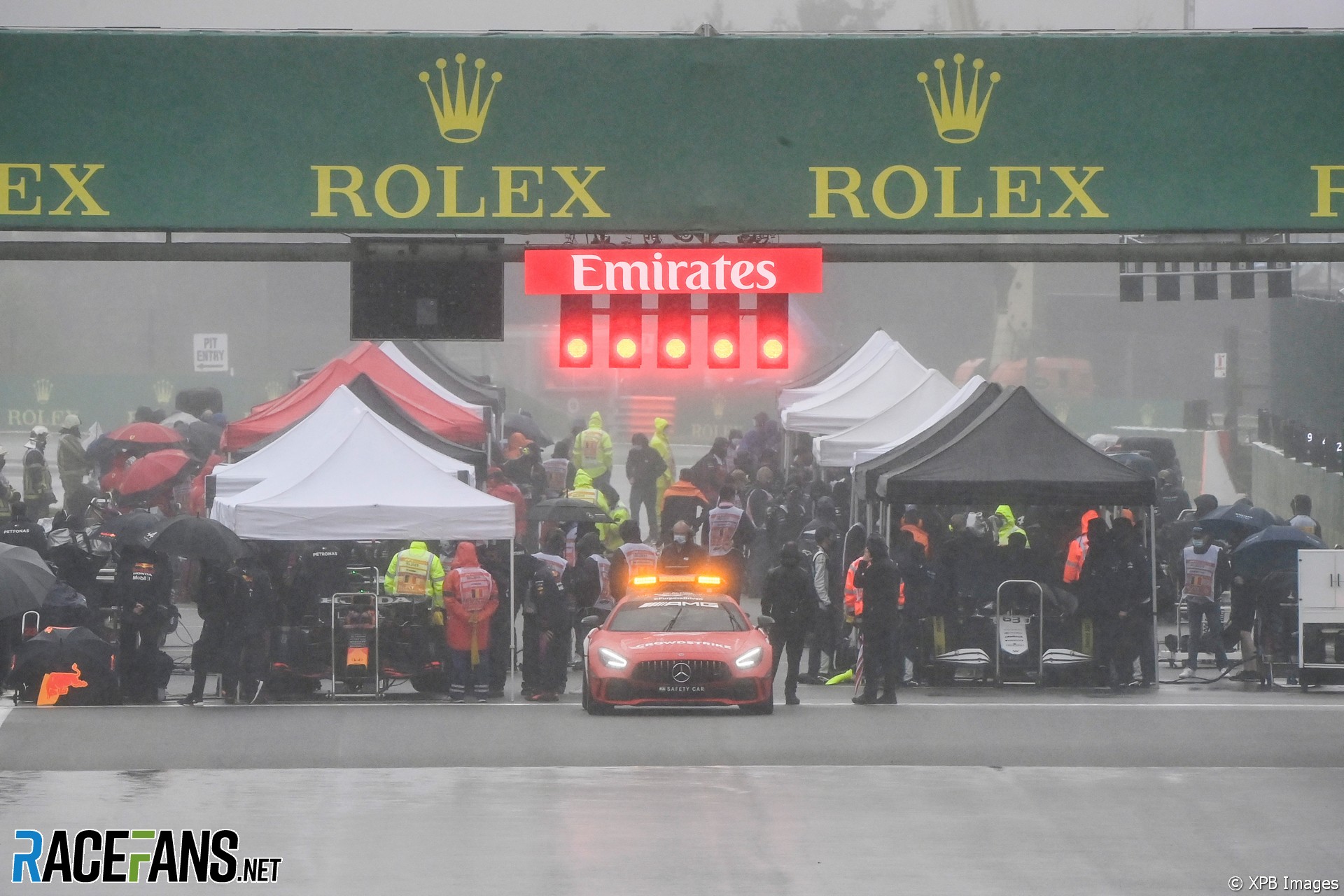 If any driver deserved a lucky break this season, surely it was Max Verstappen.

So if anyone was going to profit from a race in which no actual racing took place, the fact it was Verstappen at least has a hint of karmic re-alignment about it. In every other respect it absolutely stunk.

This is not to say the FIA was wrong to keep the F1 field behind the Safety Car whenever they hit the track yesterday. The conditions never really looked up to racing. Sergio Perez, a driver with over 200 starts to his name, binned his car on the reconnaissance lap.

Nor is it necessarily fair to insist the F1 cars were only sent back on-track late in the afternoon to ensure the bare minimum number of laps were completed for points to be awarded. On the contrary, at the time this seemed a genuine attempt to get the race restarted as the rain briefly eased. Unfortunately, the window of slightly less terrible weather proved vanishingly narrow, the rain swiftly returned, and the race was doomed.

As a result the 2021 Belgian Grand Prix did not contain a single racing lap, and therefore does not deserve to be regarded as a race. It’s clear many of the competitors feel this way: “No race”, lamented Pierre Gasly on social media; “race cancelled” echoed Lando Norris.

Nonetheless Formula 1 went through all the motions of celebrating the end of the race: the podium, the trophies, the champagne. And, of course, the awarding of championship points, which was criticised by several drivers including some of the recipients. Fernando Alonso called the decision “shocking” and Norris also pointed out the simple fact no points should be awarded when no race has taken place, regardless of whatever bureaucratic gymnastics have been performed to claim otherwise.

F1 badly needed to take a lesson from the World Endurance Championship. In 2013 its Fuji round was drastically shortened and run entirely behind the Safety Car, also due to heavy rain. Points were awarded, but the organisers had the sense to recognise the absurdity of that decision, and resolved to put it right.

So for the following year the series’ 2014 rules were amended to state drivers must complete at least two laps of green-flag running before any points can be given. A simple fix which F1 could have done with seven years later.

Instead the FIA tied itself in knots justifying its decision to hand out points. A minimum of two laps are required for points to be awarded, yet the race only officially lasted one lap. But the FIA decided, as Verstappen had been across the finishing line three times, he had in fact done three laps. So this was a one-lap race in which the winner covered three laps.

Is Formula 1 a serious sporting contest or WWE-style made-for-television entertainment? Given the risks involved – made obvious by Norris’ huge Saturday shunt – it should be the former; the low bar set yesterday for handing out points and the flimsy justification for doing so suggests otherwise.

There was a telling detail that someone at F1 realised what a sham the whole thing was: The ‘Driver of the Day’ poll was quietly dropped. Apparently F1 is happy to give the same number of world championship points for one lap behind the Safety Car as they would for 32 laps of actual flat-out racing, but the integrity of the ‘Driver of the Day’ poll must not be violated.

The unrealised potential of a race around one of Formula 1’s greatest circuits, with the championship contenders up at the sharp end and the intriguing prospect of George Russell’s Williams in among them, was a disappointment to all. But it will have been felt most keenly by those who’d coughed up hundreds if not thousands of Euros to attend, and spent a day being lashed by rain without seeing a single lap of competitive action in the main event.

Formula 1 wasn’t the only act on the bill on Sunday – those spectators did at least get to see Formula 3 and Porsche Supercup races. But if the F1 drivers are getting half points for no racing laps, the fans surely deserve at least half their money back.

133 comments on “F1 should hand out refunds, not points, after one-lap ‘race’ at Spa”