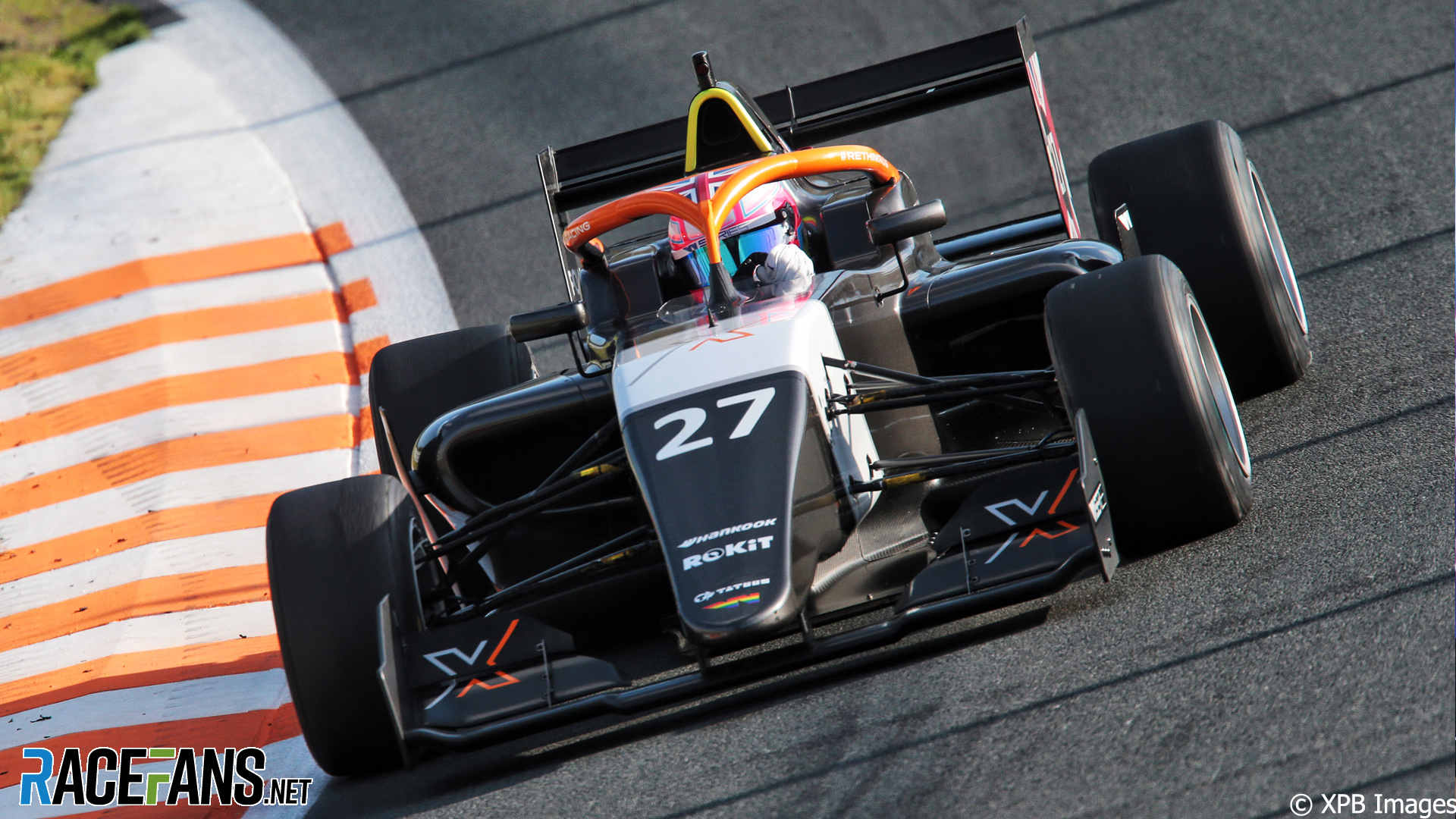 Emma Kimilainen started the race from pole alongside Powell, followed by Chadwick and Nerea Marti.

Bruna Tomaselli spun during the formation lap on cold tyres and was sent to the back of the grid to start in the 19th grid spot, with her original, 14th-placed grid spot left empty. Kimilainen also dipped a wheel into gravel on her way to the grid, spraying stones over turn 12.

Kimilainen got away with the lead, Powell and Chadwick tucking in behind her. Kimilainen went through the banking of turn three like a slingshot and looked set to pull out a substantial lead, in the early race.

Abbi Pulling, in her second W Series appearance, slipped back at the start, passed by Jessica Hawkins and Abbie Eaton before Belen Garcia pulled an incredible move through the final turn, neatly relegating Pulling to eighth.

After five minutes of racing, Kimilainen had a comfortable lead with Powell and Chadwick keeping the fight between themselves and the rest of the pack two seconds back from the leaders.

Hawkins was being most closely hunted by Eaton, just a few tenths of a second behind. The two fought closely for several laps, before Eaton came under pressure from cars behind and Hawkins was able to move forward to attack the leaders.

Powell took advantage of Kimilainen running wide and slipping back down the order, taking up the lead. The Ecurie W racer seemed unable to find pace, falling back and easily out-dragged by Chadwick down the pit straight, despite W Series not running DRS.

Two laps later, Nerea Marti in fourth was told “you are faster than Emma” as Kimilainen seemed to rediscover some speed, defending against Marti. Their fight allowed Hawkins to catch up, turning it into a three way battle by the halfway point in time.

On the penultimate lap, Abbi Pulling had caught Belen Garcia, the Scuderia W driver suddenly finding herself defending hard. Pulling attempted to repeat Powell’s move up the inside on Kimilainen but couldn’t quite carry the speed. However, on the final lap Pulling carried more speed out of turn three’s banking, taking the inside line again and taking seventh place.

Powell crossed the line in the lead, Chadwick and Kimilainen following her home. Marti was denied a second podium of the season but Hawkins took fifth for her best result so far this year.

Speaking after the race, Kimilainen said she had had no specific problem but that she and her engineer just “didn’t get it quite right with the car” for race setup.

Powell’s win puts her and Chadwick both on 109 points, before the final two rounds, Kimilainen is in third place, on 75 points. The final two W Series races of the year are planned to be at F1’s rounds at Mexico and the USA.