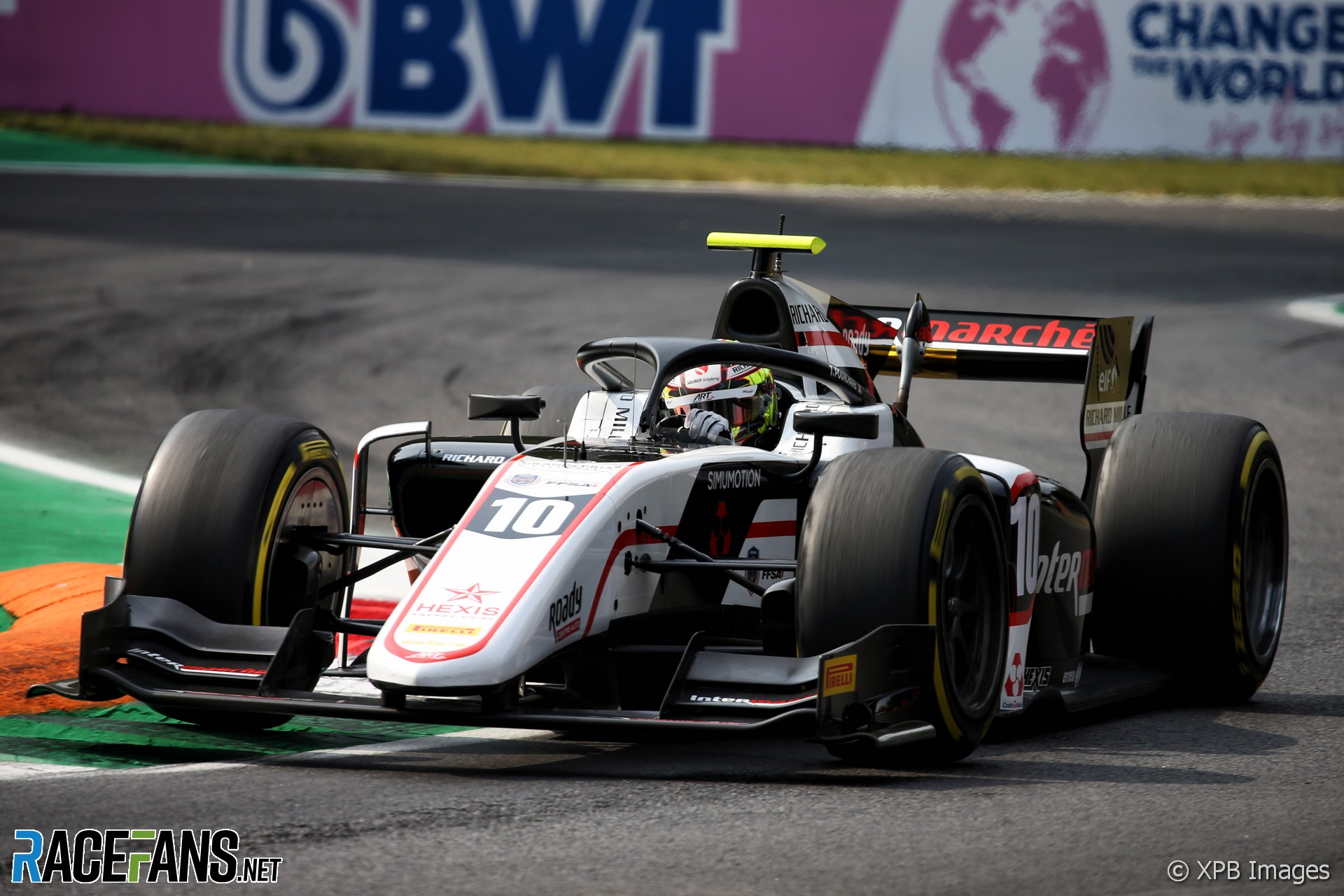 David Beckmann had taken pole position for the first race following his move to Campos, having been tenth fastest during yesterday’s qualifying session. He had Jüri Vips lined up alongside him on the front row, Dan Ticktum and Pourchaire behind.

Vips made a better start than Beckmann and passed him for the lead into turn one, leaving Beckmann to resist Ticktum for second place. Turn one proved eventful again on only the second lap, when the duelling Ticktum and Pourchaire went too deep into the corner and the Carlin driver was collected by Felipe Drugovich as he rejoined. That sent Ticktum’s car spinning to a stop, his race over.

The Safety Car was summoned for the first time. Meanwhile Ralph Boschung was shown the black and orange flag for front wing damage and pitted at the start of lap five, just as the race was restarting. The timing of the pit stop later attracted the attention of the stewards.

Vips maintained his lead while Liam Lawson challenged Pourchaire for second. The ART driver bottled him up at the exit of the corner and Lawson clipped the back of his car, resulting in front wing damage and a trip to the pits for him, too.

Felipe Drugovich went off at Ascari shortly after the restart, prompting a two-lap virtual safety car period. Racing restarted on lap seven and Robert Shwartzman made an ambitious lunge on team mate Oscar Piastri at Lesmo two, forcing his Prema team mate into the gravel, following which he lost a further place to Roy Nissany.

Nissany spun that place away – and all the others – at the exit of Ascari on lap 11, prompting another Safety Car period. Meanwhile the stewards announced Shwartzman would receive a five-second time penalty for driving off-track at the start of the race to gain places.

Second-placed Pourchaire got the better of Vips on the lap 15 restart and passed him for the lead with a late swerve to the inside at the Rettifilio chicane, feeding Vips back into Guanyu Zhou’s reach. Pourchaire looked untouchable, taking a string of fastest laps while Vips’ bad day turned worse as he locked up into turn one on the following lap and was forced to use the escape road to rejoin, dropping him further down the order to an eventual eighth.

On lap 19 of the expected 21 in the sprint race, yellow flags had to be brought out due to Lirim Zendeli stopping at the side of the track, effectively stopping racing for the whole of sector two.

Pourchaire, meanwhile, held his lead to the end and crossed the line with Zhou and Shwartzman behind. The Prema driver’s penalty dropped him out of the podium places, however, promoting Christian Lundgaard, who worked his way forward superbly from 19th on the grid.

Piastri inherited fourth, reducing his loss to Zhou in the championship, leaving the pair separated by five points. Shwartzman fell to sixth behind Lawson, followed by Bent Viscaal and Vips. Beckmann finished 10th after starting at the front, thereby earning himself pole position for this afternoon’s second feature race.