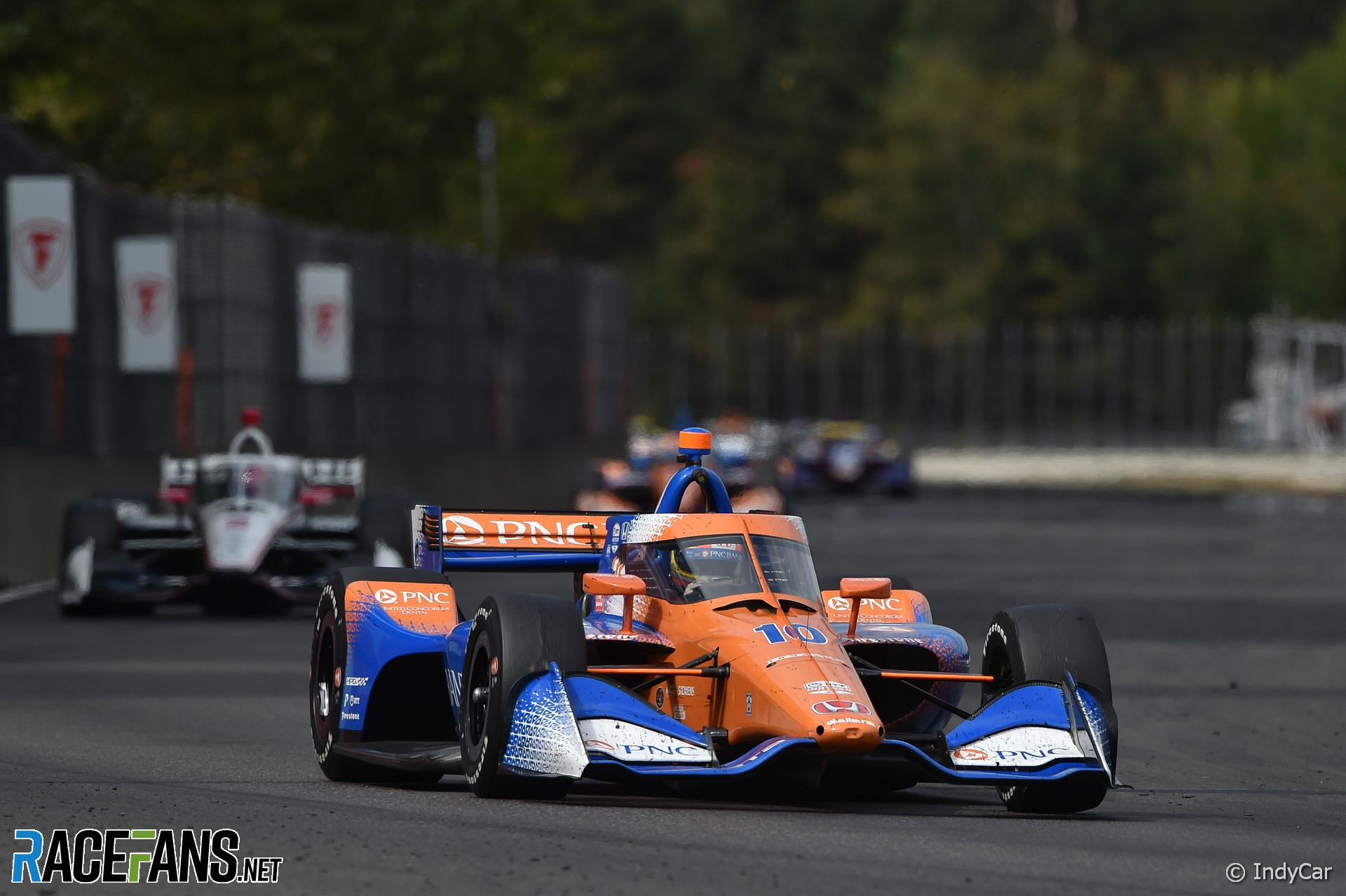 Álex Palou was not happy about being placed towards the back of the field early in Sunday’s Grand Prix of Portland following a lengthy full course caution period. As it turned out, the long period spent behind the safety car was what Palou and his Chip Ganassi Racing team needed in order to drive back to a crucial victory.

“Today worked out, but some other days, it didn’t work out,” remarked Palou. “You always want to be on the same strategy as your competitors, because you don’t want big things to happen. I prefer to win or lose on the same strategy.” Palou ran a two-stop strategy, as did championship rivals Josef Newgarden and Scott Dixon.

“I knew that Newgarden and Dixon were on the same kind of strategy, so I was happy with that. And I knew that Pato [O’Ward] was P1 at the moment. So were are a bit lucky today [despite] being unlucky.”

Palou was one of a handful of drivers placed towards the rear of the field for leaving the track limits following a first corner incident at the start. The opening 10 laps of the race were run under caution, which Palou says was the moment that he knew that the race could turn back in his favour.

“[I] was counting laps, and I was like, okay, this is a good thing. I know we can make the fuel mileage to make it in only two stops. I knew they were going to penalise us, but I knew that we had another option. We knew we had a really fast car. Even if we were on the same strategy as everybody [I thought] maybe we were not able to win, but we were able to be in the top five, top six, without a different strategy. You never know.”

“At the end [of the race] with that yellow, that put a lot of people on the same strategy as us,” Palou said, referring to the final 25 laps and two consecutive caution periods for incidents further back in the field. Palou was vulnerable on the restarts, running on the harder primary compound ‘black’ tyres, with those behind him on the alternate compound reds.

“I said, ‘oh man, maybe that’s not good for us.’ And then that last yellow, that made us restart on blacks while everybody was on reds didn’t really help us. But anyway, we made it.”

Palou and his Chip Ganassi Racing team mate Dixon were penalised early in the race for cutting the chicane at turns one and two, in order to avoid taking damage in the opening lap incident. Per the IndyCar rules, cars that avoided the collision while remaining on the track at the timing lines embedded at the chicane were placed at the front of the field at the subsequent restart, ahead of cars that avoided the incident – yet had to take evasive action by leaving the track.

“I don’t really know what happened there. I know Scott was on the inside. I got hit at some point,” Palou recalled of the turn one fracas. “I knew I had to go through the chicane. I made it through the chicane, and I said, ‘okay, I only lost like, five positions.’ Which is a lot, but I said, ‘at least I’m not out.

“And then IndyCar decided that I was not penalised enough, and they put me in the back. I don’t know what they wanted me to do at that point. Do they prefer me to, like, completely stop the car and make that corner, making the race unsafe? I think that was not right.

At the time it looked like being another in a series of misfortunes which have threatened to cost Palou his points lead. He suffered a terminal engine failure at Indianapolis Motor Speedway in August, then was collected in a crash involving Dixon and Rinus VeeKay at Gateway Motorsports Park. But after main rival O’Ward looks on course to cut into his advantage, Palou now has a 25-point lead in the championship with two races remaining.

He said that was far from his mind in the closing laps of the race as Alexander Rossi pressured him for the lead.

“I was not thinking at all the championship, and I think that gave us the win today, otherwise Rossi would have passed us. We think about the race, and I think until the last pit stop at Long Beach, we’re not going to think about what do I really need to do to win this championship.”