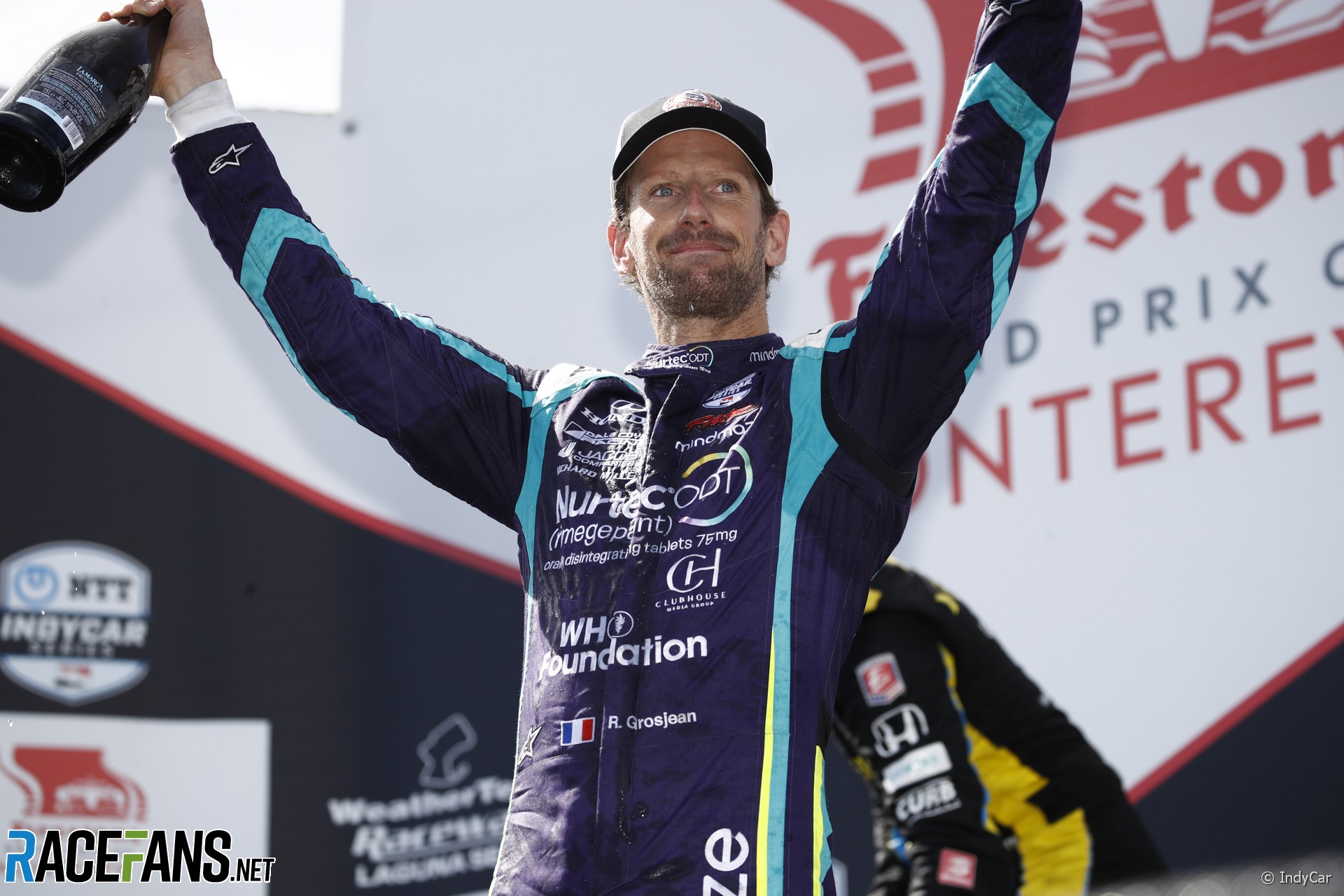 Following a third place finish at Sunday’s Grand Prix of Monterey at Laguna Seca Raceway, Romain Grosjean said he was nearly moved to tears by the ovation he received from the crowd for his performance.

“It’s difficult to describe. It’s just been incredible,” said Grosjean, fighting to find the words to describe how he felt upon his reception from the crowd after the race. “At the podium, when I got the ovation […] I almost cried, and I don’t cry very often. Because it’s been more than anything I could imagine.”

“Without the fans, we wouldn’t be racing,” Grosjean added. “They are a very important part of what we do. But what they give me back is just incredible. So I wanted to share with them the podium.”

Grosjean started 13th, and had worked his way into contention for a podium finish by the time he made his last pit stop on lap 73 of Sunday’s 95-lap race. He began his final stint from seventh place, a stint which he described as being in ‘French torpedo mode’ on the softer alternate compound tyres.

“I told my engineer [Olivier Boisson], ‘yeah, let’s go!’ He was worried that the tire would go off. But I felt like we had a good balance and I could just go for it. That was a fun stint.”

“But I’ll tell you one thing, the 60 laps beforehand were not fun!” Grosjean exclaimed, referring to his two stints on the harder primary compound ‘black’ tyres. “When I had to last 30 laps on the blacks, and make sure that we went long, long – and then eventually [run a] short stint at the end. That was not the funniest part of the race. But then the last 20 laps were good. I just knew I had much more pace.”

After overtaking Simon Pagenaud and Marcus Ericsson to run fifth, Grosjean drove around the outside of Patricio O’Ward at turn three for fourth place. That lap 81 pass on the championship leader, at a difficult corner for overtaking, was a worthy a contender for the most impressive move of the race. So was his earlier, lap 15 move on Scott Dixon at the Corkscrew.

Next Grosjean overtook the lapped car of Felix Rosenqvist, erased a four-second deficit to Graham Rahal in third place, and braked as late as possible into the Andretti Hairpin (turn two) to take the final podium position. With the Coyne/Rick Ware car’s pace in clean air, and race leaders Colton Herta and Álex Palou trying to get around backmarkers, the possibility of another runner-up finish for Grosjean, or even a first victory, wasn’t out of the question.

Grosjean had a two-and-a-half second gap to Palou with seven laps to go, but the Ganassi driver’s team mate Jimmie Johnson was the next car ahead. Attempting a similar move to his pass on Dixon, this time Grosjean came from too far back, locked up the front tyres, and made contact with Johnson at the first left-hand corner in the Corkscrew. Amazingly, both cars continued with negligible damage, and did not lose any positions.

“There was a bit of vibration going on after the touch,” Grosjean commented after the collision with Johnson. “I’m sorry to Jimmie for the contact out there. He was trying to protect Álex, and I wanted to go chase Álex.”

Grosjean’s third place finish at Laguna Seca brings him back to 20 points behind Penske driver Scott McLaughlin for the Rookie of the Year Award. However Grosjean said there would be no shame in conceding the award to the Penske driver, who unlike Grosjean has contested every round this year. “I’m very impressed with Scott McLaughlin, and his adaptation to single-seaters,” said Grosjean. “I think Scott definitely is more of a rookie than I am.”

As he nears the end of his first full season in IndyCar, with rumours strongly linking him to a full-time drive for Andretti next year, Grosjean’s US move has clearly paid off.

“I was one of the 20 lucky guys in the world to make it to Formula 1 and I had an incredible career,” he reflected. “Yes, the last few years were a bit tough and frustrating. I knew how to drive, but I couldn’t show anything.”

“So definitely, coming somewhere where you can fight at the front, where you have an engineer telling you, ‘you are the fastest car on track, you’re P1,’ you’re fighting for podiums, it’s definitely a revival,” said Grosjean.

And in a statement that resonated with IndyCar’s biggest advocates, Grosjean added: “I understand a lot of kids want to make it to Formula 1. But if it’s to be at the back of the grid every weekend, I think you’re better here.”