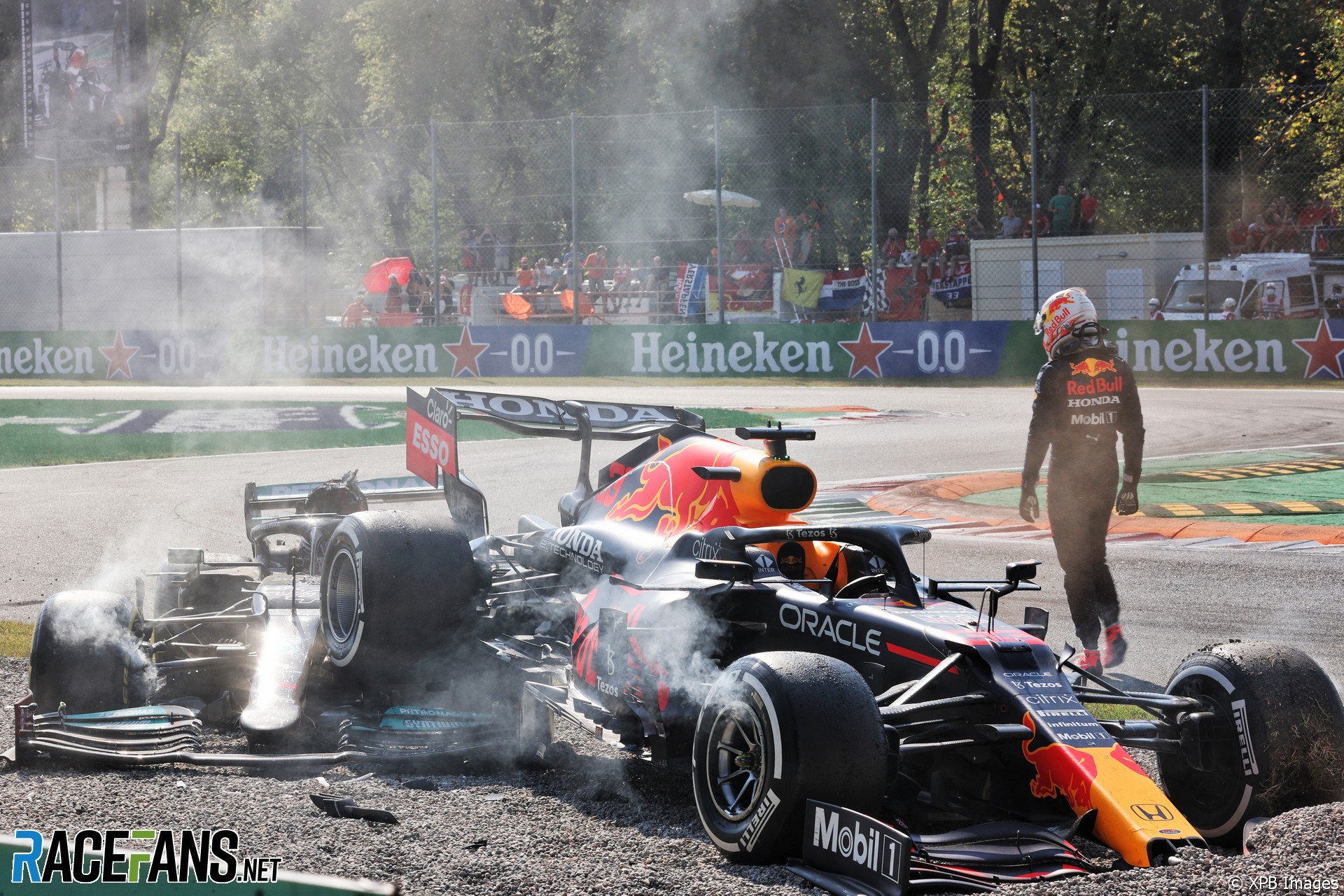 Max Verstappen gave short shrift to questions over his reaction to his collision with Lewis Hamilton at Monza and his rival’s suggestion he is feeling the pressure of the title fight.

Following the collision between the pair which put both out of the Italian Grand Prix, Hamilton said he was “surprised” Verstappen walked away without checking whether his rival had suffered any injuries when the Red Bull landed on top of his car.

Verstappen, who accused Hamilton of “disrespectful” behaviour at Silverstone for celebrating a victory after the Red Bull driver was taken to hospital for precautionary checks following another collision between the pair, said “there are a lot of hypocrites in the world” when his rival’s reaction was put to him.

Verstappen said it was obvious Hamilton had not been hurt in the collision. “I jumped out of the car, I looked to the left and he’s of course still trying to reverse, checking the wheel, trying to get away under my car.

“So I think he was absolutely fine because also flying on Monday or Tuesday to America to attend a gala, I think you only do that if you feel fine. I think already there everything was all under control.”

Red Bull motorsport consultant Helmut Marko also doubted whether Hamilton had been injured in the collision. Hamilton said he was in discomfort after the crash which his physiotherapist Angela Cullen worked on over the following days.

“It’s natural when a car lands on your head that you’re going to have some sort of discomfort,” said Hamlton. “As I said, I definitely felt a bit of something after the race.

“I said I was going get it checked out, I worked with Angela straight after the race and in the flight and had check-ups the next day. Then we just worked on it through the week with acupuncture and everything. In a millisecond anything can happen and so I did feel grateful to come out of it not badly injured.”

Verstappen, who was given a three-place grid penalty for the latest collision between the pair, responded sarcastically to Hamilton’s suggestion that the incident showed the Red Bull driver is feeling under pressure in his first chance to win a world championship.

“I’m so nervous I can barely sleep,” said Verstappen. “It’s so horrible to fight for a title. I really hate it.”

He said Hamilton’s comments show the Mercedes driver doesn’t know him. “If someone knows me I’m very relaxed about all those things and I really can’t be bothered. I’m very chilled.

“It’s the best feeling ever to have a car, a great car, where you go into every weekend and you can fight for a win. It doesn’t matter if you’re just leading a championship or not.

“I think those comments it just shows you that he really doesn’t know me. Which is fine, I also don’t need to know him, how he is fully. I just focus on myself and I really enjoy it out there in the front and hopefully of course we can do that for a very long time.”