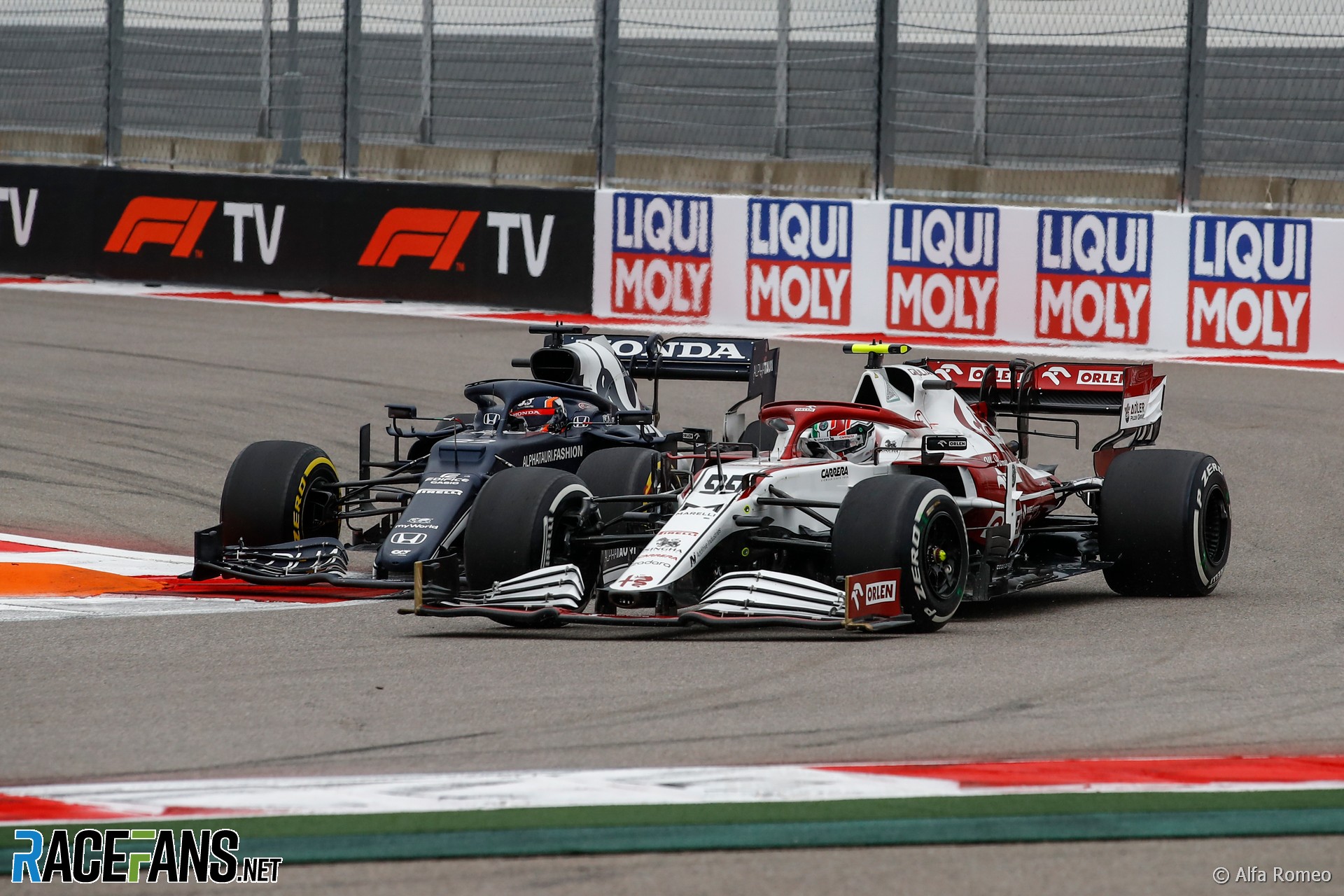 In the round-up: Antonio Giovinazzi spent most of the Russian Grand Prix “struggling with the car” after a radio failure left him unable to communicate with his team.

Giovinazzi: “I was struggling with the car, to be honest”

Giovinazzi revealed he suffered a radio failure on lap one of the Russian Grand Prix, meaning he had no way of communicating with the Alfa Romeo pit wall.

“A silent race with no radio again from lap one to the end,” said Giovinazzi. “I had contact on lap one and then I lost some time behind the Haas and Williams.”

Drivers had to make late-race calls on when to pit for intermediate tyres, in worsening conditions. Without being able to contact his team, Giovinazzi made a late tyre change on lap 50 – at the same time as Lando Norris, who had been attempting to go to the end.

“I was struggling with the car, to be honest,” said Giovinazzi, who finished 16th.

“It’s every driver’s worst nightmare to be leading the race and you start seeing rain on your visor.

“I’ve been there, it definitely hurts, but he’ll recover. I guess you try and take the positives from it and he’ll have a victory sooner or later, I’m sure.”

Ferrari team principal Mattia Binotto was pleased with the gains he saw from the upgraded power unit the team ran on Charles Leclerc’s car for the first time last weekend. “We introduced an update to the hybrid system for the power unit, which worked the way we had expected and produced a little bit more performance,” he said.

However, Binotto bemoaned that the team had been unable to secure Leclerc a points finish, despite his recovery from starting 19th.

“We were not perfect in other areas, for example the pit stops and tyre management with Charles in those final chaotic moments of the race, whereas with Carlos [Sainz Jnr] everything went according to plan and we will build on the experience gained today.”

Dennis Hauger, who sealed the Formula 3 title on Friday, was given a 10-second stop-go penalty, converted to a 30-second time penalty, after scrutineers deemed he had changed tyres without a permissible justification.

F3 does not have pit stops during its sprint race format and drivers are not allowed to change tyres unless they have become “punctured or damaged,” according to Article 39.8 of the series’ sporting regulations.

Hauger pitted, reporting serious vibrations, after spinning at turn seven. All four of his tyres were changed by his Prema mechanics but when checked after the race, the discarded tyres were judged not to have suffered enough damage to have justified the replacement.

The technical delegate examining Hauger’s car further found that there was no evidence of significant vibrations through the steering wheel, so Hauger’s stop was deemed a violation. All his lap times from lap 11 were therefore discounted. Arthur Leclerc therefore earned the final fastest lap of the season.

When the typically sleepy races are enthralling. You know you're in a special season. #RussianGP #F1 #C4F1

Lando, gotta feel for you mate. You did the right thing and followed your gut. It was alot easier for Lewis as he had nothing to loose with a free pit stop to retain P2. Such a cool race. Max and Carlos class drives also.

This has to be one of the best #F1 seasons ever. Awesome race. Loving it. Feeling for Lando but that win will come soon enough 🙌🏻 #F1

"The 15-year-old made a level start from the fourth row and capitalised on a first-lap collision between championship leader Matias Zagazeta (Phinsys by Argenti) and his chief rivals Matthew Rees and McKenzy Cresswell (both JHR) at Becketts to move into the frame for a third victory of the campaign."

"Martins: 'Now I finished P5, it was the worst I could’ve done. I’m happy because I’m the first rookie, but still a bit disappointed. I knew that if I was doing good enough this season, I could’ve ended up P3, but in the end it was a really good season, I learned a lot.'"

"Zhou: 'This weekend has been a tough one, but we are still there in the Championship. A few people are catching up behind us, but that isn't something to worry about.'"

Looking at who gained and lost during the Russian Grand Prix, Pinak Ghosh points out the Mercedes boss’ chance of predicting lottery numbers had a good day.

The winner of the day is Toto Wolff. He predicted a win for Lewis. That happened.

He wanted Bottas to pass the cars ahead and team wanted a top 5 and that happened too.
@pinakghosh