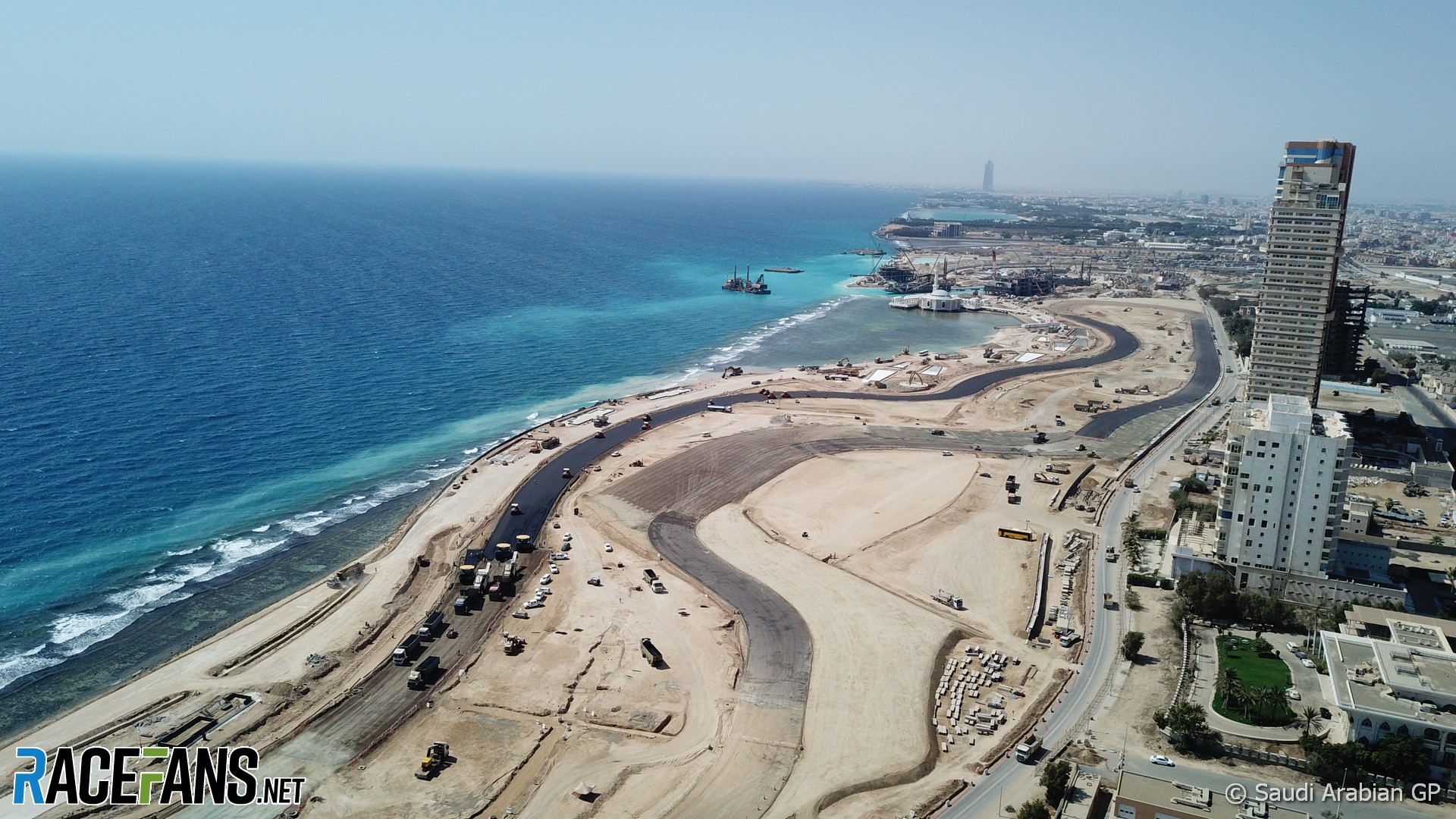 In the round-up: The promoter of the Saudi Arabian Grand Prix says the Jeddah Corniche Circuit is nearing completion.

Jeddah circuit will be “built in record time”

Following reports which claimed the new street track being built in Jeddah faced a race against time to be ready for its first grand prix next month the CEO of the Formula 1 Saudi Arabian Grand Prix, Martin Whitaker, told RaceFans work at the venue was proceeding well.

“The rate of progress on the development of the Jeddah Corniche Circuit as we enter the crucial final period of the track build is very good,” said Whitaker. “With almost all of the base course Tarmac laid by early September [the photograph above shows building work during August], we are now in the assembly stage of the circuit’s permanent and semi-permanent structures, including the stunning 280-metre long pit and team buildings alongside other buildings including the fan zones and grandstands.

“Completing such an undertaking in under nine months is a massive task but with just over two months to go, we are nearing the finish line on completion of the world’s longest, fastest and newest street circuit, built in record time.”

“It’s great for the team,” said Dixon after Palou’s triumph on Sunday. “Obviously it has raised the bar, but I think it’s raised the bar for all of us this year to keep pushing.

“It definitely feels like kind of the 2009 through sort of ’12-13 period with Dario, which is great. Obviously it was really only two cars at that point.”

“I’m excited for team morale,” Dixon added. “That’s the big thing. Obviously when you get beat, when it’s not just the drivers but the crews as well, it pushes everybody a lot harder. Hopefully we can come out of the gate very strong.”

Alpine won’t stand in the way of junior driver Guanyu Zhou if he has a chance to make his Formula 1 debut with Alfa Romeo next year, says executive director Marcin Budkowski.

“We are evaluating options for our academy drivers but the success of an academy is also measured through its output,” said Budkowski. “We are running this academy because we want to generate Formula 1 drivers, Formula 1 drivers for Alpine, and the academy as such is only successful if it does generate Formula 1 drivers, so we can’t stand in the way of our drivers who are mature for F1 and ready to take that challenge because that would be, obviously, negative for their careers and for them as individuals and also it would reflect badly on our academy.

“So these are the parameters we need to take into account when assessing our plans for next year.”

The team is yet to confirm its plans for Zhou and fellow Alpine junior Oscar Piastri, who is leading the Formula 2 standings. “We’ll announce this in due course,” said Budkowski.

Welcome to our 🇮🇹 office!

Technical Director Simone Resta shows us around our Maranello base, the epicenter of our 2022 car design. #HaasF1 #FWD2022 pic.twitter.com/xMSH2O40yz

Mexico, Brazil & Qatar as a triple header towards the end of the season. Team members should be applauded for their dedication. This is brutal. #F1.

Awesome day at Adria, takes me back to when I was a kid dreaming about F1. I can’t wait to see what the future brings for this kart and hopefully one day I’ll be racing with someone in Formula 1 who started out on my @LNRacingKart 👊 pic.twitter.com/Otx1T4vtTy

"DS Techeetah confirmed on Thursday that Tortosa had 'passed away suddenly' on September 21 at the age of 49."

"From the beginning, Palou went out of his way to meet crew members and ask very detailed questions about how he can improve pit stops and minor on-track details. That made Davis realise Palou had the potential to be special."

"The pole man has been the on-the-road winner in every one of the 16 races held so far this year, which has prompted a championship response to increase the action."

Shwartzman’s Guest Column: The Russian support really was something else (Formula 2)

"I was very disappointed because it’s really the only point that is preventing me from getting better results and we keep working so hard. There was some improvement but still, we need to do more."

The addition of Losail International Circuit to the F1 calendar was welcomed by at least one reader:

I know the reaction to this news is going to be overwhelmingly negative, but as someone who now lives in the GCC region having 4 races on my doorstep is incredibly exciting.
@Geemac

Show which drivers and teams you are supporting

Which F1 drivers and teams are you supporting this season? Here's how you can show your support for your favourite on the grid on RaceFans: