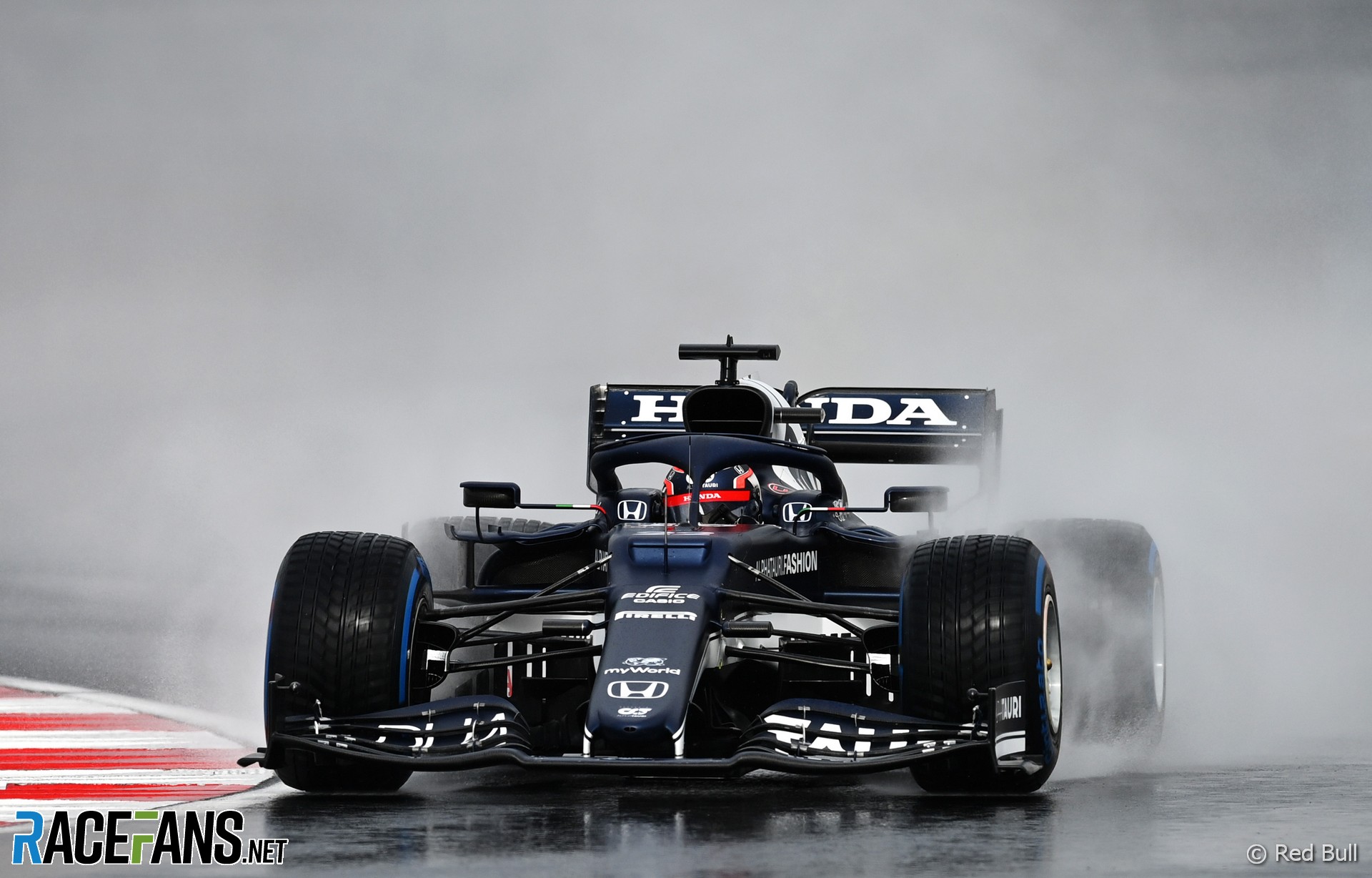 Pierre Gasly was quickest in a rain-hit final practice session for the Turkish Grand Prix on a wet track at Istanbul.

The AlphaTauri driver headed a one-two-three for Honda-powered cars, with the Red Bull pair behind him.

Gasly was the first driver out on track, heading out on the full wet weather tyres after 10 minutes of the final practice hour had elapsed. He and team mate Yuki Tsunoda were soon joined by both McLaren drivers, on the same rubber, for the early running.

Despite large amounts of standing water on the track and being displaced into the air by cars running, after just three laps Gasly said that his rear tyres had overheated too badly to continue.

Lando Norris was the first driver to attempt running intermediate tyres, 20 minutes into the session. However his lap times did not immediately improve compared to those still running full wets, with the middle sector remaining slower on intermediate tyres.

Nonetheless the track was clearly drying and more drivers switched from full wet tyres. George Russell chose to go out on intermediate tyres straightaway but immediately ran into trouble. His Williams snapped sideways at turn two and beached in the gravel. That caused a red flag period while it was retrieved, although there was no obvious damage to the car.

Several drivers had already encountered difficulties at turn 11, where there was substantial standing water if they went even slightly off-track. Gasly had spun there shortly before the red flag and Nikita Mazepin did the same almost simultaneously to Russell’s off.

The session restarted with 25 minutes remaining, the Red Bull and Mercedes cars finally making an appearance. Max Verstappen set a new best lap early in his run but then also spun at turn 11, before returning to the garage after relatively little running.

He did 11 laps in the whole session, coming out just before the chequered flag to set some more, while Lewis Hamilton set just five. Hamilton’s lack of running – avoiding any risk, in the wet – explains his 18th-fastest place in the times sheets, behind both Haas drivers.

With limited intermediate tyres available and the possibility of further rain before this afternoon’s qualifying session, drivers’ run timing played a significant part in their place in the order. Gasly, who ran 19 laps during the session, was able to keep the fastest time despite a late challenge by both Red Bull drivers.

Leclerc offered to change to slick tyres in the final minutes of the session but elected to stick with his intermediates. Underlining Ferrari’s promising form from yesterday, both he and Carlos Sainz Jnr were consistently at the sharp end of the session, which Sainz led prior to the red flag.

Both Alpines were, again in the top 10, as well as Kimi Raikkonen’s Alfa Romeo. However, that might not have been the case if McLaren had delivered on earlier strong pace by going on final runs, as the track developed or if Hamilton had completed a more representative lap. Raikkonen also had a near-miss in the pits when he was waved out in front of Mick Schumacher, though he team quickly advised him to move aside to avoid a collision.