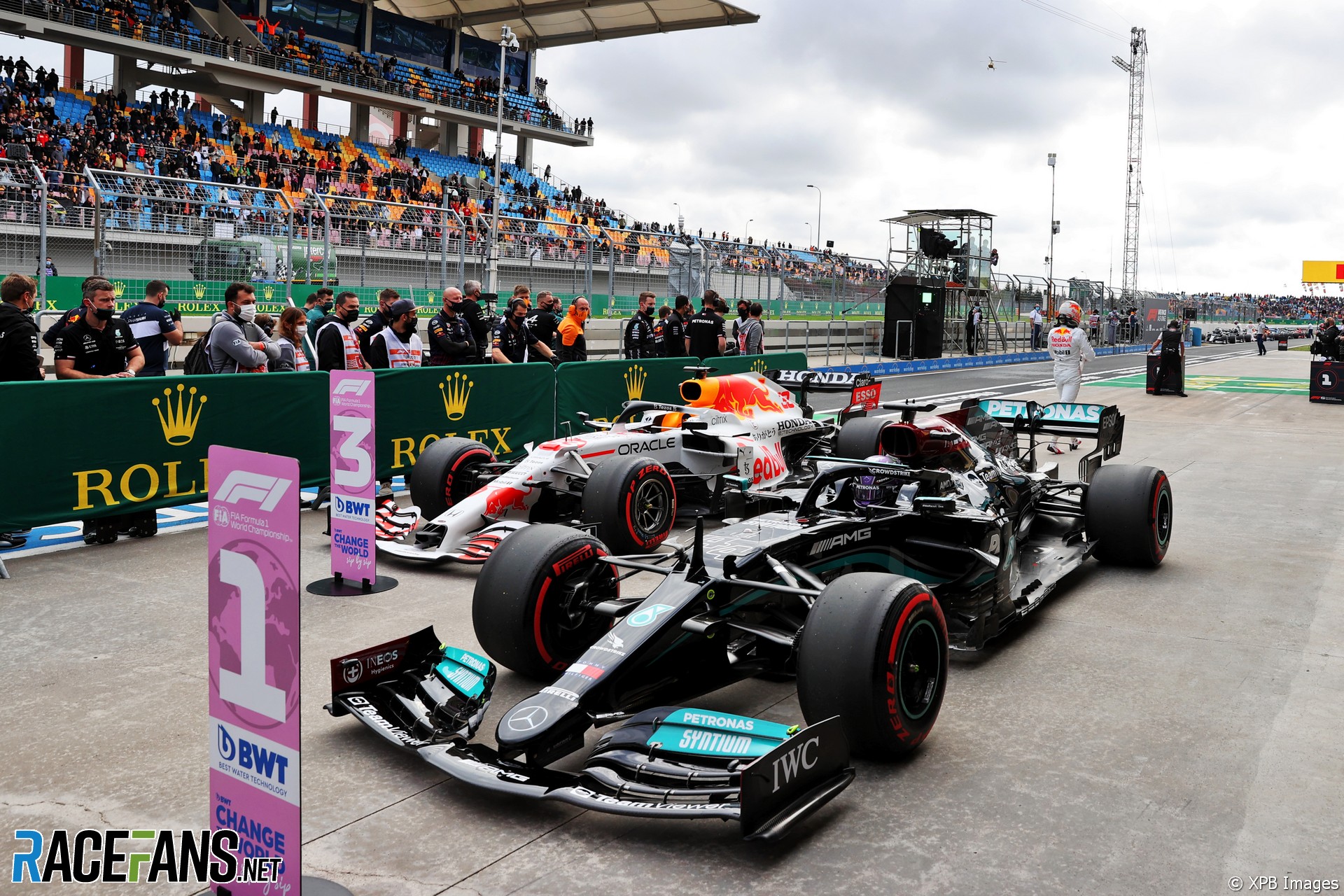 Lewis Hamilton set the fastest time in qualifying for the 2021 Turkish Grand Prix.

But because of a 10-place grid penalty for an internal combustion engine change, Hamilton will start Sunday’s race from 11th on the grid – and his Mercedes team mate, Valtteri Bottas, inherits pole position in Istanbul.

Just before the start of the first phase of qualifying, the risk of rain increased to 100 percent. A long queue of drivers made their way to the end of pit lane, hoping to get a lap on the board with dry tyres before the rain arrived. The expectation was that there would be a window of just under five minutes to get out, then set a flying lap on the soft compound tyres. As the session progressed, however, the rain did not fall as hard, or as frequently as expected.

Quite a few drivers spun off on their first flying laps – Carlos Sainz Jnr, already resigned to a back of the grid start, caused a brief yellow flag for a spin at turn one. Many of those who didn’t have a spin, just had their lap times deleted for exceeding track limits at turn one instead. Eventually, the drivers were able to get enough temperature in their tyres to string together clean laps. Even so, Yuki Tsunoda caused another yellow flag when he ran wide at turn one, missing the barriers on the right before rejoining the track.

Halfway into the session, drivers reported more rain, just in time for Nikita Mazepin to cause a short yellow flag for spinning off at turn one – the first of two clumsy excursions for Mazepin. Lap times began to dip down into the low 1’25 range at the top of the board. It was a fascinating development to see some drivers struggle to get temperature into their tyres, while others were complaining their tyres had too much temperature.

With less than five minutes to go, Lewis Hamilton’s suggestion of getting in another ‘banker lap’ brought him to the top of the table. The final seconds of qualifying set up a mad scramble to get above the 15th place cut line.

Mazepin and Kimi Raikkonen failed to advance on their final flying laps. Sebastien Vettel and Mick Schumacher bumped Nicholas Latifi and Antonio Giovinazzi below the cut line. For Schumacher, this was just his second time advancing into Q2, his first since the French Grand Prix. The other big surprise was Sainz, who found a way to bump Italian Grand Prix winner Daniel Ricciardo out at the conclusion of Q1.

Hamilton finished with the best lap time of 1’24.585, just 0.007 seconds ahead of Max Verstappen in second, followed by Pierre Gasly in third.

Q2 began with drivers getting out on track right as the clock began to count down from 15 minutes, including several drivers that broke out the medium compound tyres for the first time this session. There had been no significant rain fall since the end of Q1, but the cold conditions and lack of rubber on track caught out Sergio Perez, who had a case of snap oversteer into turn one. Perez nearly clattered the barriers to his right, but rejoined the circuit with no damage after a yellow flag.

Valtteri Bottas set the early benchmark with a time of 1’24.142, before Hamilton jumped to the top of the board with a 1’23.595 just before half time, and Verstappen moved up into second ahead of Fernando Alonso – with all of these drivers running on the medium tyres.

On the medium tyres, it seemed as if the best laps would come on the drivers’ second flying laps. With around six minutes to go, Charles Leclerc had a lap in progress that was good enough to put him in the provisional top five. But struggling for grip on his set of medium tyres, he spun at the last corner to undo the progress he’d made to that point – this left him perilously close to the cut line.

Lance Stroll’s last flying lap was undone when he ran wide through turn one, and a bobble from George Russell at the last corner ruined his last lap when he had a chance to bump his way back into the top ten. Vettel briefly pushed his way into the top ten, before being bumped by Leclerc – but he is set to start in the top ten anyway, because of Hamilton’s grid penalty. Esteban Ocon was bumped at the end of Q2, along with Russell, Mick Schumacher, and Sainz – who did not set a time.

At the end of the session, Hamilton improved to a 1’23.082 to set the fastest time for the second phase in a row, with Bottas second, and Verstappen third.

Hamilton led the queue of 10 cars out for the first runs in Q3. But whatever happened, his pre-event engine change ensured that he wouldn’t be able to start on pole position.

After the first set of flying laps, Bottas was on provisional pole with a 1’23.071, ahead of Hamilton, then Verstappen who was provisionally set to go to second on the grid, and Pierre Gasly – the fastest driver in FP3 – up to provisional third on the grid.

The sun had now burst through the clouds. Hamilton had a chance to get some time on track to himself, as the nine other drivers who were eligible to take pole position made their final checks before rushing out with around three minutes left, for their final flying laps. With a clear track, Hamilton moved the benchmark time up to 1’22.868.

Verstappen set a 1’23.196 on his last lap, not enough to displace Bottas from the provisional pole. Bottas, meanwhile, could not prevent his Mercedes team mate from setting the fastest time in Q3. Hamilton’s best lap of a 1’22.868 was just over a tenth clear of Bottas, whose time of 1’22.998 was good enough to give the Finnish driver his first pole position since the Portuguese Grand Prix. Leclerc moved up to fourth, putting him third on the grid, ahead of Gasly.