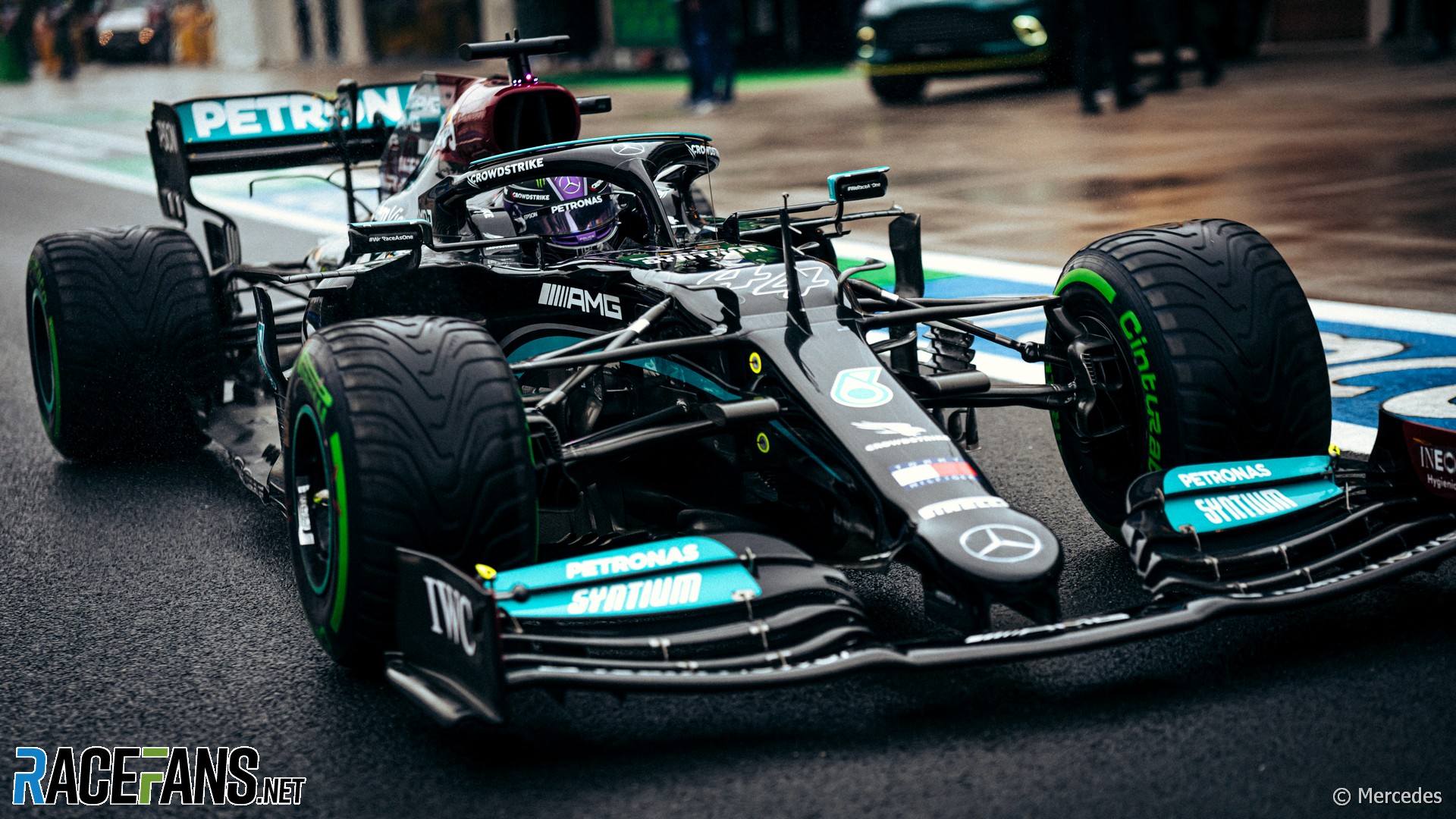 Lewis Hamilton played a decisive role in the strategy call which likely cost him a higher finishing position in the Turkish Grand Prix.

Having made his way up to fifth on a damp track early in the race, Hamilton urged his team not to bring him into the pits when the drivers ahead of him began switching to fresh intermediate tyres from lap 36.

As Hamilton explained, he expected the track would dry out sufficiently that everyone would need to pit for slicks later in the race. He hoped to keep his intermediates alive until then.

Those who switched to fresh intermediate initially experienced a long period of graining which slowed them down. After that the tyres came good and their lap times began to fall.

But once the likes of Max Verstappen, Sergio Perez and others had been through that phase, it soon became clear Hamilton’s decision was not going to pay off.

Fernando Alonso, a lap down following a pair of incidents at the start, was one of the first drivers to pit for a second set of intermediate tyres. He came out of the pits a short distance ahead of Hamilton.

Once that situation had been explained to Hamilton his radio fell silent for the next few laps while he closed in on Sergio Perez. He tried to pass the Red Bull, but was unsuccessful, and lost around five seconds to the cars ahead.

This meant he had fallen out of Verstappen’s pit window – i.e., far enough behind that his championship rival could pit and come out ahead. Red Bull quickly brought Verstappen in to put him on a new set of intermediates and keep his position ahead of Hamilton on the track.

Hamilton told his team to bring him in before Perez to “undercut” him, but this proved impossible, as the Red Bull driver came in the next time he reached the pit lane entrance. Hamilton was therefore still out on his original intermediates while both Red Bull drivers had taken new rubber.

Unsure whether the track would dry out sufficiently for slicks, Mercedes were now in a position where it seemed the only way they could gain a strategic advantage over Red Bull was to stay out.

“The track was drying, we didn’t know when it would dry or if it wouldn’t,” said Hamilton. “We [didn’t] know if it was going to dry or not, but it was slowly getting drier.”

“We could have maybe stopped earlier,” he added, “maybe when I caught Perez maybe we could have could have stopped. But at that point, you just had no idea if it would have been dry or not.”

Mercedes called Hamilton in three laps after his team mate, but he was eager to press on in the hope of gaining a strategy advantage by staying out. He remained convinced the track conditions would improve enough for slicks to be an option.

On lap 46 Bottas passed Leclerc and the Ferrari driver succumbed to the inevitable, pitting for fresh intermediates. That put Hamilton third, but Mercedes were beginning to realise it couldn’t last.

“I was third at one stage and hopeful that I would miss a stop,” Hamilton explained. “[When] everyone else did that inter switch, I was hopeful that if there was another one for slicks that would gain me positions.”

Perhaps Mercedes were hoping that Esteban Ocon, the only other driver still running on his original set of intermediates, would dive for the pits, fit slicks, and begin reeling off quick lap times. But he stayed out until the end.

Finally Mercedes realised Hamilton’s tyres were dropping off at a rate which threatened to drop him even lower than the fifth place he’d been in before the Red Bull drivers pitted. On lap 50 he was told that crucial threshold had been reached.

“Suddenly we were seeing that those places that we lost by doing the stop, we were going to lose anyway on track, to Perez and to Charles” explained the team’s head of trackside operations Andrew Shovlin. “And there was even a risk that was growing from behind if you really sort of dropped off the curve.

Having had Verstappen in his sights at one stage, Hamilton was obviously frustrated at dropping back again. He had been eager to stay out on his original tyres. “It was frustrating at the time because obviously I could see second and then all of a sudden I’m back in fifth,” he admitted.

37 comments on “Radio transcript: How Hamilton’s plan to delay his pit stop backfired”