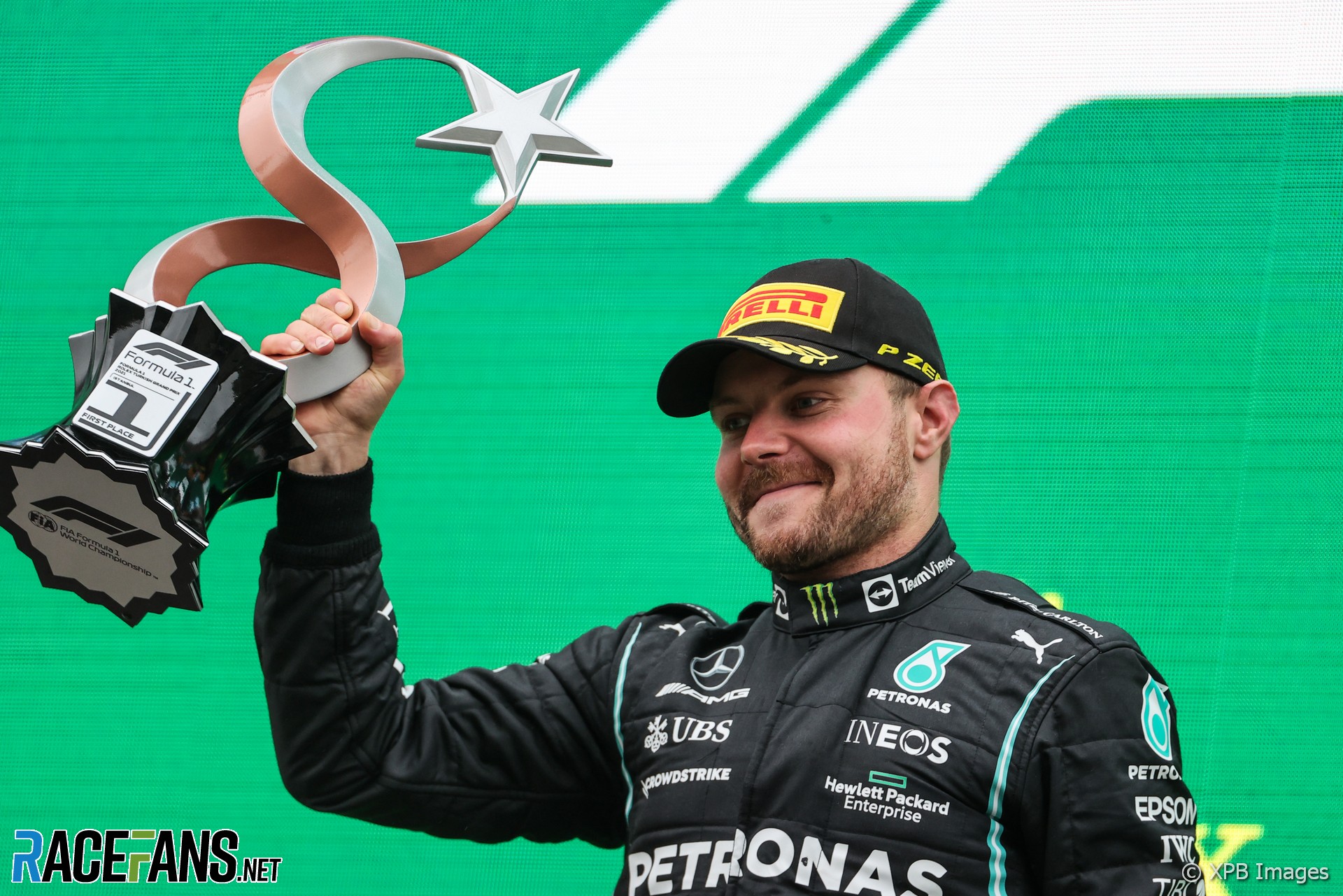 The group of drivers who have won 10 or more Formula 1 races numbers almost as few as those who have won world championships.

While there are 33 world champions, in Turkey Valtteri Bottas became the 35th driver to win 10 races with a classy drive in tricky conditions from pole position.

The 10th win for Bottas occured in the race after Lewis Hamilton reached 100 wins, meaning he now has exactly 10 times as many victories as his team mate.

Among the 35 drivers to have won 10 races Bottas is one of eight who hasn’t won a world championship. They are led by Max Verstappen on 17 wins, though he took the points lead last weekend. The others are Stirling Moss (16), David Coulthard (13), Carlos Reutemann (12), Felipe Massa and Rubens Barrichello (11 each) plus Peterson and Berger.

An honourable mention should also go to Mark Webber, the only driver to have won exactly nine races, who lost a tenth in controversial circumstances in the 2013 Malaysian Grand Prix.

Bottas also scored the 18th pole position of his career, putting him level with Kimi Raikkonen, Mario Andretti and Rene Arnoux. However he only qualified in second place.

Not for the first time in his career, Hamilton was quickest in qualifying but didn’t start from pole position. On this occasion it was due to a penalty for exceeding his maximum allocation of power unit parts. He also lost pole position for the 2012 Spanish Grand Prix when the stewards found there was too little fuel left in his career to supply a sample for testing.

That penalty handed pole position and, ultimately, victory to Pastor Maldonado. He was one of eight different drivers to win a race that year. Victory for Bottas on Sunday made him the sixth different winner of the season so far, the most since 2012.

Bottas set the fastest lap as well, the 18th of his career, equalling Coulthard’s tally. He therefore took a clean sweep of win, pole and fastest lap, something he’s only done once before, at the 2017 Abu Dhabi Grand Prix.

Despite Hamilton’s late fall to fifth, Mercedes out-scored Red Bull for the fourth race in a row, giving them a 36-point lead in the constructors championship. This was also the 250th consecutive points score for a Mercedes-powered car, extending a record which began at the 2008 Chinese Grand Prix.

However Verstappen retook the lead in the drivers’ title fight. With six races to go, that raises the possibility this could be the first year since 2008 that the drivers champion did not drive for the team which won the constructors title.

Sergio Perez returned to the podium for the first time in nine races, and exceeded his 2020 points score by doing so. Pierre Gasly, who came in sixth, is now one point shy of his score from last year. For comparison, there have been 16 out of 22 races so far this season, while last year’s championship had just 17 rounds.

Have you spotted any other interesting stats and facts from the Turkish Grand Prix? Share them in the comments.