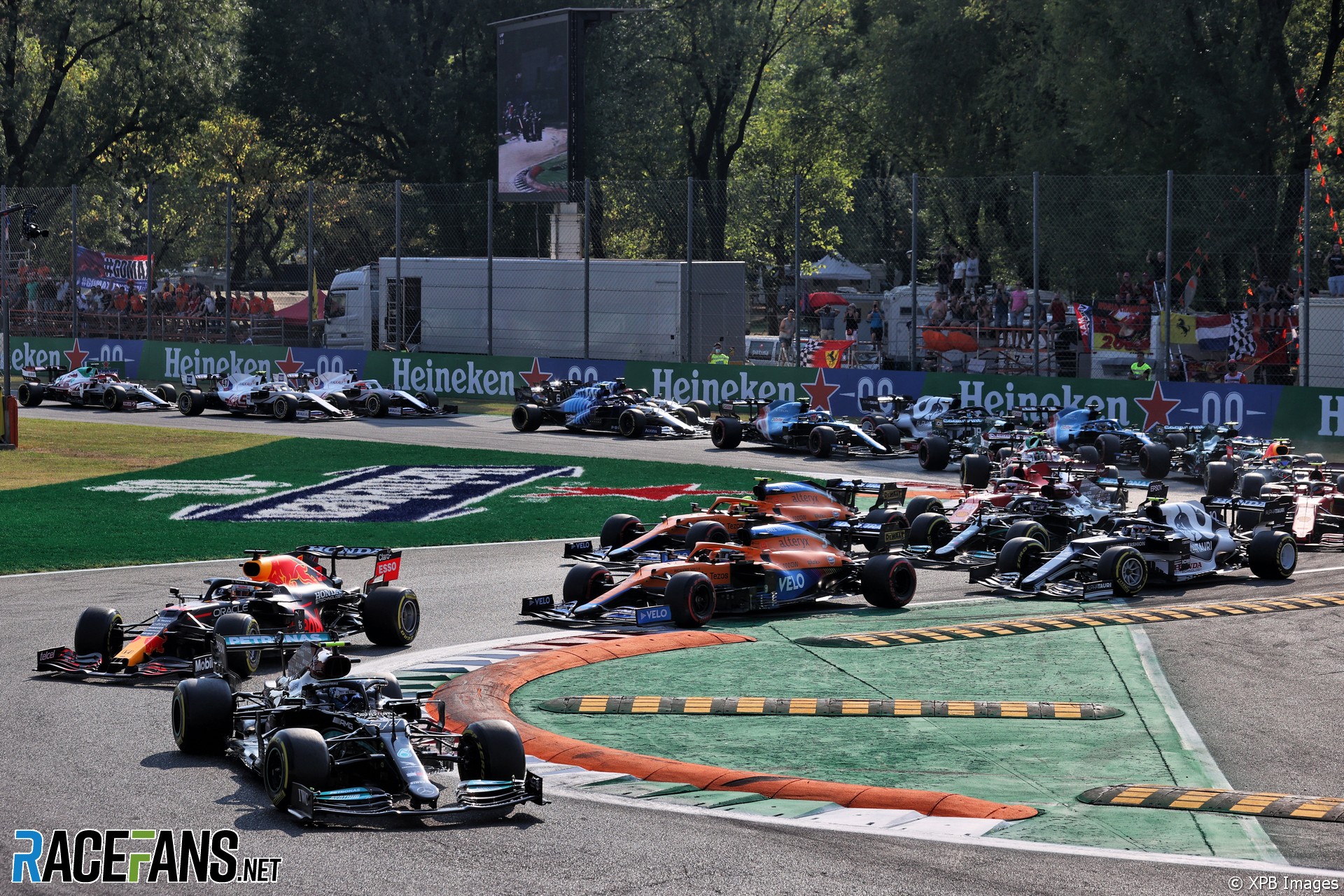 Having conducted two trials of its ‘sprint qualifying’ format, with one more to come in Brazil, Formula 1 is planning six more next year.

As RaceFans revealed yesterday the F1 Commission has agreed in principle to hold another half-a-dozen sprint qualifying events in 2022. The World Motor Sport Council is expected to rubber-stamp the decision.

What remains unclear, however, is how the sport intends to address the flaws and contradictions thrown up by its experiment with the format. F1 has repeatedly insisted fans love the change, glossing over the clearly more critical reaction from many of our readers and those on social media.

It’s too early to say whether sprint qualifying can win over its doubters, or attract enough new fans to the sport to make up for any who may be turned off by it. There most persuasive case for sprint qualifying is that it draws in more eyeballs by replacing practice sessions with competitive action. But with the 2022 F1 calendar expected to expand to 23 rounds, how many people will find the time to watch 50 competitive sessions in 52 weeks?

The praise F1 heaps on the format throws up another contradiction: If sprint qualifying is superior, why not use it at every race weekend?

F1’s argument is that it would not be suitable at some tracks, such as Monaco, because overtaking is so difficult there. But that is an indictment of anything, it is the circuit, not the format. If the overtaking problem at Monaco was that bad, F1 wouldn’t race there at all. And aside from that one circuit, which is an outlier among others in so many ways, are there really that many tracks which would be ‘unsuitable’ for sprint qualifying races?

This also underlines the fact F1 has not yet satisfactorily answered a vital question raised by sprint qualifying: Why should some rounds of the world championship be worth more points than others?

The two sprint qualifying events held so far have largely failed to make good on the promises of spectacular races in which drivers, untethered from the need to preserve tyre or engine life, would push flat-out in the pursuit of a better starting position for the grand prix. And, if they’re at the sharp end, a handful of extra points.

Instead, sprint qualifying has re-emphasised familiar points about the shortcomings of modern F1 racing. Once the excitement of the start has died down and the field has spread out, the cars’ aerodynamics makes passing too hard.

(Arguably, by giving drivers free tyre choice for both races, sprint qualifying has shown F1 could create more interesting strategies by doing away with the ‘Q3 tyre rule’ at all events, something RaceFans readers have previously indicated they want to see.)

Some drivers have suggested F1 needs to encourage variation in the lap times between cars to increase overtaking in sprint races. “My feeling is the sprint is too short and the cars are pretty much driving flat-out every single lap and it doesn’t offer enough opportunity between the cars to be able to overtake,” said George Russell after the most recent sprint event.

But this contradicts a key argument for the sprint format, which was that a shorter race would encourage drivers to push flat out and create more exciting races. Moreover, if the sprint qualifying races were extended beyond their current one-third grand prix distance, would they still be short enough to call ‘sprints’?

The most glaring contradiction of sprint qualifying has always been its name: F1’s insistence on referring to a race as a ‘qualifying’ session. This comes from the top: FIA president Jean Todt made it clear he will not accept the sessions being called ‘races’.

There are other nomenclature problems, notably the idea that pole position is no longer being decided by a true qualifying session. Even F1 drivers have described the re-defining of pole position as ‘wrong’.

But these quibbles over names aren’t merely surface problems. Fundamentally altering traditions which have endured since the first round of the world championship was always going to be a controversial move.

F1 motorsport director Ross Brawn has indicated this problem will be addressed. One solution may be to split the sprint event from qualifying and make it a separate, stand-alone race. But the route may only lead to more contradictions, not least with Todt’s clear opposition to sprint races in F1.

By removing the grid-setting aspect of the sprint format, some other incentive will be needed for drivers to race rather than sit back and preserve their cars. Offering more points is one obvious route, as Mercedes team principal Toto Wolff suggested when RaceFans asked him about the change last week.

“If we were to do more [sprint events] then maybe the format overall needs to be tweaked,” he said. “How many points are attributed, is it really three, two, one or should it go back to 10th place, without undervaluing the grand prix?”

If F1 were to award the top 10 then – assuming they’re not going to deal in fractions of points – the value of finishing tenth in a sprint race would be at least one point, the same as a grand prix. That would obviously under-value the grand prix.

Alternatively it could borrow from Formula 2’s example. It uses the same points system as F1 for its feature races, then gives 15 to a sprint race winner, down to 1 for eighth place. These are in roughly similar proportion to their race distances of 170 and 120 kilometres respectively. Adopting a similar principle, F1 could give eight points to a sprint race winner down to one point for eight place.

If F1 does go down the route of stand-alone sprint races, it will essentially mimic F2’s format, which next year will have sprint races on Saturdays and longer races on Sundays. As well as accepting that similarity, it will also further increase the likelihood the world championship could be decided outside of a grand prix.

Both scenarios would arguably undermine and devalue the status of grands prix, which F1 has said it is eager not to do, and is Todt’s overriding concern. But perhaps the promise of extra eyeballs and greater revenue has proved too great for that to be a consideration any longer.

61 comments on “F1 will have more sprint qualifying rounds in 2022 but can it fix its contradictions?”