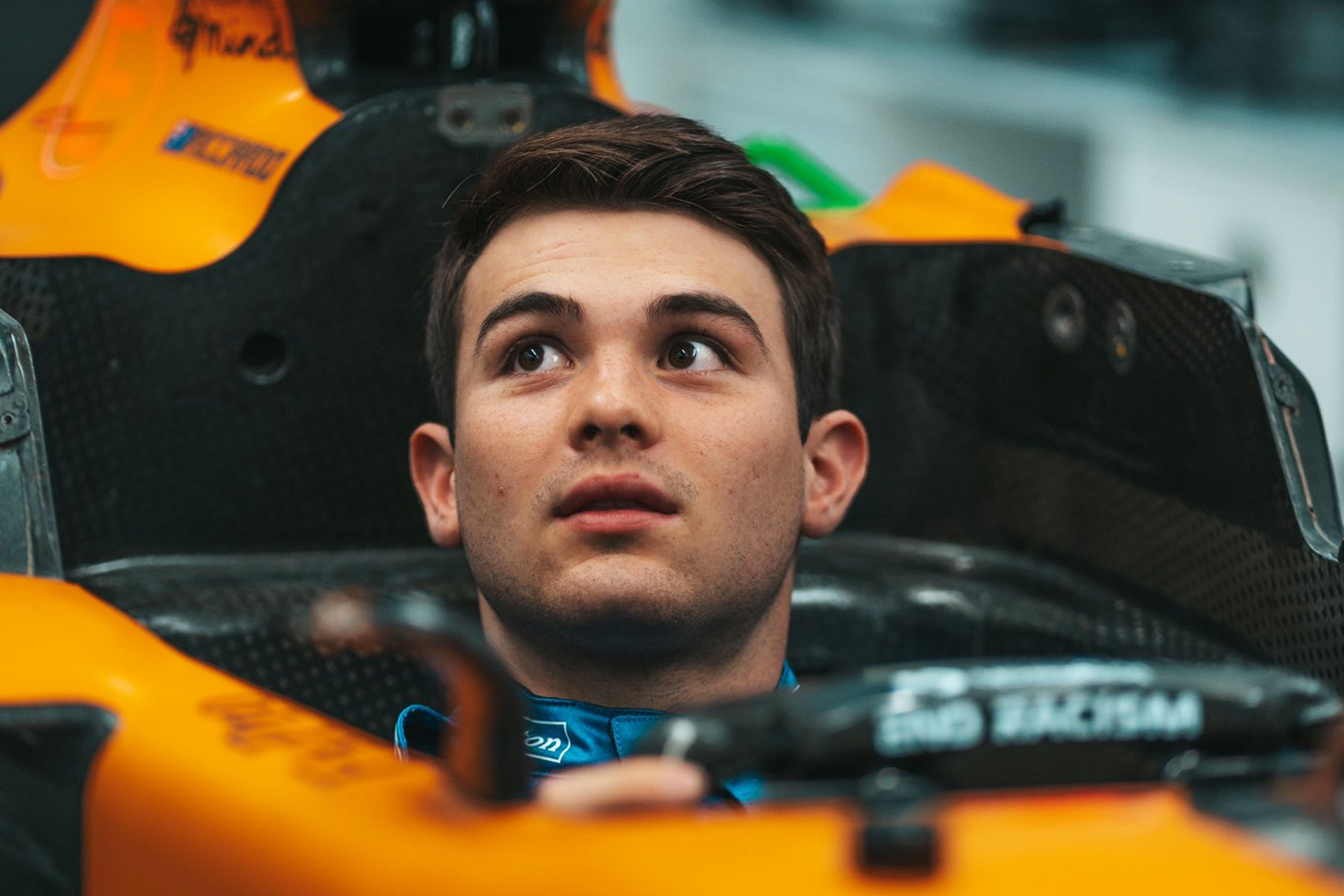 Daniel Ricciardo isn’t the only McLaren driver who will be reaping the reward of a bet victory in the near future.

While the Italian Grand Prix winner is getting the chance to drive his hero Dale Earnhardt’s NASCAR at Circuit of the Americas this weekend, another member of the McLaren family is getting an even bigger opportunity.

Pato O’Ward delivered the first victory for the McLaren SP IndyCar team in Texas earlier this year. The 22-year-old from Monterrey, Mexico took the championship fight down to the final round, where Ganassi rival Alex Palou prevailed.

But O’Ward still has the spoils of that Texas win to look forward to: A first test in a Formula 1 car. And this is no demonstration run in a prior-year car, but a full day at the wheel of the latest McLaren-Mercedes MCL35M at Yas Marina, just days after the season finale.

He visited the McLaren Technology Centre last week for a seat fitting and two days in the simulator to prepare him for the test in just under two months’ time. “This week is where it really started to sink in,” he told RaceFans in an exclusive interview afterwards.

Even for a driver accustomed to racing some of the quickest single-seaters outside of grand prix racing, the first simulated taste of an F1 car clearly made an impression on O’Ward.

“The initial impression is a massive amount of front-end grip versus what I’m used to in IndyCar,” he said. “The car is so much more nimble, lighter. The downforce is tremendous and just the capabilities of braking and everything is really impressive.

“So it’s definitely going to take some laps for me to get used to with it, but I’m really looking forward to it. It looks like a blast to drive.”

O’Ward is well-placed to put the experience of driving a current F1 car into context: Before reaching IndyCar he won the Indy Lights championship, raced in Japan’s Super Formula championship and made a one-off appearance in Formula 2 (as a substitute for the temporarily banned Mahaveer Raghunathan). How big is the step from IndyCar to F1?

“I think it’s a bigger jump from IndyCar to Formula 1 versus Indy Lights to IndyCar,” he says. “Just because of the amount of downforce.

“The way that the braking, the turning in, middle of the corner and the exits, they’re so compressed. Compared to what you have any other car – you have the braking phase and you have the entry, mid and exit, [in] this one the time that you maintain on each phase is basically nothing. Once you’re starting one phase, you’re already going to be starting another one.

“It’s just so much more compressed and things happen so much faster. But man, it felt good in the sim. I can’t imagine what it feels like in the body. I feel like once I get a taste of it, I’m not going to be able to have enough of it, I’m going to become obsessed, I feel like.”

He will use the time between now and his test to get his neck in the best possible shape for the test. “I feel like I’ve got the leg strength and the upper body part, no problem,” her explains. “The IndyCar is quite a lot more physical in terms of driving it just because there’s no power steering and it’s a lot more busy in terms of how you have to hustle the car around.

“I am expecting my neck to feel like my head is going to fall off, though. So I’m trying to get that into a nice area, at least just to be able to drive. I think my neck right now is race-ready for IndyCar, but just in F1 it is quite a lot more stress on the neck, so I’m going to be working on that quite a bit.”

In his simulator run O’Ward had the chance to try the car on two circuits he is familiar with: The Red Bull Ring, where he raced in F2, and Circuit of the Americas, which IndyCar visited in 2019, lapping some 14 seconds shy of F1 times.

He also tackled the Hungaroring, a new circuit to him, with a sinuous middle sector which gave another sense of the startling performance levels of an F1 car.

“It’s so insane how the car is able to stop in such a short period of time in the heavy braking, but then how the car can stop quite fast while you’re basically already in the entry of the corner, it’s really, really impressive. These are the only cars in the world that are able to do that around the circuit just because of how much downforce and grip there is.”

He hasn’t driven Yas Marina on the simulator yet. The model of the revised track configuration which F1 will race for the first time this year isn’t ready yet.

“I’m going to drive it right before I leave for the race weekend, which then leads into the test,” he said. “I’m going to come back around early December, do a full day of Abu Dhabi.”

But with Ricciardo and Lando Norris locked into McLaren’s F1 line-up for the foreseeable future, O’Ward isn’t letting the possibility of a move into Formula 1 distract him from his IndyCar priorities.

“It’s going to be really cool,” he said. “I’m really excited to just learn and see if I can take back anything that will help me next year in IndyCar to try and make the team better, to try and make myself better and challenge for another title.”