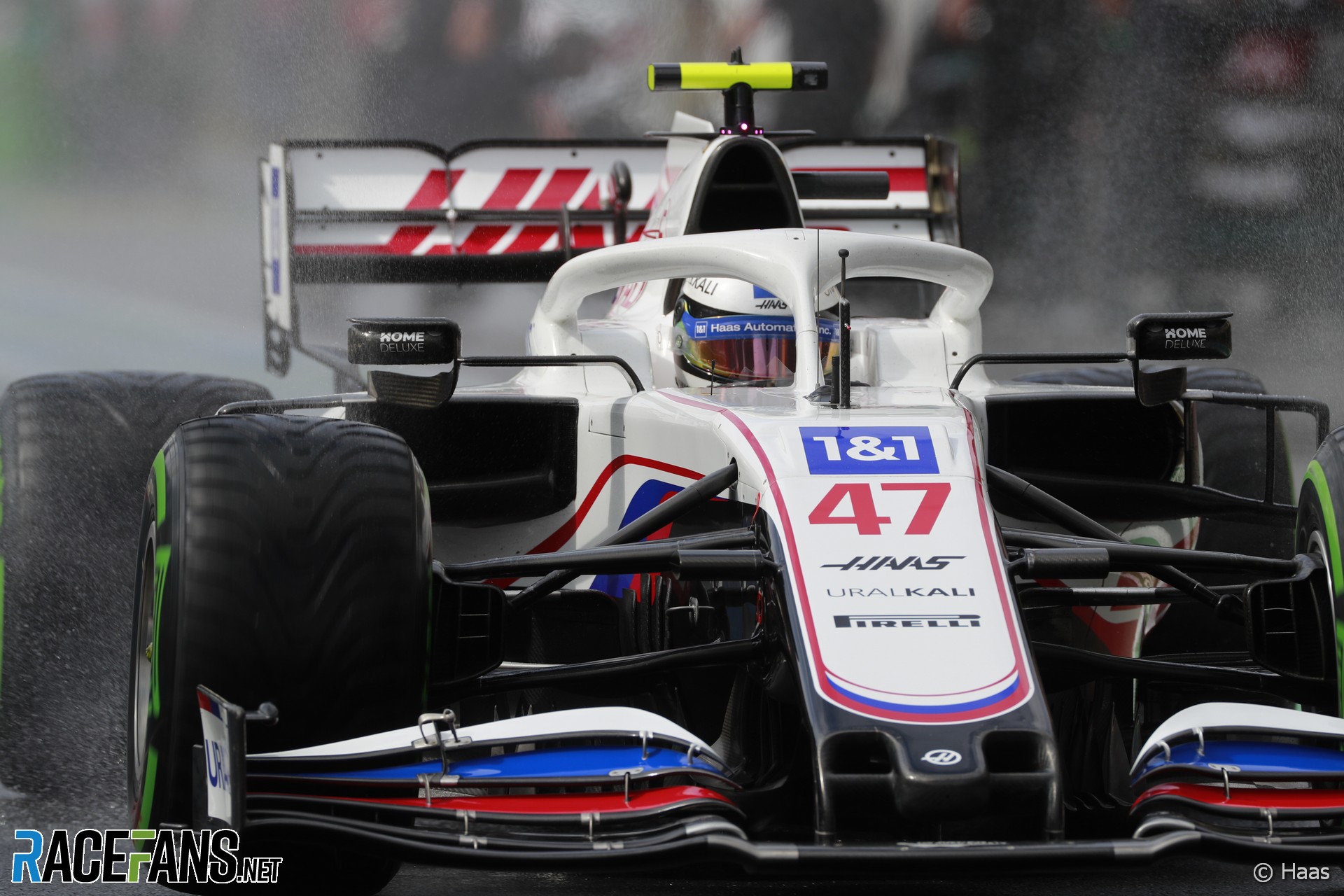 The Turkish Grand Prix wasn’t the first time Mick Schumacher bagged a place in Q2 for Haas during 2021.

But the sole previous occasion at Paul Ricard was somewhat fortuitous. Having lapped quickly enough to escape the drop zone during Q1, the rookie then crashed. That secured his place in the next round, though of course he wasn’t able to participate in it.

Schumacher’s performance on a treacherously wet Istanbul Park circuit was a different matter. Not only did he beat five drivers in Q1 to reach the next stage, he claimed one more for good measure. Schumacher blew his team mate away much as he had at Sochi Autodrom two weeks earlier, lapping a huge 2.894 seconds faster.

Fellow Ferrari users Antonio Giovinazzi and Kimi Raikkonen also floundered in Schumacher’s wake, the 2007 world champion almost two seconds adrift after catching traffic. Schumacher beat Nicholas Latifi in the Williams as well, though he was a tenth of a second off the other FW43B of George Russell.

That didn’t matter, however, as he beat two other drivers to book his place in Q2: Daniel Ricciardo’s McLaren, by three-tenths of a second, and Sebastian Vettel – an enthusiastic supporter of the reigning Formula 2 champion – who was two-tenths away in his Aston Martin.

But despite Haas having racked up 30 Q1 eliminations out of a possible 32 so far this year, chief engineer Ayao Komatsu said he was “not really” surprised Schumacher had risen to the occasion in tricky conditions.

“He did a very good job in changeable conditions,” said Komatsu. “We know the pace of our car this year so these are the conditions where we can out-perform some other drivers.

“He’s done a really good job but it’s not like I was really surprised. He has the potential and it’s all about maximising it, put the lap together at the right moment. So it’s a great result.”

Nonetheless Komatsu said he was impressed with Schumacher’s performance in conditions which caught many drivers out, including his team mate Nikita Mazepin. “It was very difficult because you saw so many people going off,” he said.

“It was very tricky. Nikita went off three times, other drivers went off a few times as well. Mick was really struggling as well.”

The first corner proved especially treacherous and was the scene of several spins. Schumacher gave it extra respect. “He made it into Q2, but with not his fastest lap,” Komatsu explained. “If you compare it against Russell he still lost four tenths in turn one on its own. So he was being careful to try to make sure he put the lap together.

“The rest of the lap on the drier part of the circuit, he was very, very good. So he’s done a good job judging how much margin to take to make sure he can finish the lap, but then pushing elsewhere, so that was a really good balance.”

Komatsu was hesitant to describe Schumacher’s giant-killing feat as his best lap of the season. “I wouldn’t say so, simply because he could have pushed more in turn one. There was a couple of tenths left there. But it was pretty good.”

Schumacher’s performance was all the more impressive as he delivered it at a track he hadn’t previously raced at. “He felt he was actually very prepared having done the simulator session,” Komatsu explained.

“Sometimes – before Zandvoort, I think – he couldn’t get the simulator session in before that so [in first practice] he was slightly on the back foot. Where he felt here he had a good preparation straightaway.”

Although Haas have had little to compete for this year, Schumacher has impressed the team with his work ethic and analysis of the areas he car improve. “Mick works really hard, whether he has a good weekend or a bad weekend,” said Komatsu.

“He’s really self-critical in a good way. He’s always looking for areas to improve. When he’s talking about ‘okay, I’ve done this wrong, I need to improve this’, it doesn’t actually depress him, it just gives him more motivation. So he’s always looking at himself.”

“Also he works really hard with his engineers,” Komatsu added. “Mick’s engineers are really motivated by Mick’s attitude as well. So it works both ways.”

In his 16th race weekend as a Formula 1 driver, Schumacher felt confident enough to carry overnight changes to his car into qualifying despite being unable to check them on a dry track as final practice was hit by rain.

“In car set-up as well we made some changes overnight,” said Komatsu. “Of course, he didn’t have a chance to test it in dry conditions in [final practice], but that’s something that worked before when Mick was more competitive.

“So they tried that set-up and they managed to pile on lots of a lot of car balance during qualifying session. So again, that gave him confidence in terms of front-end as well.”

Schumacher’s gains weren’t the product of a sudden breakthrough, but a steady accumulation of progress over his debut season according to the engineer.

“He’s constantly learning and improving and absorbing every single time. For instance there’s [been] some weekends where he crashed in some free practice session that had an impact on his qualifying performance, et cetera. Sometimes we sit down straightaway, sometimes we talk about it a week later or at the next event, but we never leave things unanswered or not looked at.

“He works very closely with his engineers as well. I work closely with him as well in terms of the philosophy of how you approach the weekend, what we’ve done wrong, what was the mindset for making certain things happen either positive or negative, then trying to put more and more positives together for the future weekends.

“So I can’t really pinpoint one weekend where he made a step – I think he’s just constantly looking for improvements.”