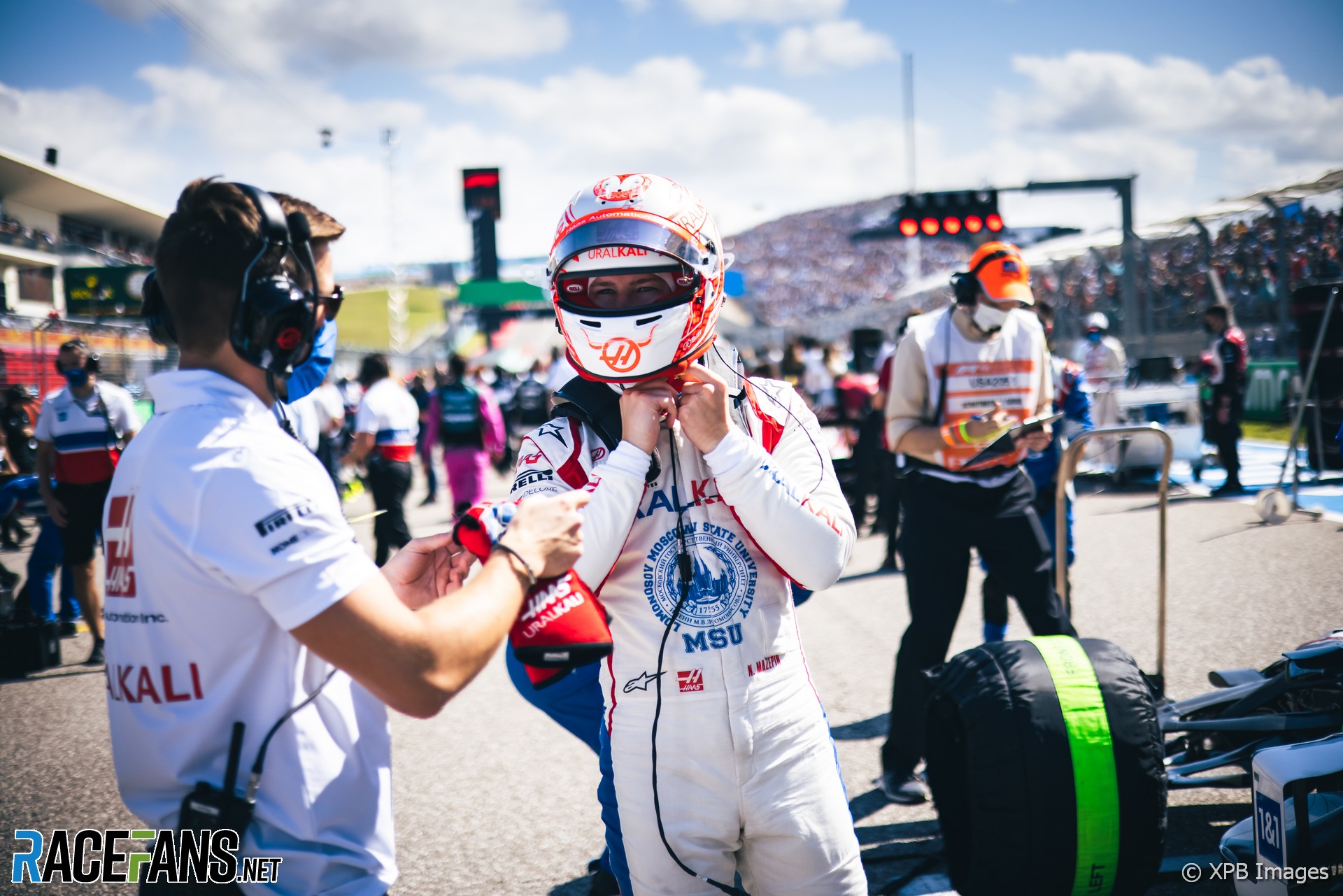 In the round-up: Nikita Mazepin explained a series of problems he suffered during the United States Grand Prix weekend.

Mazepin plagued from head to toe during US Grand Prix

Nikita Mazepin suffered a particularly luckless weekend at the Circuit of the Americas. The problems began during Friday practice, when he had to pit due to a problem with his new helmet.

“I did a special edition Austin helmet,” Mazepin explained, “and I’ve been struggling a lot with Bell helmets this year, the visor. Sometimes you get a bad visor and then it has a hole in there in it, or like a small hole where the air goes in.

“So at 330kph, it does keep your right eye open, which is not ideal because it starts crying and watering, so I was just upset about that.”

The tears didn’t stop there, however. During the race he reported severe heat in the footwell of his Haas, something he previously experienced during the Hungarian Grand Prix.

“I’m also crying inside the car with how feet are burning,” he told his team on the radio. “It’s like they’re standing on something very hot. We’ll need to investigate.”

He had already been forced into the pits on the first lap when his headrest detached. Race engineer Ayao Komatsu apologised for that problem when Mazepin returned to the pits having finished the race two laps down in 17th and last position.

Esteban Ocon said Alpine did not expect as hard a race as they had in Austin after improving their car during practice.

“We didn’t expect to to struggle, obviously, as much as that,” said the Alpine driver, who retired from the race with an unidentified technical problem.

“We had to fight the car quite hard through practice. But we did good improvements all the way through every session. Qualifying was not as good as what we hoped but we improved it a lot from FP1.

“And in the race a big, big struggle again. So we need to analyse and come back stronger from it.”

Ocon drew some consolation from his view that few other venues offer a similar challenger to COTA. “It’s a track on it’s own, I would say. The track is very rough in comparison to other places. It’s quite bumpy. So there’s many aspects that we will look into.”

She said that the expectation of defending the 2019 title had pushed her to improve her racing. “I think there was pressure coming in,” she said.

“I definitely came in with the expectation, from myself but from other people as well, to be in the best position to challenge for the title again so of course there was pressure. But I felt positive, with that.

“I had the confidence from the year before and also just the feeling that this year was going to be an even more important year, so to relish the opportunity even more. I think every race, there is always a bit of expectation there but I think it kind of helped me raise my standards and I think that, combined with the fact that Alice pushed me so hard put the pressure on.”

Despite back-to-back titles – and a stint in off-road electric series Extreme E – Chadwick said her future was uncertain, currently.

“I don’t know at the moment,” she said, on what she would move on to. “The opportunity W Series gives us all – but particularly for me, as a double champion, I think is huge. So I’m going to relish that, take it in as much as I can and hopefully step forward into bigger things.”

Dear @F1, it is useless to bring celebrities to races and then they give no interviews to Martn Brundle and Sky. If they want privacy, they may as well stay at home. Thanks for actor Ben Stiller ingnoring this «I give no interviews» attitude

I’m just not over that race. It was just so, SO excellent. Just proves you don’t need crashes and heaps of overtakes to make a good race. I am so incredibly pumped for the final five races. #F1 #USGP

At the end of another season, here's a look back on how Ford's rising stars ranked 📈

"I noticed there was a lot of stuff lying around coming to the track. I know it's a big event and you have fun, you should have fun. But please do not litter and get your stuff in the bin. It makes the life a lot easier for all the people who have to clean up.

"Li had a similar issue a lap later, this time mounting the rear of Hu. He stopped, while the ruptured fuel tank of Hu’s car set on fire, requiring the safety car. Dust was laid down where fuel had spilled, while the safety car picked up fourth rather than Chang."

"Bailey: 'What an incredible day for both Jamie and the entire team at Veloce. We’ve secured our first championship in only our first year of competition and Jamie has become a two-time W Series champion – it doesn’t get much better than that!'"

Although sides have been drawn plenty of times, Bernasaurus says that the 2021 title battle is as wonderfully balanced as perfectly set up F1 machinery:

Max and Lewis really are in their own league though. We talk about suspension tricks, weather, graining, ICE’s and penalties, collisions etc. But the reality is Checo and Valterri have been nowhere near them this season other than the occasional spark.

I’m not sure if Max or Lewis will win it, nobody is, that’s the beauty of it. I’m not sure which is the quicker car if you aggregate it over the season. Both cars have their merits.

Whichever of the two of them loses, shouldn’t despair on it, they’re both performing incredibly. And I know it’s a cliche, but ‘neither of them deserve to lose’.

But someone has to win.
@Bernasaurus