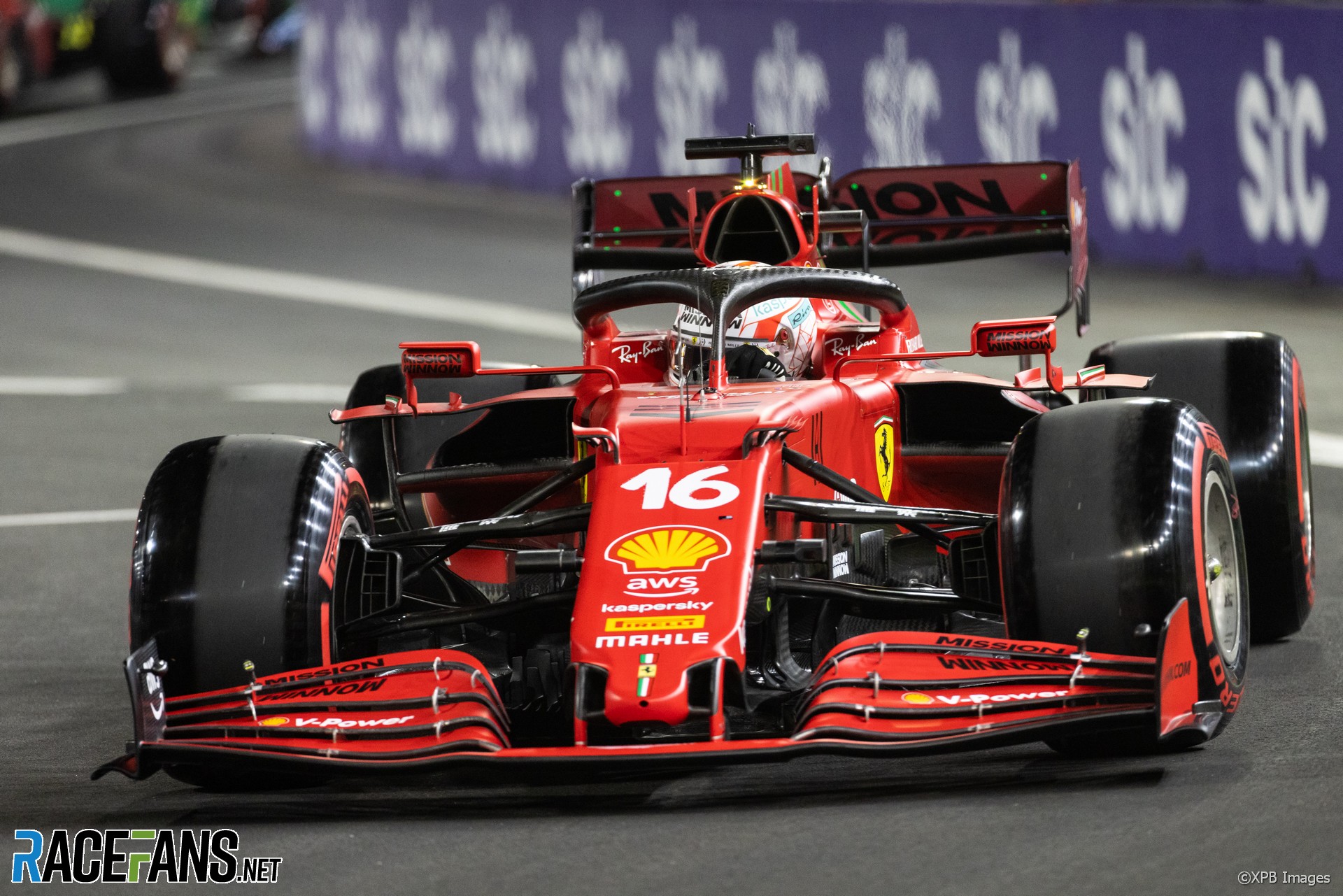 In the round-up: Ferrari team principal Mattia Binotto says the team will not be satisfied with third in the constructors championship, but will hold onto the positives of that position as it goes into the off-season.

Ferrari will get ‘serenity’ from beating McLaren in title race

Ferrari has key positives to take from finishing third in the standings this year if they stay ahead of McLaren, says Binotto, even though it means another year of the team failing to meet its “real objective”.

The early red flag in the Saudi Arabian Grand Prix hampered Ferrari, whose drivers Charles Leclerc and Carlos Sainz Jnr spent much of the race in battle en route to finishing seventh and eighth. They even battled each other for position on the final lap, and by finishing ahead Leclerc now has a 8.5-point advantage over his team mate, and Ferrari have 38.5 points in hand over McLaren with 44 left to score in the Abu Dhabi Grand Prix.

“It’s great to finish third but I think it’s really the best we could have done this year,” said Binotto. “We know that’s not the real objective for Ferrari. We know that we are the best, and the best hypothetical is still very big.

“But I think we can somehow be satisfied for this season, we are really looking ahead at the next one. Finishing third, somehow it gives us some serenity for the wintertime, trying to work well on what’s the next year’s car.”

Ferrari was the first to shut its factory when the Covid-19 pandemic arrived, and also had a heavily disrupted build-up to the 2021 season due to the pandemic. Their Saudi weekend included crashes for both drivers, so to leave with a strong points haul has increased morale ahead of what looks to be a more ‘standard’ winter once the team returns to Italy.

In addition to being buoyed by his unexpected fifth place in the Saudi Arabian GP, Daniel Ricciardo was entertained by the battle at the front between Lewis Hamilton and Max Verstappen, which he even described as “battle royale” such was its intensity.

“It’s a really cool battle, it’s a great story, and obviously they’re going toe-to-toe and it’s a real genuine battle,” Ricciardo said. “Some part of envy not being a part of it, but ultimately for the sport and as a fan of the sport it’s a dream scenario.”

Ricciardo all but secured himself eighth in the championship standings with his performance in Jeddah, with 15 points between himself and AlphaTauri’s Pierre Gasly behind. However the weekend’s race did confirm Ricciardo won’t beat his McLaren team mate Lando Norris in the championship this year.

Stoffel Vandoorne and Nyck de Vries will make up Mercedes’ Formula E line-up once again next season, but before that begins on January 28th next year they’ve been handed the chance to test IndyCar machinery.

Both were at Sebring yesterday. Vandoorne reuniting with his old F1 squad McLaren in the former Schmidt Peterson team it now holds a majority share in while FE champion de Vries tested with this year’s Indianapolis 500-winning team Meyer Shank Racing.

Also in action at the track were recent Formula 2 stars Callum Ilott and Jack Aitken. Ferrari junior Ilott was with the Juncos Hollinger Racing team he will race for next year, while Aitken was getting his first taste of the series with Ed Carpenter Racing as he targets a seat with the team for 2022.

The non-championship Formula 4 United Arab Emirates round which was expected to take place at the Abu Dhabi Grand Prix has been confirmed with less than a week’s notice, after long-running speculation surrounding supply chain problems.

Manufacturing and distribution of data loggers and ECUs were already behind schedule. Freight delays also led to several teams being unable to compete as their cars remain on boats while those sent by air freight have managed to reach the UAE.

Of the four teams now confirmed to take part, Prema is the only one to reveal its line-up, including Mercedes Formula 1 junior Andrea Kimi Antonelli.


A close shave for Fernando as he manages to avoid the wall *and* the traffic after spinning on Sunday 😮 🔄#SaudiArabianGP 🇸🇦 #F1 pic.twitter.com/pH3e4FfnwW

Is your Monday as good as @nyckdevries’? pic.twitter.com/K599rBpPoc

Our 2021 drivers, cars, teams, and circuits are available NOW on the 2021 @Formula1game in a free update!

"Kazuto Kotaka was fastest for TOM’S on a wet opening day of post-season Super Formula Lights testing at Suzuka, with 15 drivers taking part. It was B-MAX Racing’s Kakunoshin Ohta setting the pace in the morning as he posted 38 laps and a fastest time of 2m05.663s. Nobody surpassed his lap tally, but Super Formula racer Nobuharu Matsushita was just 0.124 seconds slower than Ohta as he did development work for the B-Max Engineering team."

"Dale Coyne, Jimmy Vasser, and James ‘Sulli’ Sullivan are expected to bring an end to one of the longest co-entry relationships in the IndyCar paddock. Racer understands Coyne, who added Rick Ware Racing as a co-entrant on his second Honda-powered entry in 2021, will announce HMD Motorsports as the replacement for Vasser Sullivan with Indy Lights runner-up David Malukas as the driver"

"The great thrill of watching Max Verstappen lies in his scant regard for self-preservation. He will thread the needle with his overtakes and push his machinery until it sparks and shudders, betraying not the slightest fear of crashing. For most of his seven seasons in F1, such heedless exuberance has made him a joy to behold. But now that a maiden world title begins to slip from his grasp, it is making him a menace."

The FIA set a poor precedent with its penalty for Max Verstappen, says @Slowmo:

I think the big thing here is intent and the problem they have is there is some doubt around what the intention of both drivers was at this time. Regardless of everything it’s pretty clear the entire situation was created by Verstappen attempting to give up the place at the part of the track that would benefit him most and that is not in the spirit of the sporting regulations.

Whether he deliberately brake tested Hamilton or was just trying to manufacture the chance for him to not give up the place is debatable and that was likely what tipped the stewards to the 10s penalty rather than the 20s they could have given in my opinion.

I voted for fairly lenient in light that they at least gave a penalty that suggested a bit more than it being a minor infraction while also stating both drivers were likely using some gamesmanship.

It’s always dangerous to start saying penalties were not a penalty just because they didn’t influence the driver losing positions. That being said the entire conduct of Verstappen throughout the race with numerous incidents certainly warranted more than a slap on the wrist and I fear trying to protect the championship battle the FIA are taking us down a pretty poor route for the future given the precedents they’ve set protecting Verstappen this year. The suggestion from this race is you drive dangerously and only get a 10s penalty, that’s pretty scary stuff for the future.
@Slowmo

Happy birthday to Stretch and Matiascasali!